Written by Chris and Melissa Bruntlett, the co-founders of Modacity.

Cycling to work or school is a commendable act. Each and every member of our family does it on a daily basis, providing regular physical activity that has lead to fewer sick days, and an increase in productivity and overall health. But over the years, we’ve come to realize Vancouver has an unnatural obsession with biking to work, with an entire array of unintended consequences. And as we’ve written before, the trip to work remains an often-overemphasized statistic (making up just 16 per cent of all trips), but one that city officials and advocacy groups focus disproportionately on, likely because it’s the trip on which they have the most data.

Consider this simple fact: The average North American work commute is ten miles (16 kilometres) in one direction, while the average shopping/errand trip is just two miles (three kilometres). If we are truly striving for mass uptake and increased mode share, the conversation around cycling needs to move away from facilitating the daily commute of individuals, and towards the everyday transportation needs of entire families. Lucky for us, the latter just happens to be the lowest hanging fruit. HUB’s biannual Bike to Work Week undeniably serves a purpose, but are we better off encouraging citizens and local businesses to participate in a Bike to Shop Day?

Looking at the most celebrated and successful cycling cities around the world, it becomes immediately obvious that they prioritize mass cycling numbers beyond the humble commuter. From protected bike lanes on busy high streets, to road diets and traffic-calming measures, planners are building infrastructure that encourages shorter trips to shops, restaurants, and other extra-curricular activities. And while Vancouver has done excellent work in recent years, the inevitable backlash every time a project is proposed means we’re falling further and further behind, even compared to our North American peers. So why is it important that things change? 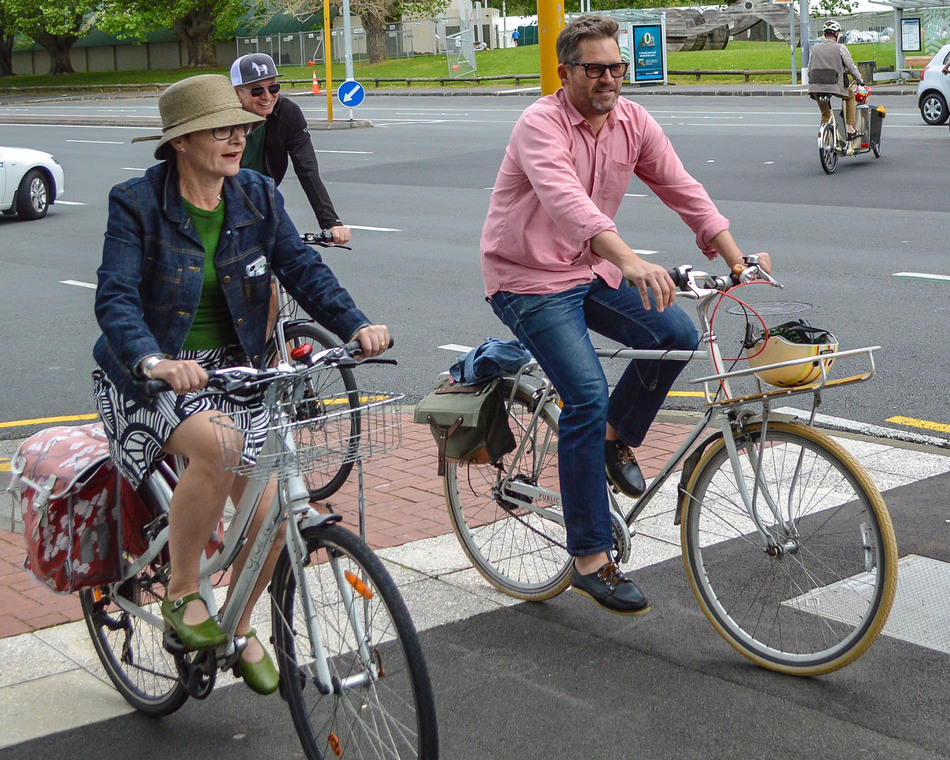 While commuter cyclists certainly do a world of good for their health, while reducing congestion and improving air quality, they display some destructive habits remarkably similar to their motoring counterparts. This type of ‘vehicular cycling’ is fast and furious, where the goal is simply to get from A to B as quickly as possible. Things slowing their momentum – stop signs, red lights and even other cyclists – are a major inconvenience, and treated as obstacles. Constant motion is of great importance, explaining the wide use of clip shoes, an invention designed to aid racing cyclists over marathon-like distances, not in stop-start urban environments.

The commute to work isn’t a race. But this detrimental mindset – further reinforced by the presence of showers and change rooms in the workplace – creates the incorrect perception that biking to work is only for the fit and the brave. It becomes prohibitive to the average person looking for an efficient, enjoyable, and economical way to get around their city. We honestly can’t count the number of times we’ve been riding along and had someone hunched over a carbon fiber bike zip dangerously past us, blow through a stop sign, and dodge precariously around an automobile, only to have us pedal slowly up next to them at the next traffic light. 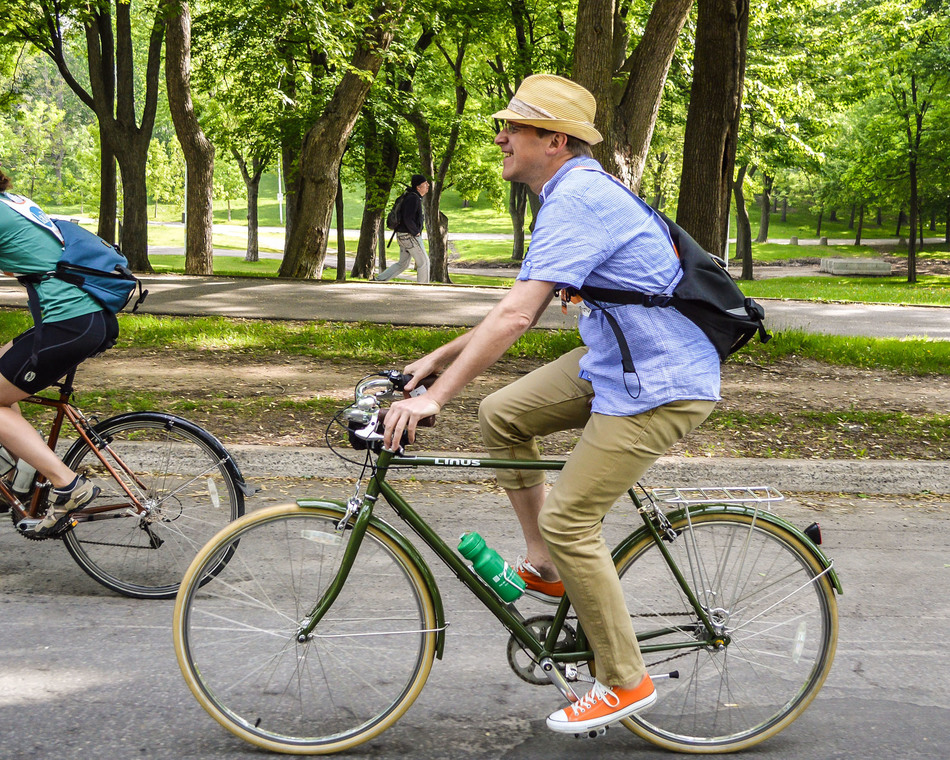 It goes without saying that endurance and sweat is not everyone’s cup of tea, so focusing on the minority capable of riding longer distances to work (usually fast-moving, hunched and helmeted) often neglects the majority who will never attempt it. However, with the correct infrastructure, policies, and marketing schemes in place, many more could be convinced to make the quick, 10-minute jaunt to the grocery store, coffee shop, or doctor’s office (likely slow-moving, upright and un-helmeted). Barriers such as hills and rain are also less of a factor when considering these more casual and spontaneous journeys. Evidence from the Netherlands suggests exactly that, where cycling acts as an extension of walking rather than driving, and the vast majority of bike trips are less than two miles or 20-minutes.

It stands to reason that fostering more errands by bicycle is a far easier endeavour than convincing folks to ride 30 kilometres to and from the office. But in order to accomplish that, we need to facilitate those trips, and reducing them to the exposed space between parked cars and moving ones is not an acceptable solution. That means not just creating ‘bicycle highways’ such as the 10th Avenue Bikeway, but complimenting them with protected bike lanes on busy high streets like Commercial Drive, Main Street and Broadway – routes the average family would safely use for a quick, 20-minute trip to the store, a child’s dance class, or a meal out with friends. 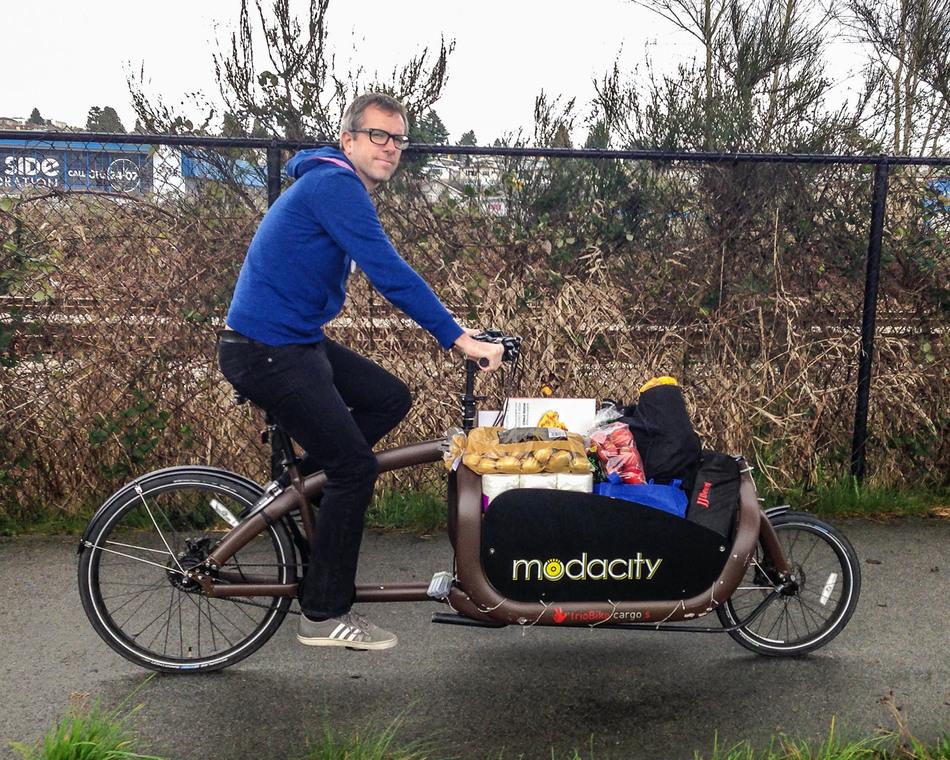 And so, if the end goal is for the bicycle to become a serious, convenient mode of transportation in Vancouver, we must shift our focus from commuter cycling to utilitarian, multi-purpose trips. By appealing to those who may never bike to work – but would be willing to pedal shorter distances to run errands – we could start “normalizing” the act of cycling, and seeing ridership numbers rivaling other successful cycling cities. We may never be Amsterdam or Copenhagen, but that doesn’t mean we can’t strive to be a place where our citizens can get around securely and comfortably on two wheels, no matter what their destination might be.

Chris and Melissa Bruntlett are the co-founders of Modacity, a multi-service consultancy focused on inspiring healthier, happier, simpler forms of urban mobility through words, photography and film. You can find them on Twitter: @modacitylife.