If you didn’t live in this city in 1994 or aren’t old enough to remember it, you probably won’t understand why Vancouver still holds that team in such high regard. After all, they did lose game 7 of the Stanley Cup Final.

But 1994 holds a much different spot in my heart than 2011. In 2011, they lost the Stanley Cup. They should have won, they had the best team. The 1994 run was different. They were a Cinderella team of sorts that lost to a team loaded with many more star players. That’s why they had a parade/rally at BC Place to celebrate almost winning the Cup (something that didn’t happen in 2011).

The Canucks didn’t exactly have a long and storied history in the early 1990s. The team had been generally terrible for over 20 years and had never been a Stanley Cup contender. From 1970 to 1991, the Canucks had won exactly three playoff series (all of which came in their improbable/fluke run to the final in 1982). That’s when the first truly “good” era of Canucks hockey came into place. Lead by the likes of Pavel Bure, Trevor Linden and Kirk McLean, the Canucks won their division and won a playoff series in 1991-92 and 1992-93. They were legitimate Stanley Cup contenders. They were exciting. They made Vancouver into a hockey town.

The Canucks entered the 1993-94 season with probably the highest expectations in club history to that point. They were coming off consecutive Smythe division championships and had a core group of young players that were seemingly coming into their own.

The 1994 season was one of the more interesting seasons with regards to trades and acquisitions. The Canucks traded longtime Canuck Doug Lidster for John Vanbiesbrouck in the offseason. The deal was done to protect 25 year old Kay Whitmore in the upcoming expansion draft. Vanbiesbrouck was claimed in the expansion draft by the Florida Panthers and rules stated that no more than one goalie could be claimed from the same team, so Whitmore was safe.

Pat Quinn made possibly the best waiver wire acquisition in Canucks history, claiming 23 year old Martin Gelinas from the Quebec Nordiques. Gelinas would become a fixture on the Canucks’ second line and had a few excellent seasons in Vancouver.

Petr Nedved was a season-long holdout after having a breakout season. Eventually the St Louis Blues signed the restricted free agent and an arbitrator ruled that Craig Janney would be coming to Vancouver as compensation (the Canucks argued that Brendan Shanahan be used as compensation instead). Janney refused to report to Vancouver though, so the Canucks traded Janney’s rights back to the Blues in exchange for Jeff Brown, Bret Hedican and Nathan LaFayette. That move changed the fate of the Canucks season, improving their depth and giving them a power play quarterback. 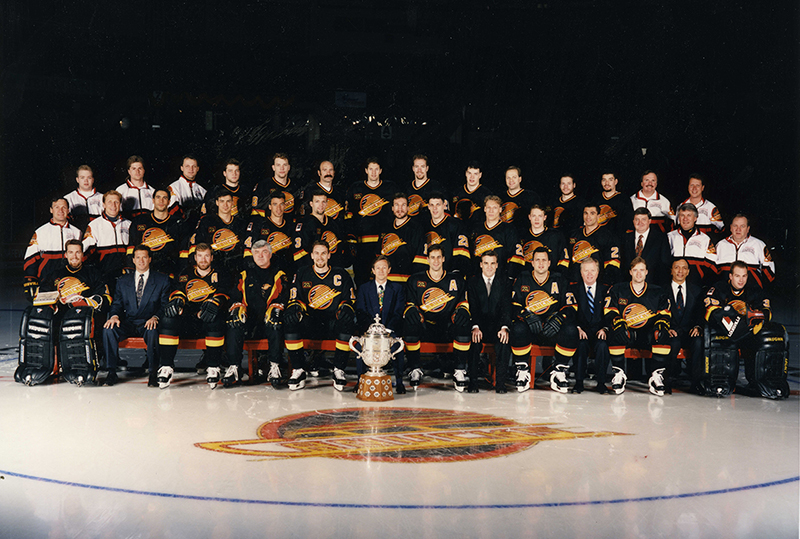 It’s been 20 years, so I forgive you if you forgot what the 1994 team looked like. Gino Odjick played a big part of the team during the regular season but was often a healthy scratch in the playoffs, with Shawn Antoski used in favour of him. Dana Murzyn missed most of the 1994 run due to injury, opening the door for journeyman Brian Glynn to take his place. Here’s how they lined-up for a majority of the playoffs:

Here are the Canucks scoring leaders from the 1994 playoffs:

The regular season was filled with turmoil and underperforming, apart from yet another 60 goal season from Pavel Bure (still a team record). Kirk McLean had a losing record, and Trevor Linden had his lowest point output in four years. The team made a number of roster moves in-season, but it appeared they started to gel just in time…

The Canucks finished the season 7th in the Western Conference, setting up a matchup against Theo Fleury, Joe Nieuwendyk, Al MacInnis and the heavily favoured Calgary Flames. The Flames got up 3-1 in the series and looked poised to close out the struggling Canucks. But then the Canucks’ season turned around. Geoff Courtnall and Trevor Linden each scored in overtime of games 5 and 6, respectively, to force a decisive game 7. A late goal by Greg Adams sent the game to overtime (people often forget this), allowing Kirk McLean to make what is now known as ‘the save’ and Pavel Bure to score the most famous goal in franchise history.

The second round pitted the Canucks up against the Dallas Stars. The Stars were in their first season in Dallas, since moving from Minnesota. They were also heavily favoured to beat the Canucks. Dallas finished 12 points ahead of the Canucks and were led by 50 goal scorer Mike Modano. That seemed to matter little, as the Canucks were rolling and steamrolled the Stars in 5 games. Pavel Bure also steamrolled Shane Churla.

In the third round, the Canucks got to play the hated Toronto Maple Leafs. Once again, the Canucks were the clear underdogs. With Doug Gilmour, Dave Andreychuk and Wendel Clark up front and Felix Potvin in goal, a lot was expected from Toronto. The Leafs finished the year with 98 points and had been to the conference final the previous season. The Canucks dropped the opening game of the series, but pulled off four straight wins, capping the series off with Greg Adams’ now famous goal in overtime to send the Canucks to the Stanley Cup final.

The Canucks got to sit back and wait for their opponent in the 1994 Stanley Cup final, and watched Stephane Matteau’s overtime heroics in game 7 of the Eastern Conference final send the President’s Trophy New York Rangers to the final (I often wonder if history would have been different if they got to play New Jersey instead). Much different than the 1982 final, the Canucks actually had a chance to win it all this time, and came very close to it. Kirk McLean absolutely stole game 1 with a 52 save performance (in my opinion, the best performance ever by a Canucks goaltender). The Rangers won games 2, 3 and 4 and Manhattan was poised for a big celebration ahead of game 5. That wasn’t to be, and the Canucks rallied off two in a row, setting up a dramatic game 7 at Madison Square Garden. Despite an amazing effort, including two goals from Trevor Linden, the Canucks fell short, losing 3-2, giving the Stanley Cup to the Rangers.