The first five days of London have been exciting for competing Vancouverites – do you know how they finished?

Those that have been following closely over the past five days in London could tell you that these Olympic Games have been different than nearly all others within the modern era. The digitization of coverage – including streamed results and live action through Twitter and other social media outlets – has effectively worked to change the Olympic scene forever.

For the Canadian squad, it has been a tumultuous first five days. Earning their first medal two days into the competition (a Bronze in 10m synchronized platform diving) was a breakthrough – and Canada’s fastest medal in a while. It took five days to strike in Beijing. The total is at six at the end of day 5.

For your local UBC contingent, the first five days have been and up and down affair. The obvious positive is veteran and UBC alumni Brent Hayden claiming the bronze in the 100m freestyle swim. What an amazing achievement for a truly deserving athlete. Don’t worry; this won’t be the last we see of Hayden these games.

Ryan Cochrane (Swimming) of Victoria was the first victim of a technicality at this year’s games, when an appeal for South Korea’s Park Tae-Hwan was reversed, booting Cochrane from eighth lane in his final to ninth, and ending his games.

UBC alumnus Scott Dickens (Swimming) set a Canadian record for the 100m breaststroke in his qualifying heat. However, he went over the deadly one minute mark in his semi-final to finish last and miss his chance at a finals appearance and a medal shot.

UBC student Martha McCabe will swim in lane seven in the final heat in the Women’s 200m breaststroke for a medal on Thursday. She had the fastest time for a swimmer outside of the top six finishers. Thunderbird Tara Van Beilen did not make the semifinal stage. 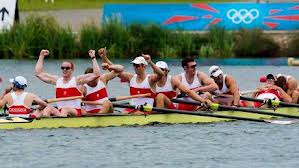 In other Canadian action, the Men’s eights row squad won the only Canadian silver claimed so far, while weightlifter Christing Girard captured a rare bronze for the great white North.

Look for amazing action coming up in the coming days, with the track and field competition and more Vancouverites competing!