Britain’s finest music was the central focus of the grandiose closing festivities that included a Spice Girls reunion and The Who.

On Sunday evening, the games of the thirtieth Olympiad in London officially came to a close. In his departing speech, IOC president Jacques Rogge called the London 2012 games “happy and glorious” – evoking memories of Britain’s own national anthem. Before he spoke, however, there were a number of formalities to get through.

British acts from all decades were on hand to celebrate the conclusion of the summer games. From one-hit wonders like Madness, to Brit-pop icons George Michael, Take That, and The Kaiser Chiefs, no musical taste was left unsatisfied. Even musical legends Queen (Brian May and Roger Taylor, at least), Muse, and Ray Davies (of The Kinks) made memorable brief appearances.

Undoubtedly, the most remarkable and memorable moment of the evening was the first-ever reunion of The Spice Girls. The smash pop sensations failed to disappoint, performing their hits Wannabe and Spice Up Your Life to a roaring ovation. The girls looked more energized and attractive than ever, especially after an over decade-long hiatus. As usual, no smiles out of famous spouse Victoria Beckham (AKA Posh Spice). 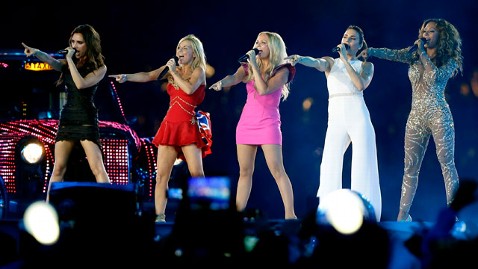 The Who took the responsibility of closing out the British portion of the evening with a standout set, including classics Baba O’Riley and My Generation. Despite their advanced ages, lead singer Roger Daltrey and guitarist Pete Townsend still managed to rock as hard as ever. Surely, despite their best efforts, the two managed to not die before they got old.

The emphasis than took a turn to the passing of the Olympic flag and responsibility to Rio de Janeiro – the capital of Brazil and the host of the 2016 summer games. With unique displays of colour and tradition, the Brazilian contingent presented the introduction to what will surely be a remarkable Olympic experience. Rio mayor Eduardo Paes has promised games unlike any other and, from what was shown at the closing of London, his journey towards delivering that promise is well underway.

Notably absent from the evening’s festivities was the Queen regent, Elizabeth II, who instead opted to offer her own congratulations to the athletes of the Commonwealth, and remained resting in her summer home at Balmoral. She was represented at the ceremonies by Prince Harry and newly appointed Duchess Kate Middleton.

Praise for the unbridled quality of the London 2012 games has been heaped on its organizers, and rightly so – the games of the thirtieth Olympiad were the first to embrace the world of open technology and social media, and have set major precedent for what an Olympic games should look like in the 21st century. Congratulations to all involved, straight from the ‘Buzz!