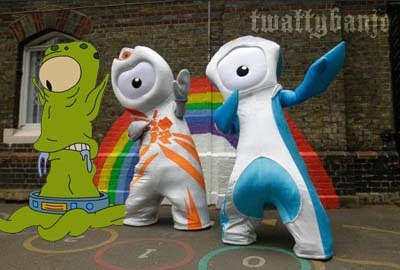 Today London’s 2012 Olympic committee unveiled what may very well be the worst mascots in the history of the games. This comes after they introduced a rather shitty logo that sort of resembles Lisa Simpson on her knees? Yet again, The Simpson have seemed to inspire the London 2012 designers as you can see in the photo above (is that Kang or Kodos?). Furthermore, the dick like creatures also love the Souljah boy dance. Keep ‘cranking that’ Wenlock and Mandeville (official names of these creatures) and don’t forget to superman that hoe.

These things make our mascots look awesome. Hell even the Pedo bear who was mistaken for a Vancouver 2010 mascot (he is actually a cartoon bear used to mock pedophiles) would have been a better choice for London.

Remember when London dissed our Olympics.  Well the tables have turned I suppose. On that note, good luck marketing these things.