With the Olympics just over two weeks away, our coverage begins with a look at Team Canada’s UBC contingent.

Welcome to Vancity Buzz’s official coverage of the 2012 Summer Olympics to be held in beautiful London, England! Over the next few weeks, we will be reporting the major events and following Team Canada all the way to the gold! We’ll also specifically focus on the Vancouverites and British Columbians in the games, and report with the latest – don’t forget to check back every week to follow your favourite athletes.

Today marks the beginning of the introduction to the athletes that will be taking their talent across the pond to compete for gold on the world’s biggest stage. We’ll start by taking a look at those that have graduated or are still completing their education at the beautiful University of British Columbia – and there are a solid number! 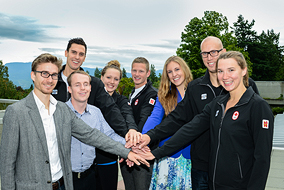 The largest group of athletes heading to London out of UBC are the swimmers – with eight representatives from the UBC swim team making the trip. The most famed among them are alumni Brent Hayden and Scott Dickens, both having competed in the 2004 games in Athens. UBC alum Donovan Tildesley is a favourite to medal again in 2012, having earned five medals at the Sydney, Athens, and Beijing summer paralympic games.

The remaining five swimmers are all current students, with Tommy Gossland being the exception – the CIS male swimmer of the year just finished his fifth and final year. The others – Tera Van Beilen, Martha McCabe, Savannah King, and Heather Maclean are all hopefuls to do well for the great white north in the pool come late July.

The other UBC 2012 Olympians can be found over a smattering of events, with the majority participating in track and field. Both alumnus Curtis Moss and Liz Gleadle (see her interview with Vancity Buzz HERE) will be taking their skills to the javelin pitch with hopes of landing big throws in the final round. Alumni Mike Mason and Inaki Gomez are both seeking success in high jump and racewalking, respectively.

Finally, alumni Mike Leigh and Luke Ramsay hope to sail their way to the podium in the 470 class race, while active students Toby Ng (badminton) and Denise Ramsden (road cycling) will test their UBC mettle in their respective competitions. UBC even has some international representation as well, with Laser class Mexican sailor Ricardo Montemayor boating for Mexico during the London games.

Look for all of our homegrown UBC talent to outperform the competition in this year’s games – let’s all get behind them and cheer them to victory!

Got any awesome Olympic news you want covered? Tweet it @cassarek