Based on the video below, it would appear that the BCO “Canuck” coaches have challenged the local volleyball “Bruins” to a game that aims to raise awareness for a rare form of cancer. The McNamara sisters are national competitors that continue to represent Canada across the globe in beach volleyball competitions. Though shorter than many others in their sport, the 5’9″ duo have bumped any doubt that their here to to do anything but win.

Huzar and Webb will take on the recently signed UCLA (Bruins) Sand Volleyball twins to raise money and awareness for Myeloma, which is a malignant tumour located in bone marrow. This form of cancer, like all others, can use as much help from public awareness as possible.

Megan and Nicole McNamara are two of the best beach volleyball players to ever come out of Delta, and have since become somewhat of a celebrated name at Kits Beach. The Kits Beach courts are considered to be some of the best competitive grounds in the world for beach volleyball, and these two have proven they can take on any challenges.

The two were crowned champions of last year’s Clearly Open Pro Beach Volleyball Tournament, and will be defending their title this coming weekend. 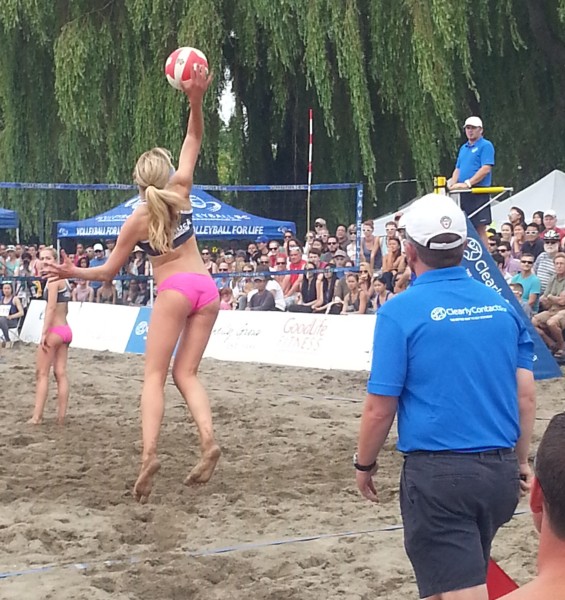 Players from as far as Hawaii will compete in this major beach volleyball tournament that has a total purse of $15,000. First place of both men’s and women’s teams will earn $3,300.

The volleyball community at Kits Beach continues to draw competitors and spectators from all over the world. This year, the Clearly Open tournament will attract over 20,000 spectators to the event that furthers the attention Kits Beach gets as being one of the hot spots to visit during the summer months.

Be sure to check out this highly anticipated Battle of the Sexes event on tonight as it’s had as much trash talking than John Mcenroe vs. Billie Jean King.