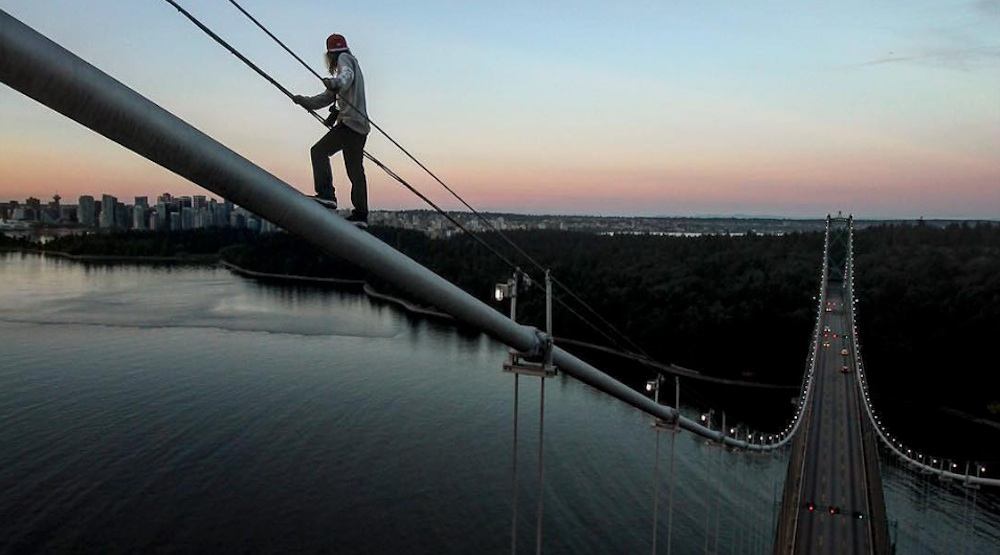 Soon visitors won’t just be able to look at Lions Gate Bridge, they’ll be able to climb it.

A notice of intent has been published by the provincial government, which manages the bridge, to partner with BC-based Legendworthy Quest Inc. to operate guided climbs of the iconic Vancouver bridge.

The tours would take climbers on the maintenance ladders inside the towers to reach the top of bridge tower where there is a platform for unobstructed views of the region.

The company’s initial contract will last for two years.

The provincial government says Legendworthy is “uniquely qualified and has the very specialized expertise” for bringing the public to the top of the bridge. It has also designed and developed adequate safety support systems and emergency response protocols for the attraction.

“Legendworthy has provided all details of the processes and procedures required to safely and effectively operate an adventure tourism business specific to the Lions Gate Bridge, including but not limited to the design of engineered plans, endorsement of required waivers, securities, safety plans, construction plans, and other risk mitigation strategies,” reads the notice.

Other potential operators with the same qualifications and expertise to run the attraction have until March 17 to express their own interest.

The BC Ministry of Transportation was not able to immediately provide a comment to Daily Hive on the proposed attraction.

Bridge climbing experiences in other cities

A number of major urban bridges around the world offer similar bridge climbing experiences, and the most well-known one is the Sydney Harbour Bridge, which is 3,770 feet long and 440 feet high. The experience began in 1998, and in 2013 it recorded its three millionth climb.

Similar bridge climbing experiences are also offered on Brisbane’s Story Bridge and the Auckland Bridge, where there is also bungee jumping. In Japan, climb experiences on the Akashi Kaikayo Bridge, the world’s longest suspension bridge, include tours of the structure’s hidden technologies and history.

And several years ago, a climbing experience was proposed for the Golden Gate Bridge in San Francisco, but it was rejected over concerns it would interfere with the extensive maintenance the bridge requires.

Hands up if you’d rather be doing this today! 🖐🏻 #bridgeclimb #ilovesydney #seeaustralia

Can you imagine watching the sunrise over the harbour on Valentine’s Day? Today, 8 lucky Climbers had their first date on the Sydney Harbour Bridge. Hard date to top off, isn’t it? #valentinesday #bridgeclimb #ilovesydney #seeaustralia

Have you worn one of our famous BridgeClimb Suits? Our suits are not only super comfy, they are specially designed to reduce the visual impact on the Bridge, and minimise traffic distraction. Now that’s one smart and stylish piece of clothing.

Summer is almost upon us, which means it can get pretty bright up here on the Bridge – but don’t worry, we’ll give you a BridgeClimb cap to protect you from the sun, and it’s yours to keep after your Climb! #bridgeclimb #ilovesydney #seeaustralia

Strike a pose! Lee from South Korea reached the summit with her best friend – who would you love to climb with? #bridgeclimb #ilovesydney #seeaustralia