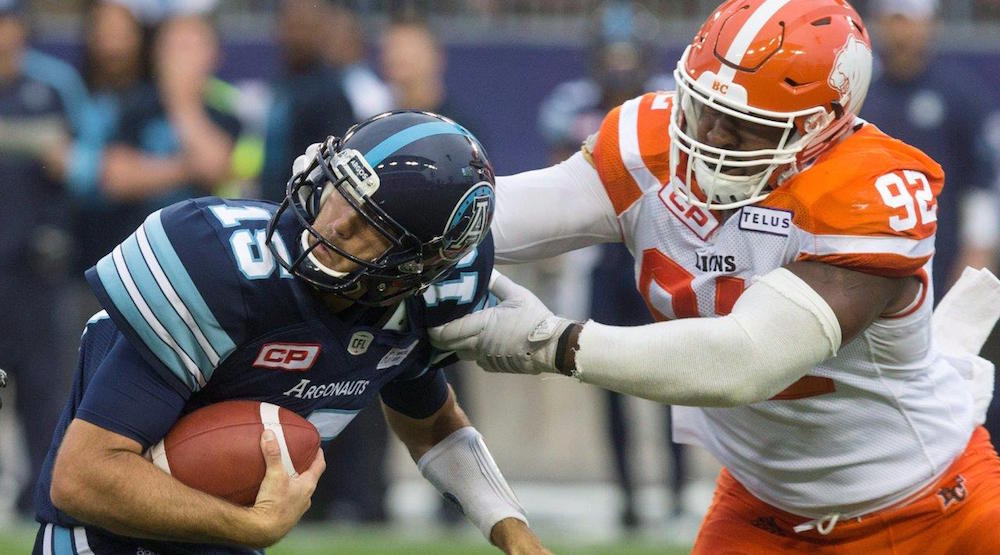 They say the best offence is a good defence.

That rings true for the BC Lions after a 28-15 win over the Toronto Argonauts on Friday.

And that's the ball game! 🏈
Big WIN in Toronto!
Lions start their road trip with a 28-15 victory over the @TorontoArgos 💪🏽#WeAreTheLions pic.twitter.com/2uyt4TJjcp

The Lions defence was coming up big all game, holding off the Argos offence and even forcing a few turnovers that turned into points for BC.

It was the first win of the season for the Lions, who seemed determine to rebound from their crushing loss in Week 1.

Here’s what you need to know from Friday’s game.

The biggest takeaway after this game (as well as the last one) is that this Lions defence is strong – even without Adam Bighill.

Tonight the Argos had 22 rushing yards. That’s it.

For some context, Lions’ running back Jeremiah Johnson’s longest run was 21 yards, just one yard short of what the Argos ran the whole night.

With the run game not working for the Argos, the pressure was really on QB Ricky Ray, and the Lions defence knew it.

#Argos QB Ricky Ray feels the heat and throws an interception to #Lions defensive back Ronnie Yell. All defence so far. #CFLGameDay pic.twitter.com/mDx6zfHAS2

Heading into the fourth quarter, the Argos had just nine points. That was key, because the Lions offence didn’t really get going until the later stages of the game.

One thing the Lions need to work on as the season continues is protecting their quarterback.

After allowing five sacks in their home opener, they allowed another four tonight.

That’s not enough protection for Jonathan Jennings, who excels at finding the open man when he has a bit of time to work with.

The Lions running game has been quite strong this season. If the offensive line can buy Jennings time to get more passes off like that one, this team will not be fun to play against.

With Swayze Waters still not 100%, it was rookie kicker Ty Long playing his second CFL game.

His first was a roller coaster, making a few good kicks early but having one blocked and missing a key convert in the final minute.

This time around, he went perfect on his field goals, including a new career-high of 47 yards.

The issue this time came on his punts. He had a few illegal punts that resulted in good field position for the Argos, and they took advantage on one of those drives to score their only touchdown of the game.

Despite the inconsistencies, Long can clearly kick. If he’s able to improve his accuracy, he’ll be a huge asset moving forward.

All in all, it was a solid road effort for the Lions, the first of three straight away from the Den. The win moves the Lions to 1-1 on the season.

The next game kicks off on Thursday, July 6th, in Montreal.