Linnie von Sky‘s foray into the world of children’s story book writing and publishing took wing in the curiousest of places: On a trio of air sickness bags aboard a flight from Toronto to Edmonton.

But the German-born Vancouver transplant’s profound connection to the power stories have in young people’s lives stretches back to her own girlhood full of books. With her second independently published children’s story book now on sale, and a third in the works, von Sky is opening the minds and hearts of children (and grown ups) with her thoughtful stories about big issues facing kids today.

I sat down with von Sky to talk about her unusual journey to becoming an author, a Vancouverite, and how she is able to connect with her young readers.

As von Sky puts it, the road to writing and publishing her own children’s stories “was anything but straightforward.” Over the last decade, von Sky meandered down a variety of career paths, from marketing to fashion, without finding creative satisfaction. An opportunity to work for the Canadian Obesity Network introduced von Sky to the ongoing national conversation surrounding weight bias––a subject she’d circle back to in her latest book, “Pom Pom, a Flightless Bully Tale.”

But it was the jackrabbits spied outside the family home in Edmonton that sparked a story to take shape. In November 2011, von Sky was aboard an Air Canada flight when a story about jackrabbits Giacomo and Jacqueline “just came tumbling out” of her thoughts, and, with nowhere else to write, ended up scrawled on a set of barf bags. (Air Canada’s blog has the full story.)

It was a lark for von Sky and her husband to pull out the barf bags so she could share the tale of immigrant jackrabbits with friends, but when a real-life immigration issue froze her husband’s ability to work in Canada, the pair turned to the story and embarked on a project to make it into a book. What resulted was “Our Canadian Love Story,” which von Sky calls “a little happy project” that kepts her “spiritually up” during the tough time. 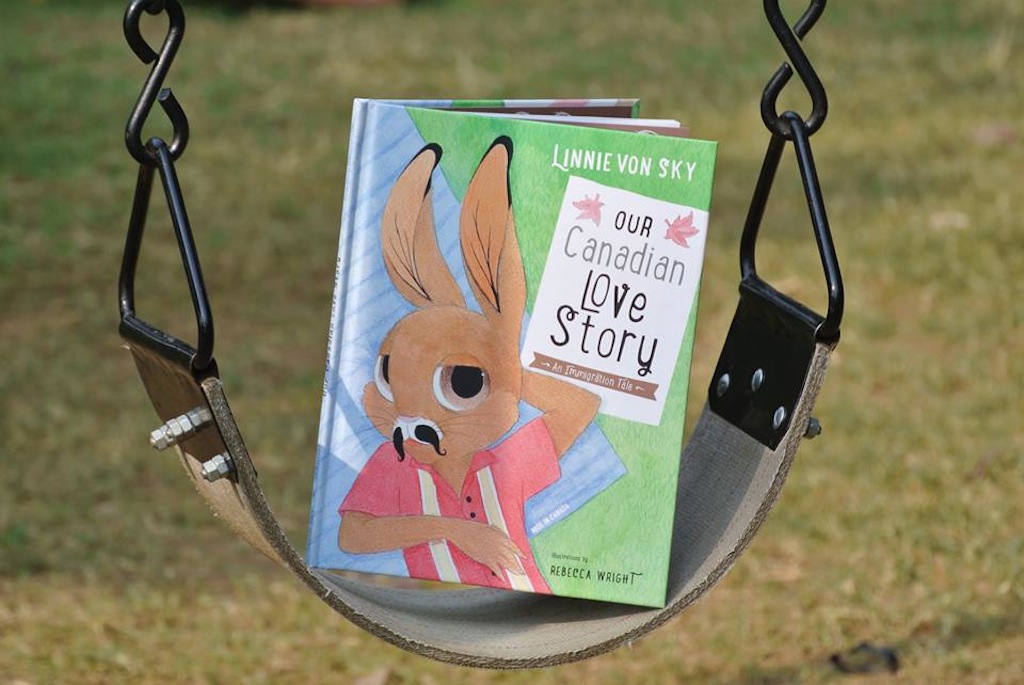 The story book “became our love project,” elaborates von Sky. They turned to crowdfunding to support the publication, and found a 19-year-old budding artist, Rebecca Bender, to serve as the illustrator. Never one to shy from creative solutions, von Sky paid Bender in art school tuition, with “A Canadian Love Story,” and “Pom Pom” funding two years of Bender’s education at Vancouver’s Langara College.

Von Sky says it’s taken her to get to the second book for the reality of her new role as a publisher and author. “I don’t think i’ve caught up to this happening just yet,” she explains. “I think I needed to do book number two to prove to myself this isn’t going to go away when I pinch myself,” laughs the author, backed by her infectious wide smile.

Launching a book writing and publishing career in this era of rampant technology may seem on the surface like a fool’s errand, but as von Sky pushes a spotless just-printed copy of “Pom Pom” my way across the table, it quickly becomes clear how timeless her endeavour truly is. Von Sky grins and laughs knowingly as she urges me to take the book into my hands.

Without giving it a second thought, I did what I’d done to books since my own childhood, and smoothed my hand across the cover in a gratifying swipe.

“It’s the most natural thing in the world to pick something up and touch it,” says von Sky. “They love the way this feels,” she adds of her readers and her books. 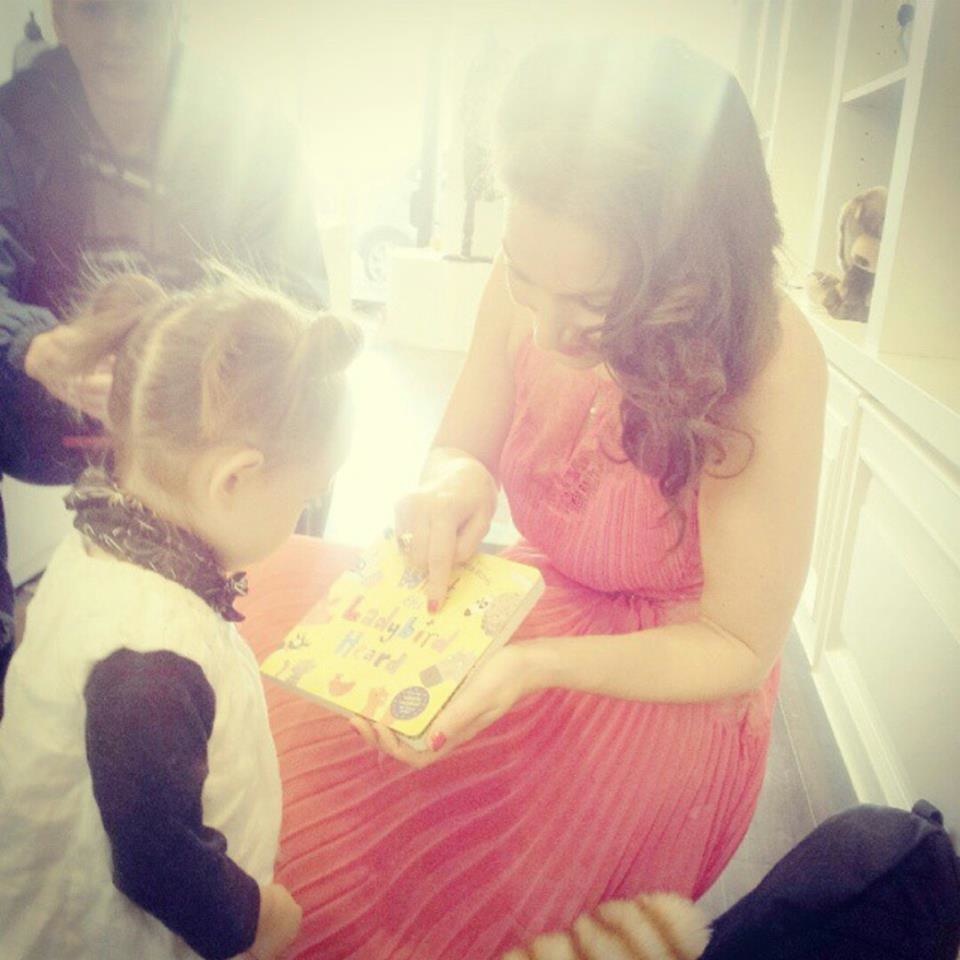 Von Sky and a young reader (Photo via Facebook)

Von Sky says she has no interest in publishing ebooks, and would only do an app if it somehow enhanced the stories she’s written in book form. “When it comes to bedtime, few people take the iPad to bed. It’s still about books. Let’s dim the light, let’s cozy up together, let’s read a book,” she says of the value of tangible books.

The author says she spent her own girlhood cozied up to books in the room she shared with her sisters. Von Sky recalls her parents taking her to readings by famous European children’s story authors, like Astrid Lindgren of “Pippi Longstocking,” fame, and von Sky serving as the inquisitive front-row kid hoisting her hand up in an attempt to learn more from the writers who inspired her so much.

Now the tables have turned, and it’s von Sky fielding questions from her youngest fans. “I learn a lot about my books by reading them with lots of children,” says Von Sky.

Though she and her husband are still hoping to welcome children of their own into their lives, von Sky has no shortage of the special insight it takes to connect with her young audience.

“I think in pictures,” says Von Sky of her writing process. “I think quite vividly, I get the world that the kids live in, and think I always try to keep that very alive for myself. And I think that children are just so much more intelligent than we give them credit for.”

Rather than pander to children by using baby language, von Sky writes using “big” words that she may cheekily define in a footnote. “I write in pictures and emotions,” elaborates von Sky of her writing style. “The kids get that, it resonates with them. It just takes a really playful person with an incredible love for words,” she says of her gift for writing for children.

Emotions govern both the text von Sky produces, as well as functions as a means for her readers to relate to her stories. Immigration, bullying, and, in her next book, depression, are major issues that others may shy away from broaching with kids.

“Even the biggest topics are really just about simple concepts,” says von Sky. “[Children] understand love, kindness, respect, missing somebody, what it means to be hurt, what happiness means.” 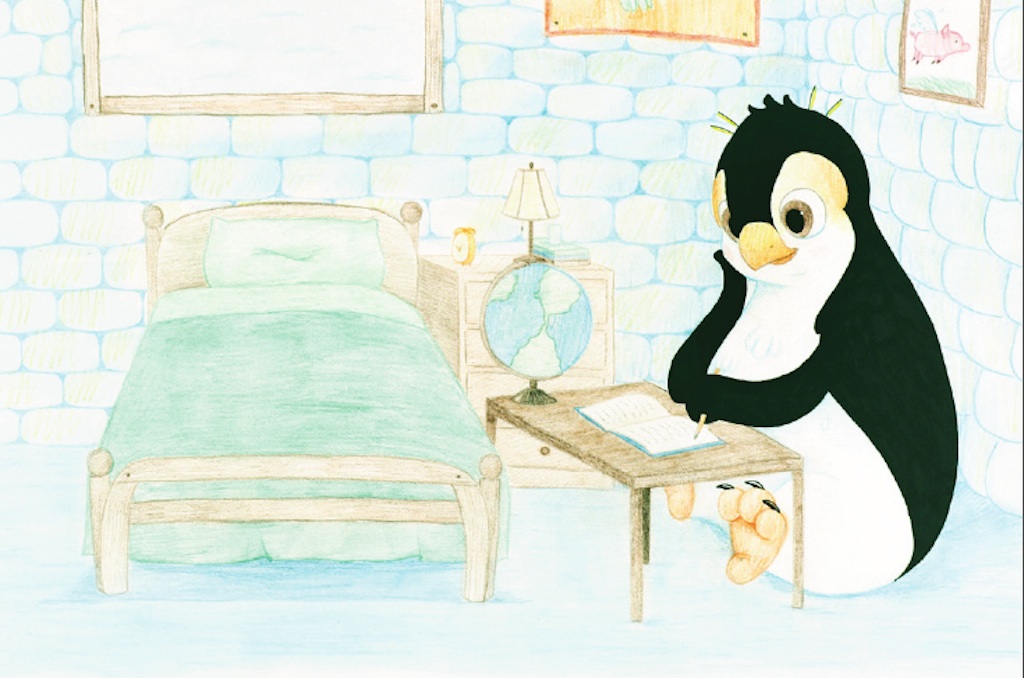 From “Pom Pom, a Flightless Bully Tale” (Photo via Facebook)

Bullying, which is the core issue in “Pom Pom,” is a topic that touches children–the bullied and the bullier–and adults alike.

“When you talk about bullying you have to talk about how much it hurts. Kids understand that,” says von Sky, who hopes her stories ignite conversations. Of “Pom Pom,” von Sky remarks: “I think it’s an encouragement to talk about emotions. What triggers certain actions, what makes somebody want to hurt someone else. Are they hurting? I’m not the psychiatrist, I don’t have the psychology background for this, but, on a very human scale, this kind of conversation needs to be happening.”

For von Sky, whose protagonist in “Pom Pom” is picked on because of his size, the pain of bullying in the story echoes the passion she first tapped into working with the Canadian Obesity Network. “Weight bullying happens to be the one thing I’m extremely allergic to,” affirms von Sky.

Another big conversation von Sky refuses to shy away from is mental health, which is the subject of her next book, “Sadly the Owl.” The autobiographical tale of a boots-wearing, line-dancing owl who suffers from depression is part of what von Sky hopes is a shift towards Canadians “actually recognizing that [depression is] more than just a ‘sad day.'” 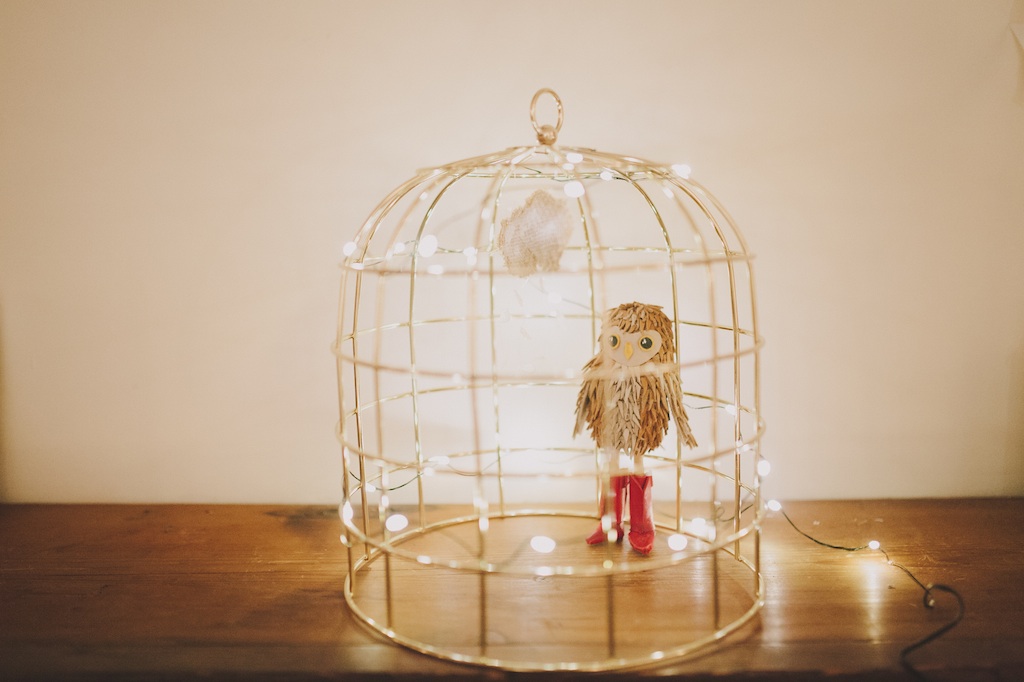 Sadly the Owl via Indiegogo

Von Sky is currently turning once again to crowdfunding to get “Sadly” made. The author–who supplements her income by working in boutiques and teaching pilates at the lululemon headquarters–is fiercely proud of being an independent publisher. “There’s this perceived notion that because it’s self-published it’s got to be lesser quality, but that’s just not the case with my books,” von Sky explains. Her books are produced on 100-pound paper (instead of the usual 80), with matte laminate scratch-proof covers, and they’re printed in Canada.

Being her own publisher also means serving as her own distributor. Every copy of her nearly 2,000 books sold to date have been “hustled” into local stores by von Sky and her husband. Vancouverites will find her books in places like Edible Canada and Redfish Kids; a full list of Canadian stockists is posted online.

It’s tremendous work, but for von Sky, it’s part of her living her Canadian dream. Von Sky says she is finally putting her roots down in Vancouver–the city she and her husband “crushed on” sufficiently upon arrival they can’t imagine living anywhere else.

“It’s a bit of a pioneer city still, in so many ways,” von Sky muses about Vancouver. “There’s so much stuff popping up right and left. I’ve met so many people who are creating. It’s a place for dreamers. Yes, it’s tough–we pay high rents, and we have all that stuff going against us that people say we have going against us, but if you can muddle through all that, you have it made. If you can wrap this little city around your finger, then it’s an awesome place to live.”

So it’s in Vancouver where von Sky has created a home with a welcome mat out for nearby friends, relatives, and future kids, and where she finally feels able to take on her depression and forge ahead creating books for Canadian children to cherish, like “Sadly the Owl,” which she’s working to make a reality.

“I think part of my happiness now is knowing i felt the complete opposite of [how Sadly feels]. It’s a fine balance. If I can share this story through the form of children’s books, then I think that’s something I’m almost gifting myself.”

You’ll find von Sky’s books on sale in select stores, and you can support “Sadly the Owl” on Indiegogo.