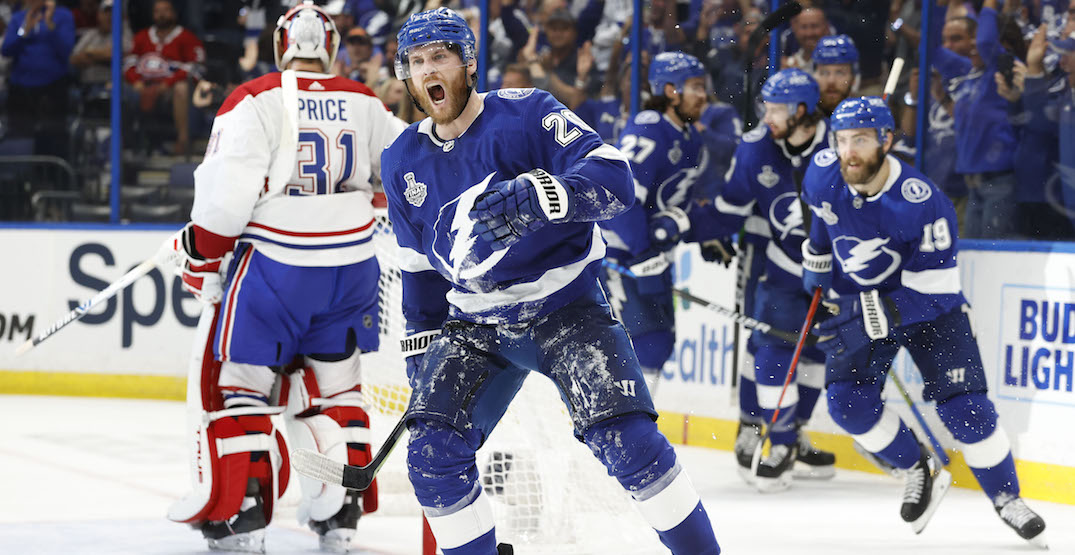 Despite a much better performance in Game 2, the Montreal Canadiens are down 2-0 in the Stanley Cup Final after a 3-1 loss to the Tampa Bay Lightning at Amalie Arena on Wednesday.

Blake Coleman delivered an absolute dagger to the Canadiens right as the second period was about to expire to break a 1-1 tie.

It was a cruel end to a second period in which the Habs outshot the Lightning 16-7. Anthony Cirelli had opened the scoring for Tampa Bay just about seven minutes into the middle frame, but Nick Suzuki responded on a power play for Montreal less than four minutes later.

Ondrej Palat all but sealed the deal late, making it 3-1 with just over four minutes to go in the third period.

Cirelli’s fifth goal of the playoffs went through several bodies and beat a screened Carey Price to give the Lightning a 1-0 lead.

A few minutes later, Montreal got a power play after a dangerous hit on Artturi Lehkonen by Mikhail Sergachev.

On the power play, Suzuki rolled a backhander towards the net from the point that somehow got through Andrei Vasilevskiy for his team-leading sixth goal of the playoffs.

Lehkonen went to the Canadiens dressing room after the hit and missed the rest of the second period, but returned for the third.

Late in the third, Joel Edmundson tried to play the puck to Petry behind the Habs net, but Palat beat Petry to the puck and then beat a surprised Price.

Lightning forward Alex Killorn did not play on Wednesday after suffering a lower-body injury blocking a shot from Petry in Game 1. Joel Armia drew back into the lineup for Jake Evans for the Canadiens.

After the Lightning held serve on home ice, the Canadiens will now need to do the same. In order to do that, they’re going to need to find a way to get some more pucks by Vasilevskiy. They may have played much better in Game 2, outshooting Tampa Bay 43-23, but they once again scored only one goal. The Habs had several odd-man rushes early in the game but didn’t convert on any of them.

Game 3 goes Friday at 8 pm ET/5 pm PT. It will be the first Stanley Cup Final game ever played at Bell Centre.

The Canadiens announced earlier on Wednesday that they have not received approval from Quebec health officials to increase capacity from 3,500 for their home games.