Traffic jams, head lice, and Nickelback – these are all things people hate, but many Americans find them more palatable than Donald Trump.

As many as 54% of Americans have a higher opinion of head lice than Republican presidential hopeful Trump, according to Public Policy Polling. Around 39% prefer oft-joked-about B.C. band Nickelback to Trump, and another 47% would rather be stuck in traffic than have Trump as president. 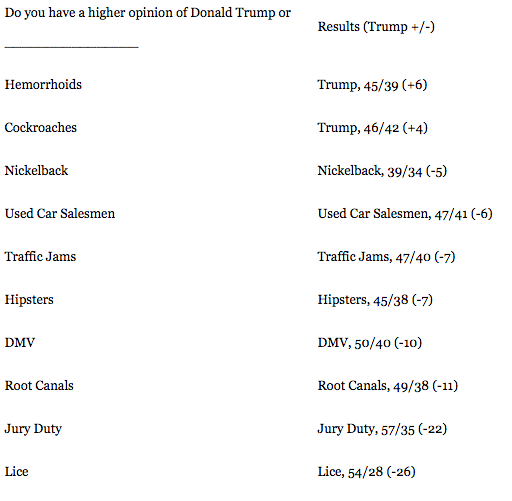 Beyond that, 65% of Trump supporters believe President Obama is a Muslim, 59% believe he wasn’t born in the United States, and another 27% think vaccines cause Autism. Thankfully, of those polled, only 34% of voters have a favourable opinion of Trump, compared to 61% who have an unfavourable opinion.

If you’re among those Americans who dislike Trump and you’re fearful of his potential presidency, there’s hope for you yet: a recently launched dating site plans to pair you with a Canadian single should your worst fears become a reality in November.