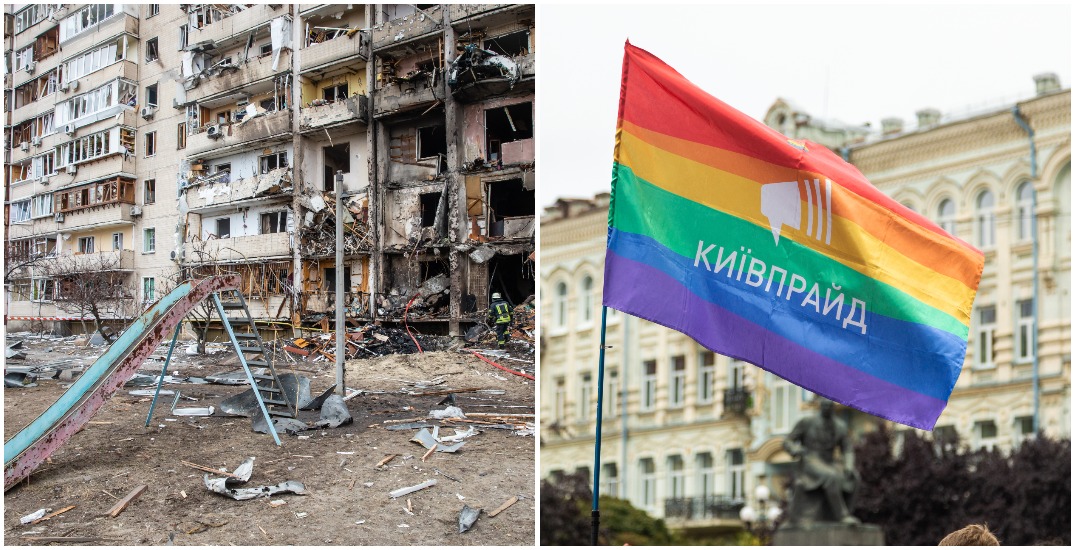 Since the Russian Federation’s military action in the country, more than four million Ukrainians have crossed borders into neighbouring countries. However, leaving the country as an LGBTQ+ person comes with increased challenges. These difficulties are especially pronounced for queer men and trans individuals.

One problem for trans women trying to leave Ukraine is that their government ID may still identify them as male, meaning they are subject to the martial law that prohibits men between the ages of 18 and 60 from leaving the country.

Edward Reese, project assistant at KyivPride explains the process of changing documentation for trans individuals in a video below, stating that it can be a “long process, but not impossible.”

LGBTQ+ people can serve in the military and are doing so courageously, in spite of the fact that the Russians are believed to have had a plan to target them specifically, along with journalists, religious, and ethnic minority groups.

To better understand what LGBTQ+ individuals are facing right now in Ukraine, I connected with Canadian-Ukrainian Andrew Kushnir and several people on the front lines.

Kushnir, who has a decade of strong ties to LGBTQ+ activists in Ukraine, shared some of the struggles the community are up against: “Trans folks undergoing hormone replacement therapy need their meds. Queer people who may have homophobic or transphobic families require other networks of support. Trans women with so-called mismatching papers need help evacuating besieged cities.”

“Ukraine’s LGBTQ+ rights movement is still emergent,” Kushnir said, “But it’s worth pointing out that in 2021, just before this invasion, Ukrainians were close to passing a national anti-hate crime bill, Bill 5488. In the same year, Russians passed a law banning marriage equality and trans adoption. These are countries moving in opposite directions.”

The hardships facing LGBTQ+ people in Ukraine are compounded by hate crimes within the country. While activists have made great strides towards equality, acts of violence are still being perpetrated against LGBTQ+ individuals.

Last week, leading human rights activist Olena Shevchenko was assaulted on the streets of Lviv while doing humanitarian aid work. She was approached by a man who attacked her with a chemical spray. The chair of the LGBTQ+ rights group, Insight, shared on Facebook that she suffered burns to her face, hands, and eyes from what’s believed was a targeted homophobic attack.

Stories from the front lines

Alexandra Semenova, a 37-year-old lesbian living in Zhytomyr works as a Project Coordinator for LGBTQ+ organization You Are Not Alone. She shared, “A few days ago, rockets arrived again in the Zhytomyr region. There is constant noise of air sirens. I am always anxious now, I don’t sleep, and often have to take sedatives.”

You Are Not Alone provides assistance in the form of financial help, food, medicine, and other daily essentials. They also help with evacuation. Since the invasion, the organization has helped more than 800 LGBTQ+ people and their families. “There is no time to rest,” says Semenova.

One woman the organization has helped is Marta Kostenko. 37-year-old Kostenko is currently pregnant and taking care of two children after her partner, Olga was forced to flee to Poland in order to find work. “It is very difficult for us to accept the separation,” she tells me.

When her city of Kyiv was bombed last month, Kostenko took the kids and hid in a basement for one week. “For the sake of the children I try not to panic and be calm. But they can feel it.”

I also spoke with Tymur Levchuk, the 27-year-old co-founder of the LGBTQ+ organization, Fulcrum UA, who left his hometown of Kyiv one week before the war broke out. Levchuk is currently on the front lines in Lviv coordinating financial support for victims, visiting shelters, and delivering medications. “Yesterday, Lviv was bombed, now we are dealing with the first victims of the shelling.”

Levchuk has lost his home and half of his family are in America now. “I hope someday I will have the opportunity to see them again because now I can’t cross the border by law.”

When talking about serving in the military, he told me, “We do not have recognition of civil-partnerships [in Ukraine], so LGBTQ+ military partners cannot receive state compensation if their partners die or are injured.”

What can we do to help?

Kushnir set up the We Support LGBTQ Ukraine Fund, which is currently supporting six Ukrainian NGOs and meeting the urgent needs of their LGBTQ+ community. Funds raised are directly impacting those on the ground.

Donations can be made here.