For the first time in 30 years, the world-infamous Les Ballets Trockadero de Monte Carlo will grace the stage in Vancouver. Presented by Toronto’s Show One Productions, this show promises pointy-shoed playfulness from an all-male troupe of gifted professional dancers.

Humourous and technically impressive, this one-of-a-kind show is not to be missed by Vancouver dance lovers. Reinterpreting a repertoire of classic ballets like Swan Lake and Paquita, the extremely able-bodied men of Les Trocks defy tradition and physics by creating stage magic on their point shoes.

Vancity Buzz caught up with Svetlana Dvoretsky, President and Executive Producer of Show One Productions. “You will never see another show like it,” Svetlana promises. “Even as they make you laugh – they take your breath away.” Read the full interview with Svetlana below. 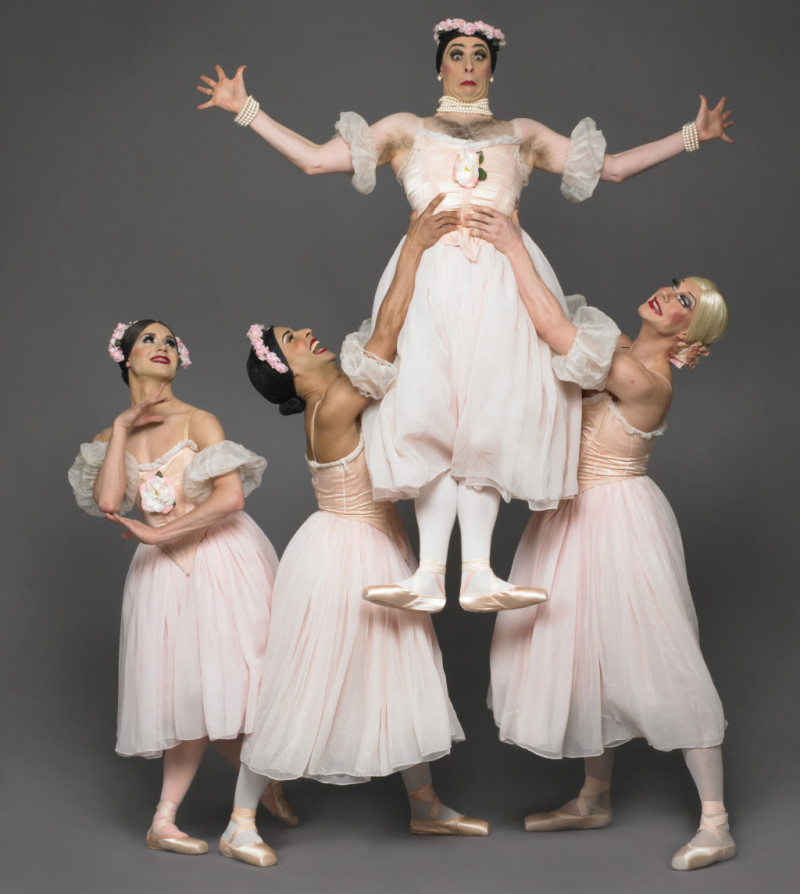 1985 was the last time Les Trocks played in Vancouver, so it’s a good time to bring them back!

Yes, absolutely! They are now celebrating their 40th anniversary. It’s a very rare case for a company to stick around for so long.

Tell me about the dancers.

They’re based in New York, but the company consists of dancers from all over the world. It’s not easy to find dancers that would fit into the company. There are a few key people that have been with the company for many years, but they bring in new blood almost every year.

What has been a constant with this show over the decades?

The quality of the dancing. Honestly and truly, I’ve presented many different companies, and I’ve never ever seen any company that has a class every single day, except the days that they’re traveling. Every single day, and the day of the show, they have a class, and as we all know, it’s very difficult for men to be on pointy shoes. It’s different because of their weight and body structure, etc. It’s very hard work that they take very seriously, but on stage it seems to be so effortless. You don’t put much thought into it unless you know what it takes.

In the years you’ve been presenting Les Trocks, how has the show evolved?

Certain dances they show anywhere they go. Swan Lake and a few others are their signatures, but other choreographies they evolve a lot. They have so much on their repertoire right now, it’s tremendous. They are one of the busiest companies in the world. Certain markets they return to every single year, so they are constantly coming up with new ideas.

You produce a diverse variety of shows with your company. What’s been the impact of this non-traditional success story on your company?

Since Les Trocks’ last show here in 1985, a whole lot has changed in North American society around LGBT acceptance, gender roles, etc. Can you comment on the significance of this show’s return to Vancouver in 2015?

Often the show is being perceived as ”the gay show”. The company, and myself, is kind of against that statement. The only gayness in the show is that basically all the members of the cast are gay. However, they don’t qualify themselves as a show just for gay people. They absolutely appeal to the arts audience, and you’ll often find kids in the audience as well, because of the comic element.

You’re absolutely right, though: the perception and openness in society on that subject is much more accepting. I think with this particular show, they had success 30 years ago and they’re going to have great success in 2015.

What has been the response so far in Vancouver?

When I was first consulting with people, they were telling me that dance is very difficult in Vancouver. It’s one of the most challenging art forms in terms of sales. Honestly, I got my feet cold for a moment, but decided to go with it. To be honest with you though, we’ve seen a fantastic response. I’m very very happy with how things are going in Vancouver.

What do you hope the Vancouver audience discovers with this show?

I think the combination of serious, hard work behind what we know about ballet, and that it doesn’t have to be so serious. Yes you can laugh with it, yes you can cry with it, yes you can feel relaxed about it without giving in on the quality. I also think that the element of tolerance for some people who maybe still have some problems with accepting is also very important.

Before I presented them for the first time I was quite nervous. To be honest, I thought it would be a very difficult project to handle. I thought it would be super high maintenance, and I was prepared for that. What I discovered was completely the opposite. They’re the most organized, pleasurable, and easy and lovely people to work with. They’re most responsive to all the needs that we have as presenters, very flexible, and very hard working. If they had more time and dates for Canada, I would be happy to be presenting them all the time.

Since the show is about bending the rules, what rules do you break in your line of work?

I think as private theatre entrepreneurs, basically our lives consist of bending the rules. We have to adjust, be resourceful and creative. Sometimes things work against all odds, and sometimes when you think that it’s clear as water, they just don’t. But we do it because we love to do it. Sometimes it’s tough, but it’s a lot of pleasure and adrenaline, and that’s what we kind of live for.