A few short weeks ago, Vancity Buzz had the opportunity to review Leo Frincu’s autobiography Choosing Freedom. Recently, we sat down with Frincu to discuss his motivation for writing the autobiography, how long it took, and even his thoughts on one of his star pupils, current UFC Women’s Bantamweight Champion Ronda Rousey as she embarks on this latest season of the Ultimate Fighter, and a rematch with Miesha Tate.

Frincu started by getting into where he got the idea to start on Choosing Freedom, and other factors that cemented his decision.

“People were telling me “You’ve got a great story” and at one point I said to myself “that’s my heritage and I want to pass it on to my children,”  Frincu began. “I’d just had a daughter, and just wanted her to relive some of my memories and just put it to paper. As with every goal I set for myself, I hate just saying it, so I just started writing, and once I thought I had enough material, I contacted an editor to help me edit it. It wasn’t just one reason, but several. Another is that some people are going through difficulties with their parents, and they’re not aware of it. As soon as I realized my relationship with my mother was affecting my life as it is now, that was another reason.  I just wanted to build and create some awareness around this issue too. We all have difficulties with parents, but we just think that it doesn’t affect us. But it affects us more than we could ever imagine.

From an immigrant standpoint as well, it was coming into this country where I had nothing and being successful, and just building myself up from nothing. It was a combination of reasons that pushed me to write this book.”

With about 35 years worth of material and life events to choose from, the book did not come together right away. It took a lot of personal reflection, and eventually, setting weekly goals and deadlines to meet.

“It took about 2 years,” Frincu reflected.  “It was simple for me because I knew everything – There wasn’t any additional research. I’d been writing for a few years but just big blocks of writing where I didn’t do anything with it. One day, I just decided to move forward and put it into a book. [The Editor] helped me with the structure it, and that’s where it came together. It only took a few months after that.”

Frincu’s emotional issues with his upbringing, and especially his mother are well documented in the book. At one point, Frincu describes the emotional detachment from his mother as such that he once sat a video message replaying a part where his mother expresses love because it was such an unusual thing to hear from her.

As suspected during the review, Frincu also admitted there was no Ghostwriter throughout the process, which is why none was credited. The words, he says, were completely his own, and it was done on purpose.

“It’s my style,”  Frincu stated. “It’s the way that I do things, or see things. I needed that. It had to be me, and needed to be me. Someone might interpret something differently, so I needed to keep my style and my tone. I don’t feel anybody can express you properly except you.” 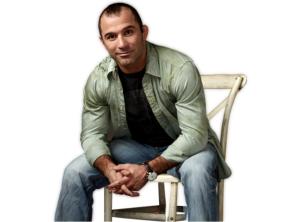 While the book has been in out in North America for nearly half the year, it has not yet been made available in his birth country Romania. It is currently being translated, and will be available eventually. That is when a contentious issue may arise — How will his mother handle what was written about her? When asked this very question, Frincu admitted that his family had not read the book, though he had thought long and hard about when it could come a reality and had made a fallback plan.

“I do have somebody translating the book into Romanian and I said to my dad “Listen, I’ll give you the book,”  started Frincu. “I want you to read it and let you make the decision of to pass it on to my mother. Since I don’t live with her, I don’t feel like I have the right to make him do it. I don’t want to make him “pay” for what I said. I’m healed. I don’t resent her or want anything from her. I just want her, and them to be happy. So I gave my dad the choice as to whether or not to give it to her.  But I had an extended conversation last time she was here and I explained to her what went into this book and it was hard. They’re old school, you know. They don’t really realize what’s going on or what they’re doing to their children.”

“Being honest about how I felt about my mother (was the hardest part to write,)” said Frincu, without hesitation.“I was questioning if I should write it, and I would ask my wife if I should write about it. She said it was my choice, but she said my readers would connect with me more if I was honest. To be honest, I have nothing to be ashamed of and I’m completely happy that I did it.”

As a former world champion wrestler, Frincu had the opportunity to appear on some major stages for Romania had he stayed. Medals at the Sydney, Athens and even Beijing Olympics could easily have been within his grasp. However, at a time where he could have been on a podium in celebration, he was sleeping on his friends’ couches, or struggling to save up for a car, or go to school in his new life in the United States. Frincu admitted he doesn’t look back on that time negatively, or ever reflect on what many would consider opportunities lost.

“I have absolutely no regrets. Not even one. I lived my life and I did what I wanted to do, and it’s one of the things I’m trying to tell people through this book,” admitted Frincu. “You have one life and we’re all going to be old and look back. The worst feeling is one of resentment, and regretting not doing something. If you allow someone to hold you back, it’s one of the worst things. I couldn’t let anybody hold me back. I look back knowing I made the best decision I could have at the time.  I never felt sorry for myself on those hard times, nor do I feel sorry now.”

Frincu closed the interview by discussing his trainee and friend Ronda Rousey, whom he has been with since before she decided to become a Mixed Martial Artist. In fact, he was one of the figureheads that pushed Rousey and her mother Dr. AnnMaria Demars (who Frincu referred to as a “Tough Cookie”) to make a career of the sport. Frincu was undying in his praise for when asked about her accomplishments to date.

“She’s an unbelievable athlete, just unbelievable. She’s like the Michael Jordan of MMA,” said Frincu emphatically. “She has all the qualities you look for. I trained her once as she was starting out in MMA, and I called the person that referred her to me and said “Listen, she is going to be the best athlete you’re ever going to have” and that was a couple years ago and look where she is now. Having been through the journey that I have, I know what it takes to achieve greatness, or push yourself to your highest potential. I saw that in her, in her work ethic. We sat down at lunch with her and her mother convincing her to let Ronda start her MMA career. We said to give her one year to prove that if she couldn’t make a career out of MMA, she could go back to school.  A year later, she was one of the best there.”

In addition to his day to day obligations, Frincu is currently making public appearances and has plans to continue with speaking engagements in the future, including an appearance on King 5 in Seattle on August 5th.  You can follow him on Twitter @LeoFrincu

Choosing Freedom is now available in all major bookstores, or online.

Written by Matt Paligaru. Connect with Matt on Twitter @paliontology