The last 48 hours has had a large amount of newsworthy story lines that have next to nothing to do with a actual game. There is the news of Manny Malhotra being placed on IR. plans for Sochi, and realignment to name a few. The story line I am enjoying the most has been the recent battle taking place in Ontario.

News broke yesterday that the Ottawa Senators front office had contacted it’s fans, dubbed the Sens Army, and asked them to NOT sell their tickets to the upcoming game versus the Toronto Maple Leafs to Leafs fans. Obviously us Leafs fans, Leafsnation, took note of this and from what I have heard, the demand for the tickets to the game on Saturday March 2nd has skyrocketed.

Today, in response to the move by the Senators, the Maple Leafs front office issued a Valentine’s Day card to their 260,000 followers on Twitter. Here is the card: 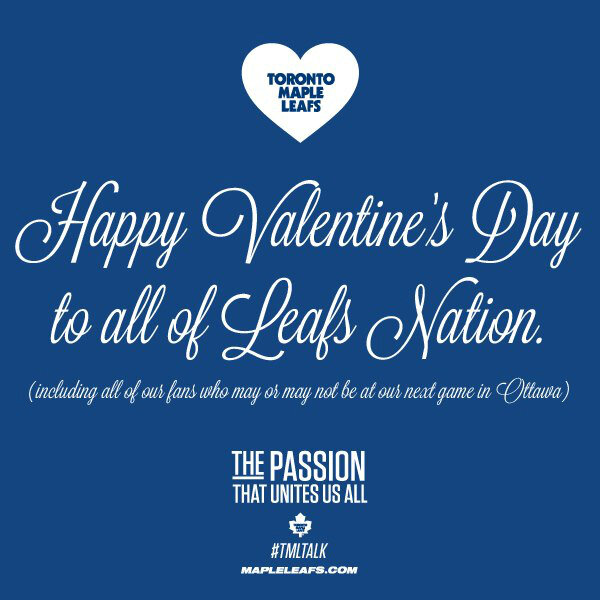 The battle of Ontario has always had intensity to it. Years of meeting in the playoffs, back when my Leafs made the playoffs. Sharing the same province. Now with this fiasco, along with the fact the two teams are currently tied in the Eastern Conference, this matchup on Hockey Night in Canada is sure to be a spirited one. I for one know my eyes will scan the crowd from time to time to see how many LEafsnation members made it into ScotiaBank Place for this game.