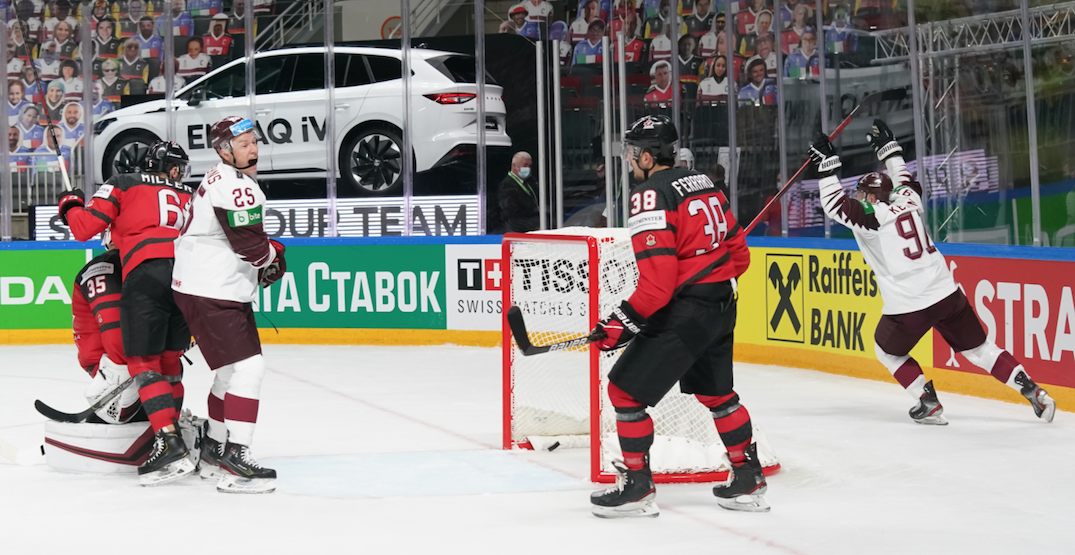 History was made on the opening day of the 2021 IIHF World Hockey Championships in Riga, as Latvia pulled off a shocking upset over Canada.

The 2-0 win by Latvia, a country of under two million people, was their first-ever victory against Canada at this tournament.

Canada outshot Latvia 38-17, but were unable to beat goaltender Matiss Kivlenieks, who picked up the shutout.

While Canada didn’t send a powerhouse team to the World Championships this year, this still qualifies as a sizeable upset. Team Canada is mostly comprised of NHL players, with team captain Adam Henrique joined by other veterans like Connor Brown, Colin Miller, and Troy Stecher in their lineup.

Latvia, meanwhile, is an emerging hockey nation with less than a handful of recognizable names for North American hockey fans. Canada will look to bounce back with a victory over USA on their next game on Sunday.

“We knew [Latvia] was a good team,” said head coach Gerard Gallant. “We arrived here three days ago and had three good practices to get ready for our first game, and I thought it was a very competitive game. They are a strong team and they worked hard, and they deserved to win tonight.

“Unfortunately, we did not get many bounces, but there was no underestimating them. We know [Latvia head coach] Bob Hartley from Canada and the way he coaches, and his team played a great game tonight.

“I am happy with our team’s performance as well. This was our first game we have played together as a group. We had no exhibition games, and I thought we played well given the circumstances. With a little bit of luck, we could have got a few bounces and it might have been a different game, but overall we will continue to get better as the tournament goes on.”