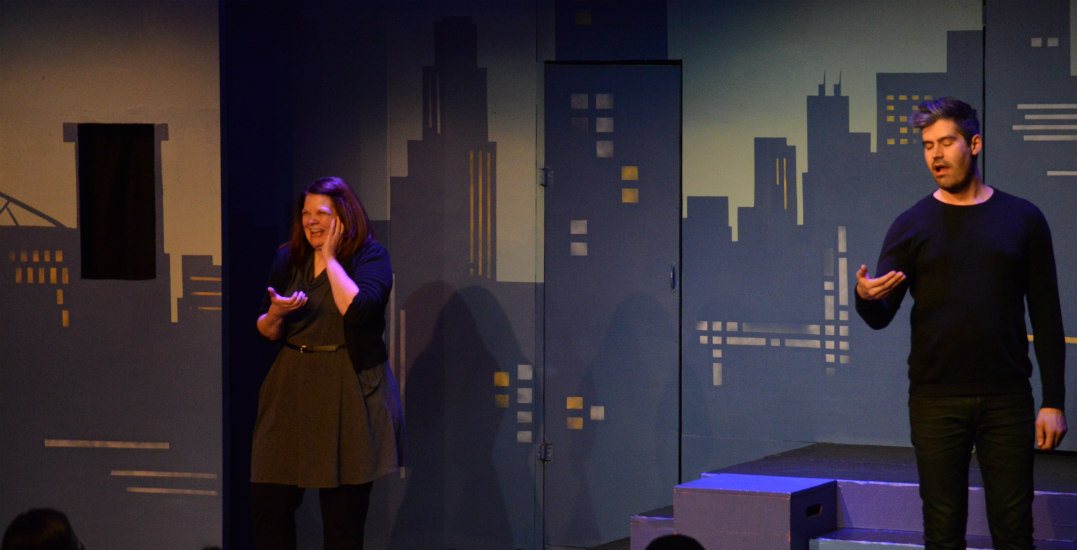 Having trouble sleeping? Tired of Netflix and chill? Seen every dumb YouTube clip out there a million times? Well, you could stay in and whine about the heat. Or, you could turn a hot night into an even hotter, funnier, night out.

Vancouver TheatreSports (VTS) is running three late night shows to keep you laughing until the sun comes up. Located on Granville Island, The Improv Centre is an easy transit ride, and an even easier night out. There are plenty of places open to grab a bite or beverage before (and sometimes after) the show.

If you bring your ticket confirmation or stub to Vancouver Fish Co. or Dockside Restaurant before or after a show, you’ll get 15% off. The Neil McCrae Bar & Lounge inside The Improv Centre has you covered for drinks, and an Instagram worthy, marina view. With tickets starting as low as $10.75 each.

Because we want you to be happy right through to fall, we’re giving away a voucher for two admissions to each of the VTSL late night shows at The Improv Centre. Enter below for your chance to win!

But first, here’s a look at the hilarious shows you could be seeing soon.

Dating horror stories come to life in OK Tinder where VTS pokes fun at Vancouver’s notorious dating scene with the help of audience suggestions. Their improvisers ‘match up’ to turn the good, the bad, and the ludicrous of Vancouver’s dating scene into 60 minutes of side-splitting laughter. You can catch the show on Wednesdays at 9:15 pm. Anyone aged 17 or 18 must be accompanied by an adult.

In this winner-takes-all contest, you won’t see a ‘Peruvian necktie’ or a ‘rubber guard’ but you will see opponents face off in a fierce competition of wits for who can win the most laughs. In Mixed Improv Arts (MIA), two improv directors go head-to-head as they put a team of improvisers through a set of gruelling and hilarious improv formats. As in MMA matches, Mixed Improv Arts promises a no-holds-barred battle to the finish. This show is on every Thursday at 9:15 pm. Anyone aged 17 or 18 must be accompanied by an adult.

WTF: What the Fun!

With the aid of audience suggestions WTF – What the Fun! takes its inspiration from the quirky stories found in the weekly news and online. Part of the show features ‘re-interpretations’ of fun times had by audience members by adding their own humorous and unpredictable spin to their Instagram photos or written anecdotes. You can see the show on Fridays and Saturdays at 11:15 pm. Attendees aged 17 or 18 must be accompanied by an adult.

Enter for your chance to win a voucher for two admissions to each of the VTSL late night shows at The Improv Centre; OK Tinder – Swipe Right Comedy, MIA: Mixed Improv Arts, and WTF: What the Fun!

To enter for your chance to win a voucher for two admissions to each of the VTSL late night shows at The Improv Centre, do the following;

Contest entries will be accepted from the time and date of publishing until 11:59 pm on August 6, 2018. One winner will be chosen at random and contacted through the platform they used to enter.