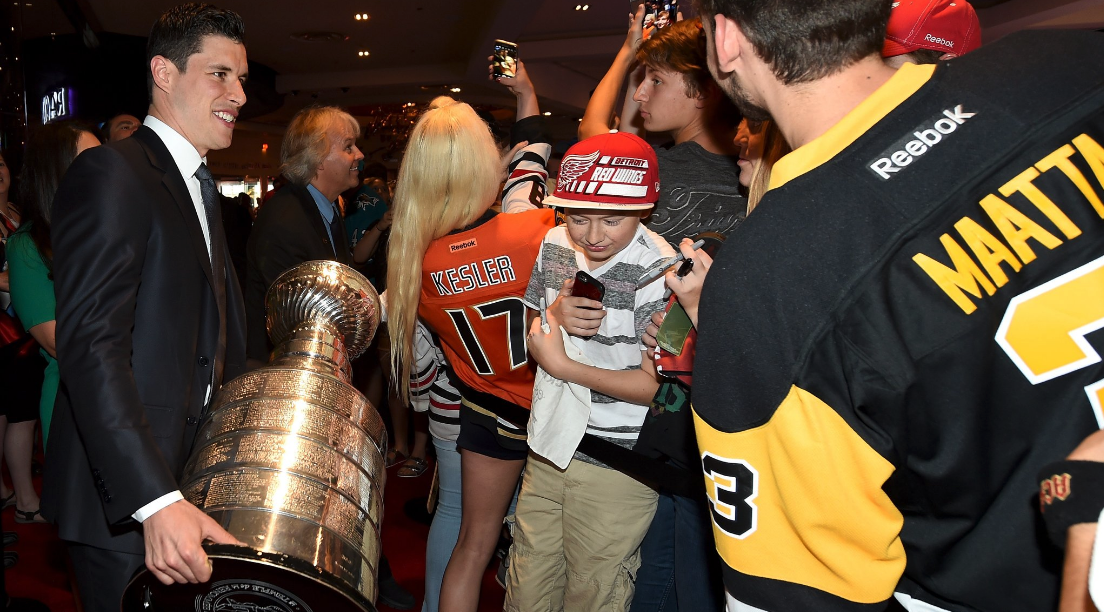 When the NHL looks for glitz and glamour, they turn to Las Vegas, for the annual NHL Awards.

This year’s awards show came on the same day that the NHL made it official, Sin City is getting an expansion team. The handful of locals I asked about the news said pretty much the same thing. They’re not hockey fans, but they’re excited to get a major pro sports team.

Weather all week was in the 45 degrees Celsius range. If the Las Vegas team ever makes a long playoff run, I hope ice guru Dan Craig has a trick up his sleeve to keep the playing surface presentable. But if there’s a town that can pull it off, it’s Vegas.

On the heels of the Pepsi Hoist the Cup promotion at SUBWAY Restaurants, Pepsi and SUBWAY sent me to Las Vegas to cover the event. Jealous? You should be.

Here’s how it all went down…

NHL players, by and large, are not great showmen off the ice. Hockey players are programmed to be unselfish and focus on team accomplishments, rather than personal glory.

But for the red carpet entrance, they might as well have been actors at the Academy Awards. One-by-one, players and celebrities filtered into the Hard Rock Hotel & Casino, flanked by NHL fans from all over the league. It was impressive to see fans of teams from far and wide. This wasn’t just a case of a few fans from nearby Los Angeles jumping on the freeway.

The red carpet is a free event, so anyone vacationing on Vegas can pop by and see the best of the best up close.

What struck me about the Awards Show was just how accessible everyone was. I used the bathroom shortly before the show started – yes, I’m starting with a bathroom story – and walking in front of me was Patrick Kane, winner of the Hart, Lindsay, and Art Ross trophies.

Ok, bathroom break is over, let’s start the show.

Will Arnett was this year’s host and I thought he did a capable job. It’s always good when the host is also a hockey fan and that was obvious to see.

As a fan of the Canucks, it was bound to be a disappointing night. With no players nominated for any awards, I wasn’t expecting to see much blue and green. That changed immediately.

Jacob Tremblay – child actor from Vancouver and noted Canucks fan – presented the first award for, appropriately enough, the Calder Trophy. Tremblay came out wearing a Canucks jersey and stole the show by telling Sidney Crosby: “Come find me at the after party, I’ll let you take a selfie with me.”

And in case you thought he was just joking…

Later on, we got a surprise appearance from Henrik Sedin. Henrik won the King Clancy Award, which is given annually to the player who best exemplifies leadership qualities on and off the ice and who has made a significant humanitarian contribution to his community. The Clancy is an award for which the league doesn’t have nominees, just a winner. Henrik followed in the footsteps of team president Trevor Linden, who won the award in 1997 while with the Canucks.

Henrik then made everyone in Vancouver proud by thanking multiple Canucks captains (Trevor Linden, Markus Naslund, Stan Smyl, Orland Kurtenbach). He didn’t mention Mark Messier, who was standing right there.

Any party with the Stanley Cup in attendance is a good party.

Any party where you can see the ‘Old Spice Guy’ (aka Isaiah Mustafa) and Bob McKenzie within about 30 seconds of each other is a good party too.