A Langley woman says if it weren’t for a sympathetic BC Ferries employee, who she now considers her guardian angel, her family wouldn’t have made it to the island to say good bye to a loved one.

Glenda Johnston told CKNW her husband’s brother, John, suffered a massive stroke, and they were asked to get to Campbell River as soon as possible.

The thing is, it was the B.C. day long weekend, and the earliest ferries were full.

She says she then made a desperate call.

“I phoned that 1-800 number and that angelic voice at the end of the line, Danica, just assured me right away that she was going to get us there, and said Glenda if you can get to Tsawwassen by 2:45pm, I can get you on that 3:15pm sailing.”

Johnston says they made it to the hospital just hours before the 59-year-old sadly passed away.

She posted the ordeal on Facebook, praising the “valiant effort of Danica” she writes “that beautiful, understanding voice at the end of the phone line.”

She says she is part of a co-op, and it’s her first summer working for BC Ferries.

Danica Marrs says she is overwhelmed by the positive feedback.

“I read through it, I monitored it over the next couple of hours, it just kind of started to explode, and seeing all of the comments, it was really great to see, it was really nice. It was definitely heartwarming and nice to see how just the simplest action on my part really made a big difference for them.”

While Johnston and Marrs haven’t had a chance to meet in person, Marrs says she would give the Langley woman a hug right back, and calls the response “magical.” 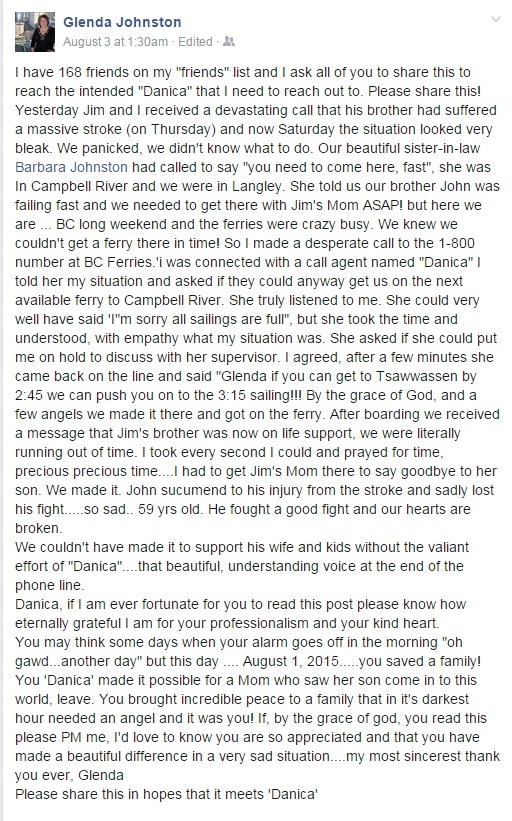