From crazy hair to crazy wear, it is a widely known fact that anything Lady Gaga does, she does big. Her upcoming “Born This Way Ball” tour, set to begin in Vancouver at Rogers Arena on January 11 and 12, is no exception, except one minor detail.

The media mastermind, who has long advocated for the gay, lesbian, bisexual and transgendered community, is planning to introduce her unprecedented Born Brave Bus through her “Born This Way Foundation,”  to everyone but Canadians. PR associate for the foundation, Anna Miller, says the reason the bus is not stopping in Canada is “simply based on logistics.” While American concert goers will have free access to professional, private or group chats about mental health, depression and bullying, Canadian fans will have to settle for just the performance. 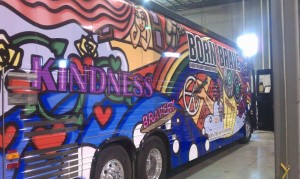 Several organizations will assist in counseling on the colorful Born Brave Bus, including the leading national nonprofit LGBT organization, Campus Pride. Musical entertainment by DJ White Shadow and Lady Starlight, as well as plenty of food and games, will be provided in hopes of keeping the discussion of bullying lighthearted.

A young bisexual student from France, who goes by the name Mac le mort, says that Gaga’s message is one of bravery. “She is a role model because she has totally changed our lives not just through her music, but by her big heart, and has helped so many teenagers gain confidence, which is very important in order to live.”

There is currently no indication how American concert-goers will gain admission to the bus and receive therapy. As for Canadians, hopefully the lack of invitation to the tailgate party won’t cause a “bad romance” between fans and Mother Monster.