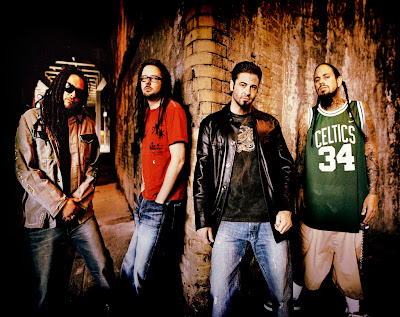 Tonight Korn will be in town playing at the Queen Elizabeth Theatre of all places. When one thinks rock concert, that probably is not one of the venues that jumps out at you. However, I have never been to a rock concert at the QE Theatre so I’ll leave my judgment of the venue there. Personally, I prefer the Commodore, but who doesn’t? Tickets are still available for tonight’s show, the link for tickets is in our Spring Concert Guide.

Korn was one of the many bands lumped in with the whole rap-rock genre of the late 90’s and early 2000’s, yes the very same genre that gave us Fred Durst and Limp Bizkit (although Break Stuff is still something I play when I feel like…breaking stuff). However, Korn’s music always had a bit more substance to it and with hits like, Freak on a Leash and Alone I Break (a personal favourite) prove that. Their videos, along with Linkin Park’s were also among the coolest at the time. So if you aren’t doing anything this Monday night, check out Korn, a great band that gets dissed for the wrong reasons.