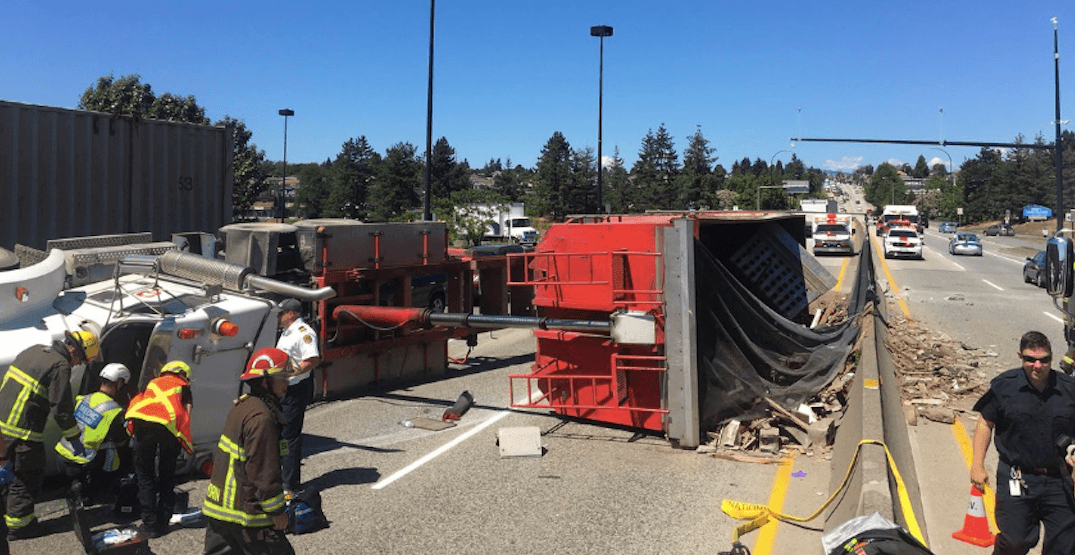 A single northbound lane on the bridge has now reopened to traffic, but crews are warning commuters that traffic is still extremely heavy.

Commuters who regularly use the Knight Street Bridge to travel between Vancouver and Richmond will have to find a different route this afternoon, as the bridge is currently closed to traffic in both directions following a semi-truck rollover.

Vancouver Fire Rescue tweeted that one person had been extricated from the vehicle, but that the bridge is shut down to traffic to give hazardous material crews (hazmat) teams a chance to respond and check for any dangerous spilled fluids.

Single patient has been extricated from rolled over truck by #vfrsheavyrescue Technicians and @BC_EHS Knight Bridge closed in both directions by @VancouverPD and #richmond @rcmpgrcpolice #vfrs Hazmat Team responding for spilled fluids #vanhazmat pic.twitter.com/mLiKOsqZv2

There’s no word on this point on exactly what caused the crash, or when the bridge will be reopened to traffic, but hazmat crews have now arrived on scene.

It’s been a generally messy afternoon in the South Vancouver neighbourhood, as prior to the truck rollover, fire crews had already been called to a blaze at Knight Street and 63 Avenue resulting in lane closures.

The fire was put out, but traffic was already affected, as crews responded to the unrelated rollover incident, first closing the southbound lanes, before eventually closing the bridge completely.