Over this past week, curlers across the country were rockin’ their respective houses. The house being the “target” on the ice of a curling match.

Everyone knows of curling, right?  Whether you love it or not, you can’t help but be impressed by the accuracy these athletes have as they hurl stones down an ice shouting at one another. The vigorous sweeping has nothing to do with having an obsession for a clean playing surface as it actually helps position the stones to their targeted area. Ideally you’re aiming to hit the button (or bullseye) but that’s if there are no other stones in the way.

The BC Scotties were hosted by the Golden Ears Winter Club and presented by Best Western, and teams from across the province competed from January 21 to 25.

Most notable teams competing in Maple Ridge this year were composed of some of best rinks in the country. Teams Scott (Maple Ridge), Knezevic (Prince George), Wark (Victoria), Lewis (Royal City) and Van Osch (Nanaimo) were all made up of seasoned players looking to move on to the Tournament of Hearts in Moose Jaw, Saskatchewan, starting on February 14.

After some of the best Curling this province has seen in a long time, Patti Knezevic and her squad (Kristen Fewster, Jen Rusnell and Rhonda Camozzi) of Prince George curlers prevailed. It took a few extra ends to beat Team Wark (Skip: Sarah Wark, with Simone Brosseau, Michelle Allen and Rachelle Kallechy) 5-3. Team Knezevic earned their spot in the finals after an undefeated run in the qualifying rounds. 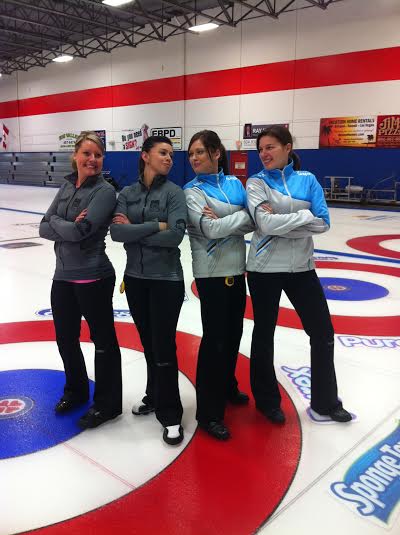 The road to the B.C. finals truly began when Team Scott beat their “rivals” from last year, Team Van Osch. With a new rink, Team Scott swept up a win (9-7 in event C) against the team that knocked them out of finals last year. Team Van Osch’s rink with skip Kesa Van Osch, Kalia Van Osch, Trysta Vandale and Kelsey Steiger hurried hard and played well, but Team Scott hammered home a win to move on.

With Van Osch knocked out, Team Scott then went on to beat Team Lewis, before losing to Team Wark. With Wark beating Team Scott, Knezevic was a slightly relieved as Patti stated, “I was just happy to see a Kelly not on the ice.” Both Kelly Scott and Kelley Law appeared to have had Knezevic’s number in previous competitions.

It should be noted that 2014 Olympic gold medalist and 11-time Hearts winner, Team Jones had also won the Manitoba provincials. There’s no Kelly or Kelley on Team Jones, so Team Knezevic should have no trouble bringing home the gold.