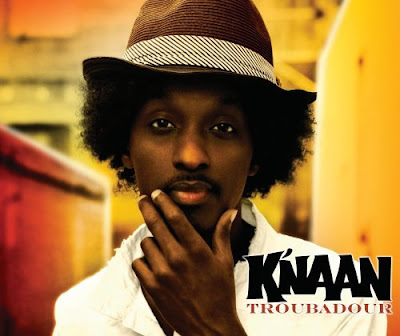 Written by: Justin
Cancel a concert for charity and witness some of the most upset fans in concert history. I heard about K’NAAN’s no show Tuesday night at the Peace Day event,  hosted by SFU student club iVOW to raise money for girls’ education in Ghana, and I logically went searching for an explanation and information about refunds. I discovered an unexpected story.
The cancellation appears to have stemmed from a failure to fulfill K’NAAN’s rider, a type of agreement that sets out what will be paid and provided for an artist to perform. According to a blog (link www.samreynolds.ca) by Sam F. Reynolds, organizers came short $5,000 of an unknown fee to be paid to K’NAAN. When this was announced to concert-goers in Burnaby, fans were visibly upset and many expressed their opinions to K’NAAN the next day via Twitter. Many felt that the artist should have overlooked the fee because the concert was being held for charity.
I also noticed an alarming image floating around on Twitter of what looked like a direct message from K’NAAN himself. I met up with Reynolds himself to confirm the authenticity of the message and the reason behind it. Reynolds apparently posted some information about a previous affair of K’NAAN’s, and it looks like it upset the artist himself. Reynolds then provided me with the official email Twitter sends to its users when they receive a direct message. 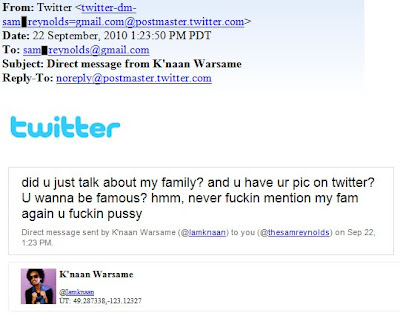 I tried to contact K’NAAN’s publicist at Press Here Publicity but did not receive a response in any form. K’NAAN’s official website also did not provide any statement or information and Press Here’s website locks all recent press releases. However, Reynolds also told me he is a writer for The Peak and that a story including a copy of K’NAAN’s rider agreement and deeper details will be available in The Peak’s next edition Monday.
However, there is good news for concert-goers and fans. I spoke with Omar Nada, an organizer with iVOW, and discovered that refunds will be available for a limited time. From September 22 to October 6, those who wish to receive a refund can look up details on iVOW’s website, www.ivisiononeworld.org.
VancityBuzz.com