After losing two games in a row against the Calgary Stampeders dating back to the 2012 playoffs, the BC Lions were finally able to beat the Stamps on Saturday night. They earned a 26-22 victory in an unspectacular but hard fought game, where the defences on both teams were the story in the second half.

The Lions jumped out to a quick start as Lulay completed a 40 yard catch and run to Andrew Harris for the first touchdown of the game. It was the first time the Lions found the endzone on their opening drive this season.

Calgary came back with a touchdown of their own, but on the ensuing kickoff, Lions returner Tim Brown came up with a spectacular 96 yard kickoff return for a touchdown, the first of his career.

At halftime the score was 21-16 for the Lions, but there wasn’t much scoring after that. It was all about the defences for both teams in the second half.

Solomon Elimimian and Adam Bighill led the way once again for the Lions as they both finished with 8 tackles on the night, leading the team. Bighill also recovered a fumble by Stampeders running back and New Westminster native John Cornish.

After Calgary turned the ball over on downs in the final minute thanks to some stellar defence by the Lions, the team was able to hang on for the 26-22 victory.

The Lions surprised all the 29,201 fans at BC Place on Saturday night as they donned new jet black uniforms. They tricked fans by warming up in their usual orange jerseys before coming out in their new jerseys. The new uniforms are completely black, with a orange paw on the helmet and shoulders, orange trim around the jersey numbers, and an orange stripe down the pants.

The uniforms were a hit with the fans as the new jerseys sold out at BC Place on Saturday night. 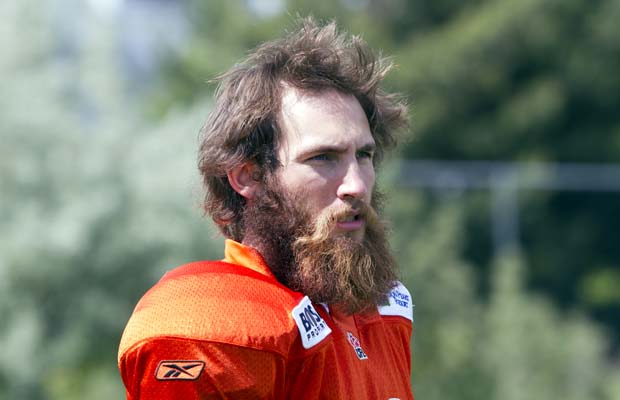 The Lions cut ties with 23 year old kicker Hugh O’Neill earlier in the week. The two sides were unable to come to an agreement on a contract extension. O’Neill, the man with the best beard in the CFL, will now leave all the kicking duties to Paul McCallum.

This has to be a bit of a disappointment for the Lions, who were hoping to groom O’Neill to take over from 43 year old McCallum. But who knows, maybe McCallum isn’t ready to retire anytime soon.