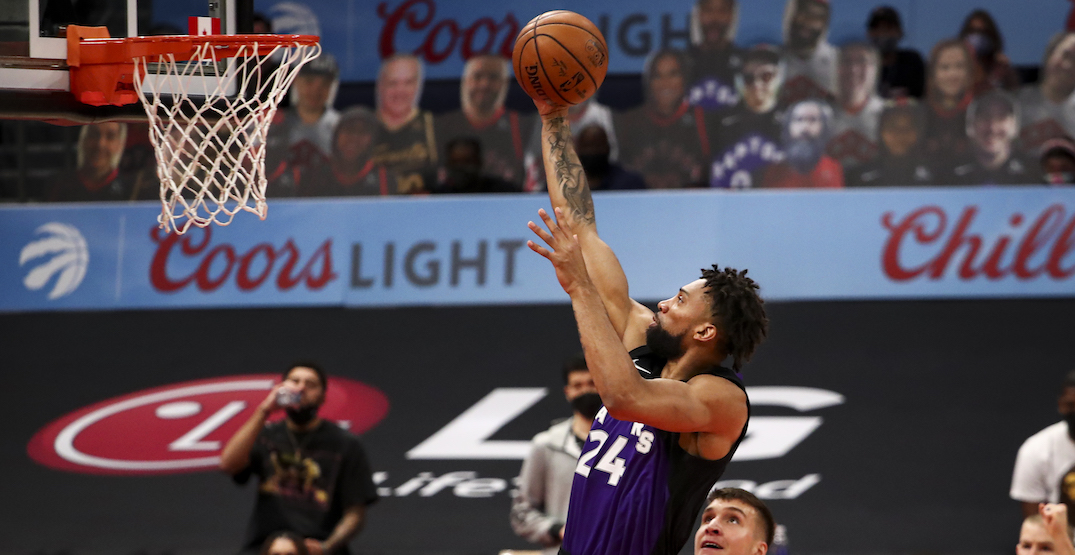 After a season that’s seen the Toronto Raptors run into just about every on-and-off court issue imaginable, recent centre signing Khem Birch has quickly brought stability to a position that’s been in desperate need of it.

In his first start for the Raptors on Wednesday night against the San Antonio Spurs, the Montreal native put up 14 points, one assist, and six rebounds. It’s not a glamorous stat-line by any means, but the Raptors don’t necessarily need glorious right now as they grind through a stretch just hoping to clinch a play-in spot as one of the Eastern Conference’s top 10 seeds. They currently sit in 11th place with a 22-34 record.

In a night where the Raptors were missing Kyle Lowry, Fred VanVleet and newly-crowned star Gary Trent Jr., Birch showed that he’s here to play, and offered up at least a glimpse of what competent centre play looks like.

San Antonio doesn’t have the powerhouse roster they once did, but they’re not nobodies, either. Led by former Raptor DeMar DeRozan, the Spurs are still at the very least a respectable NBA opponent in a deep Western Conference, with a 26-27 record.

As bad as they’ve looked this season, the Raptors have also had many stretches where they remind you exactly why they’re just two years removed from being a champion.

They might not be one piece away from being a contender again, but they’re closer than they might seem to being very good again. And Khem Birch just might be that dude to push them from the ‘unwatchable’ category to the ‘convince you they could pull off an upset in a playoff round or two’ category.

Who is Khem Birch?

Birch first found his way to the Raptors after being waived by the Orlando Magic on April 8. After parts of four seasons with the Magic, he found his way onto a new NBA roster for the first time in the regular season (he had a preseason stint with Miami to begin his career.)

How it has ended up sounds almost too perfect to be true: two Canadians running the centre position for the Toronto Raptors. Like fellow Raptors centre Chris Boucher, Birch grew up in Quebec for part of his childhood. Birch is listed at 6-foot-9, 233 pounds — the same height but 33 pounds heavier than Boucher.

Now 28  (again: so is Boucher), Birch is in his fourth NBA season… also like Boucher. Both went undrafted in the NBA, though their college careers do differ a little bit. Boucher spent two years at Oregon after a year at New Mexico Junior College, while Birch played a year at Pittsburgh before transferring to Pittsburgh for… two years. Maybe they really are just different versions of the same person.

Birch is an unrestricted free agent after this year, and essentially playing for his professional basketball future every time he touches the floor.

There’s been a million think-pieces written about offseason acquisition Aron Baynes’ inability to mesh with the Raptors lineup. Baynes has not been good virtually all season, and has made just seven of his 31 starts this season in the Raptors’ last 26 games.

If Baynes is back next season (he has a year remaining on his contract), it won’t be a performance-based roster spot, and it’s not a topic that needs much revisiting. It’s clear as day he’s been the weakest link just about every time he’s touched the floor this season.

In the advanced stat VORP (Value Over Replacement Player), Baynes is dead last among 22 Raptors players this season at -0.8. (For what it’s worth, Boucher is second on the team.)

Out of 523 players to play in the NBA this year, Baynes ranks 516th in VORP. He hasn’t played at all since Birch was available to suit up.

In an ideal, healthy lineup, four of the Raptors’ starting positions are pretty much set, with Lowry and VanVleet at guard, and OG Anunoby Pascal Siakam at forward.

And then there’s a hole at centre.

It’s just one player, but it’s 20% of the starting lineup and a recognizable difference whether it’s Baynes, or, well, not Baynes. A full-time starting role might be too much for either Boucher or Birch to handle, as it’s not something either has dealt with in their NBA career so far.

But for a team that’s clearly still missing the dominant front-court they once had in Serge Ibaka and Marc Gasol, a Birch-Boucher duo looks far more attractive than virtually any lineup involving Baynes.

It might be a bit of counting chickens before they hatch. But at least for now, the worst of the Raptors centre troubles appear to be behind them.