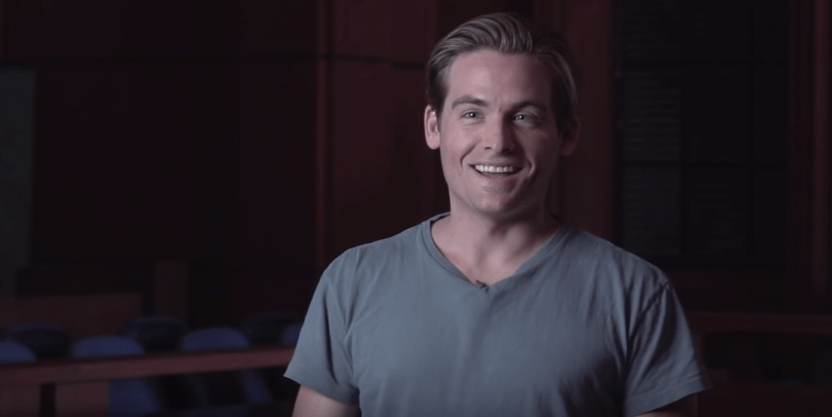 Kevin Zegers for Canada In A Day/YouTube

Whether it’s from his early starring role in Air Bud, or his role in Academy Award-nominated Transamerica, or perhaps it’s his Damian days on popular television show Gossip Girl, Zegers has definitely made his mark in Hollywood. The Los Angeles-based actor has recently joined the cast of Notorious, a new drama which begins on September 22 on CTV.

And while Zegers is living in the US, his heart still at home in Canada. He headed north recently to help launch Canada In A Day – a new film that will be comprised entirely of footage filmed by Canadians on one single day, September 10, 2016.

“I was super stoked on the idea,” he said, proudly wearing his Toronto Maple Leafs hat while chatting with Daily Hive. Zegers is very Canadian in his hospitable and friendly ways. Upon landing in Vancouver, he invited his fan to join him for a run on Twitter.

Vancouver! Tonight at 6pm let’s go for a run. Meet me in front of the Shangri-La Hotel and we’ll knock out a few miles.

And his tweets continued, as he called on Ryan Reynolds, Ryan Gosling, Ellen Page, and Seth Rogan to join his Canada in a Day campaign, since they are all also from our home and native land. His enthusiasm for Canada is clear, while speaking to Zegers, he said the first thing he does upon landing is hitting up a Tim Hortons.

“The second I get off the plane, I always get Tim Hortons. That’s crucial. There’s something about the taste of it,” Zegers said. And even though he lives in LA, he remains an avid hockey player, and still plays two days a week. “I love to go see hockey games. There’s a place called Kelsey’s in the town that I grew up in, I love to go there and watch hockey,” he said.

The Woodstock, Ontario, native said he loves his local Kelsey’s, and is often there with his friends when he’s back home. And for him, Canada In A Day would be there, among Canadians.

“[Canada] is more about the people than one thing that I would do. There’s really something different about the people, and that’s what I hope this Canada In A Day video will show. That as a people, we’re culturally different than any other country,” he said.

Canada In A Day is about Canadians, and as Canadians, you are invited to submit as much or as little footage during the 24-hour period on September 10. To help you choose what to film, you can answer the questions “What do you love about Canada?” and “What does Canada mean to you?” Once the film is ready, you will have until October 22 to submit the footage online.

Are you ready to film? #CanadaInADay starts at midnight tonight! pic.twitter.com/KfOHvjtaKt

Canada In A Day will be aired on CTV as part of Canada’s 150th anniversary of Confederation in 2017. We can’t wait to see what Zegers, and other Canadian celebrities, have in store for their footage.