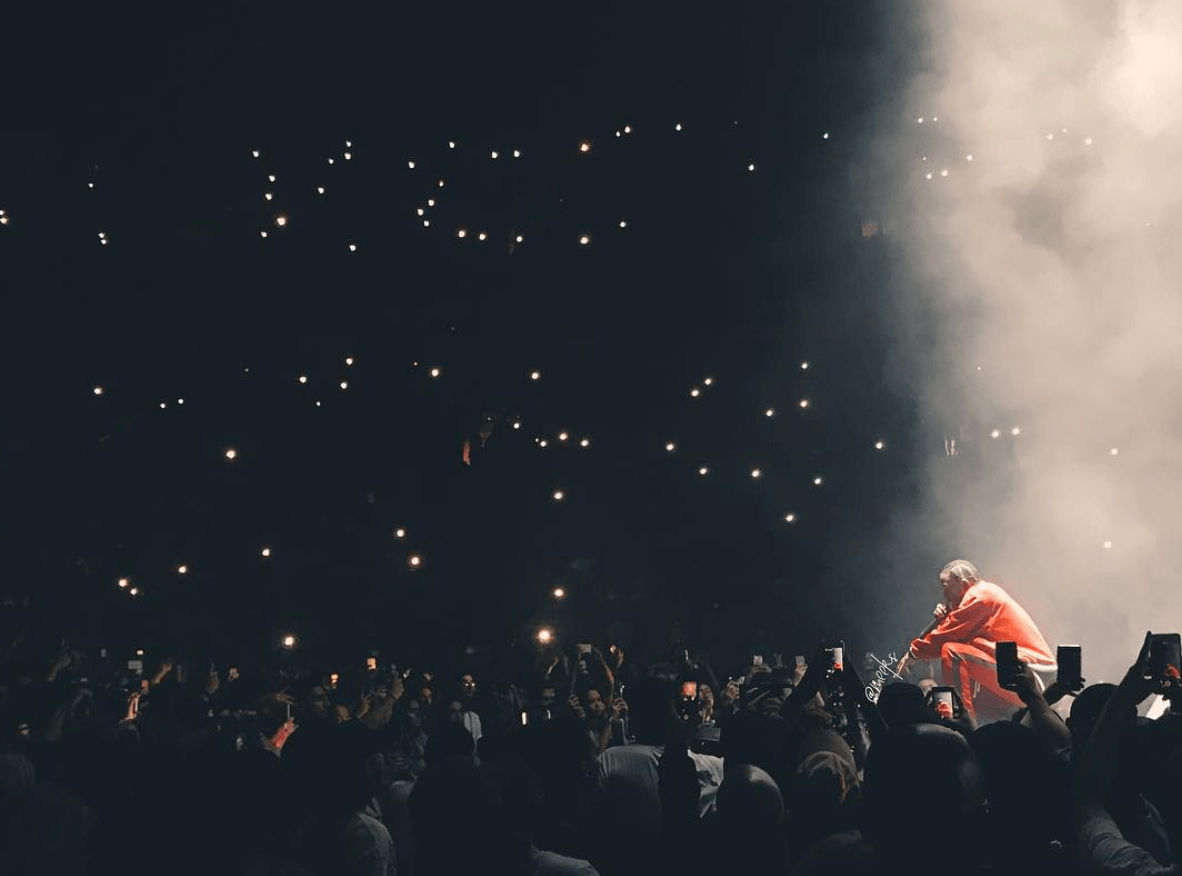 Kendrick Lamar gave a blistering performance at his Rogers Arena show on Wednesday night, proving again why the star is worthy of all of the “greatest rapper alive” chatter that has followed his career for years.

Lamar has a long history of killing Vancouver softly with his songs; he owned the 2014 Pemberton Music Festival as a junior act and returned the following year to headline the whole shebang. His current DAMN. Tour is one of the summer’s most anticipated treks; tickets sold out immediately after going on sale in May, forcing him to add multiple shows in cities like Los Angeles, Brooklyn, and Toronto (where he’s scheduled to perform on August 23).

Even his tour merch is a major sensation – Vancouver fans began lining up at 4 am (!) on Wednesday morning for the DAMN. Tour pop-up shop on Pender Street to open. Those who waited six hours in line had dibs on exclusive items not available at the concert – those yellow DAMN. long sleeved tees that you saw all over downtown yesterday sold for a cool $65.

So why all the hype?

Lamar has been in the game for 12 years making rap tunes, gaining notoriety for mixtapes released under the pseudonym “K-Dot.” After signing with Interscope Records at 25, he dropped good kid, m.A.A.d city in 2012 and everything he’s touched since then has turned to gold (or platinum: Lamar’s last four albums have all sold at least a million copies).

2015’s To Pimp a Butterfly was hailed by critics (and President Barack Obama) for its brutally honest lyrics and fearless amalgamation of styles (including, but not limited to, rap, funk, jazz, and spoken word). The album won a handful of Grammys, paving the way for Lamar’s crossover masterpiece DAMN. Despite being just three months old, DAMN. is the year’s best selling album so far and gave the Compton rapper his first-ever number one single as a lead artist (the insanely addictive “HUMBLE”).

So it was a surprise to no one that Vancouver fans came out in droves on Wednesday night to witness history in the making. After performances by openers D.R.A.M. and Travis Scott, who spent half of his 45-minute set perched atop a mechanical bird that flew above the crowd, the stage was cleared for King Kendrick to make his dramatic entrance at 9:30 pm.

Lamar’s set started with a bang – literally. A huge blast of pyrotechnics and 18,000 screaming fans greeted the rapper as he opened with “DNA”, the first of nine tracks performed from DAMN. He was then joined onstage by a sword-wielding ninja for “Element”, a visual theme that continued through out the night.

“I go by the name of motherfucking Kung Fu Kenny!” he declared at one point.

After “King Kunta”, Lamar turned the arena into a giant dancefloor with a pair of songs from last year’s untitled unmastered experiment, but the crowd collectively lost its shit when he tore into old school tracks “Swimming Pools” and “Backstreet Freestyle”. “I see I got a lot of Day Ones up in this bitch, Vancouver!” he said to huge cheers. “It’s been a long time since we seen each other, so please believe that this will be the live-est fucking experience you’ve ever felt in your entire LIFE”.

He made good on that promise, delivering a fiery show that kept fans on their feet for each of the show’s glorious 100 minutes. After performing “LUST” and “Money Trees” inside of (and on top of) a lighted cube on the arena’s b-stage, Lamar alternated between new and old hits for the duration of the evening.

The Grammy Award-winning “Alright” had audience members struggling to keep up with his fast and furious rhymes, but they got a second chance when Lamar had them scream the first half of “HUMBLE” a cappella. It was a huge moment (in a show full of huge moments), and the rapper was clearly moved by the crowd’s massive support.

“We appreciate every single last one of y’all,” he said before wrapping up with album track “GOD”. “We still got the same amount of respect for each and every individual out here because you helped me get on this stage.”

Kung Fu Kenny did not allow professional photography at his show last night, so here’s what the DAMN. Tour looked like from the crowd.

DAMN. I got lucky. I lost my breath, voice and a few pounds at once. I figured out that I can go to @kendricklamar shows forever.

That time Kendrick Lamar levitated out of the floor and into our souls ✨🎤 . #kendricklamar #behumble #sitdown #rogersarena #yvr #vancouver #loyalty #kingkunta #thedamntour #DAMN

When Kendrick pops up next to you.. 😍 #Vancouver #Vancity #kendricklamar #thedamntour #kungfukenny