Ken Pickering has been doing the same thing for the last 29 years, and as the Artistic Director of the TD Vancouver International Jazz Festival, he wouldn’t have it any other way.

After nearly three decades, Ken reflects back to his personal experiences in creating and growing the largest jazz festival in B.C. 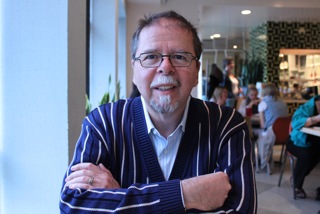 Ken Pickering first started listening to jazz at 15, and has been a devoted fan ever since. Before co-foundering the festival, Ken worked in community radio for many years, and even owned a record shop that specialized in jazz. Ken’s personal vinyl collection soars above 5000 albums, and he thinks it’s wonderful for the jazz world that vinyl is back. That being said, he’s has fully adopted new technologies as well; on the Jazz Festival’s website, you can stream and purchase each musician’s latest work.

After speaking to Ken about this year’s program, it’s evident that a love for live music fuels his work. Ken “tries to bring the world to our Vancouver stages,” keenly aware that his festival is a major hub for connecting musicians (both local and international) with audiences. There’s a quiet pride in everything his team has accomplished, in putting on 300 shows each year, enjoyed by over half a million Vancouverites. His sights have moved from humble startup beginnings to maintaining the legacy of the festival – with a hefty dose of risk-taking mixed in, of course.

There still aren’t enough live music venues. During his tenure as the Jazz Festival’s one and only AD, Ken has seen exclusive venues for musical performances come and go. As with all musicians, he’s had to become crafty in envisioning new spaces and experiences around town. While the live outdoor concerts are undoubtedly the Jazz Festival’s most well-known shows, Ken also looks to the exciting shows this year at the Roundhouse in Yaletown and at the Ironworks for a more eclectic, indie beat.

Community is what it’s all about for Ken. The Jazz Festival supports and nurtures Vancouver’s local musicians through a variety of collaborations and residencies, keeping it grassroots and connected.

Unsure of where you stand on jazz? Ken says the live music experience is key, especially in an era where music is treated as imminently disposable. Sometimes, recordings might not give much in the way of emotional connection, and Ken has seen it again and again at the festival – people just ‘get it’ after they’ve seen a particular show that resonates with them.

Jazz also gets a bad rep for being less approachable than other genres, but you won’t find those pretensions at the festival. Modern jazz encapsulates everything from groove to swing, from heavy metal to electronica. Just with any other wide-ranging genre, the key is to find something that speaks to you. The Festival’s program offers up some of the most interesting and innovative works in jazz today, all over a very short 12 day run. The box office’s staff are well-versed in giving suggestions, or you can find Ken personally on twitter, tweeting about jazz and beyond.