“When music isn’t perfect it shows its human quality, and that’s kinda what you get with recording live off the floor. Its not done by a computer or a machine, and that’s the basis of rock and roll. And as musicians, if we didn’t do something perfect on the record, we have to live with that. It’s like a snap shot in time…recording the energy at that moment.”

Showing a distinct appreciation for the honest blues, soul, and rock and roll of the 60’s and 70’s, and skillfully emulating the vintage sound of bands like The Rolling Stones and Led Zepplin, Damn Fools have burst onto the Vancouver music scene with a clear vision in mind: to be a great live band, and record music the same way as when rock and roll was in its prime.

The Vancouver-based six piece outfit that formed in the summer of 2012, has had one heck of a freshman year with a recently debuted first album, Off the Floor, playing summer music festivals such as Keloha in Kelowna, and scoring a spot in the 99.3 The Fox Vancouver Seeds 2013 Top 20 line up.

Damn Fools sat down with Vancity Buzz at their Vancouver studio to discuss how they came together, their vision as a band, the changing music recording scene, and that special something that they’re trying to bring back to honest rock and roll.

Andres: Two of you are brothers, and I understand there was eventually some carry over in members from your previous band [Fully Loaded], but how did Damn Fools come together?

Mike Twining: Well, Alex grew up across the street from us years ago, and when he came back from three years in Australia, called up Andrew looking to jam.

Alex: Ya, I left to Australia for three years in 2008, but the summer before I had left I had gotten together with Andrew and jammed. Well, we had seen each other at some party the night before, and I knew he played guitar. I had only been playing for about two years, at that point. He was really drunk and I said, “ Hey man, we should jam tomorrow!” He was like, “ Yaaaaa…totally!” I called him the next day and he was like, “F***…ya…I did say that didn’t I…” “Ya man, I got beers and everything.” He came over and we jammed and [eventually] we ended up establishing a sort of guitar relationship…even though ironically we had grown up across the street from each other [years earlier].

And then, three and half years later when I came back, he was kind of the only guy that I knew in the music scene out here. None of my other friends played music. I sent him a message on Facebook and said something along the lines of, “Hey man, how are you doing? Do you know anybody looking for a guitar player?” Not even asking to be in the band or whatever. I actually didn’t know what they were in the process of doing that. He got back to me and suggested I come down to an open mic event they were having. I came down, and played some tracks. What’s funny is that later on Andrew told me that when he got the Facebook message he turned to his brother and said, “ I think I found our guitar player “ haha.

Andrew: We had dropped the old band about two years back at that point, and knew that wasn’t happening anymore. Mike and I also knew that we were writing/scripting different songs, and needed a new spin for them. Our new project was going to be completely different and needed some new blood in it. And right when we were talking about that, this message came through, and I just knew it was going to be right. We told him to come down to the open mic and threw him up on stage to see how he would do on his own…

Mike Twining: A “Let’s see what you got!” type of situation haha

Alex: I think I broke a string, I was so nervous haha.

Mike Twining: We then started to demo some of the tracks that you now hear on the record, and really started working on the songs. We got Alex to lay down some lead on a few of the tracks, and some of the quick demos we were recording.

One of our goals as a band, and as musicians, was always to have a keys player. Along with Chris Ball on bass and Jovan Vujatovic on drums we had our five guys together but still realized that we needed a keys player. So we went out and scoured for a long, long time and put the feelers out there to people we knew in the music scene.

Andrew: Every month I’d check Craigslist and there was only ever one guy on there. The same guy always floating around. I think he was alright, but he already played on like seven other bands, because apparently he was the only keys player in town haha.

So after not looking for about a month and a half, I went back on Craigslist and came across Turner’s ad on there. “Hey man, just found your keys posting on Craigslist.” “What?” “Ya man, do you play keys like you posted on Craigslist?” “Oh man, that’s like a three month old ad on there.” We grabbed a pint afterwards, or something like that and talked about it.

One of our band’s major influences are the Rolling Stones, and I refer back to the Stones a lot. I brought that up during our meeting, and he actually had a recording online he had done on piano of a Stones song, Loving Cup.  It was perfect, and I immediately knew he would be a good fit. We went out for a beer, sent him some demos, and talked about what we wanted to do: a six piece band that loves rehearsing and playing, and that our focus is on the live show. Putting on a great live show! And that was that.

Andres: You just released your debut album, Off the Floor, last month. How was the song writing and development process like for that LP?

Mike Twining: Well, we took all the songs that we had written during those two years that we were “on a break” so to speak, and put them into rotation when jamming.

Alex: I think [Mike and Andrew] had about a half dozen tracks conjured up before we got together, and the rest we kind of put together from a number of ideas. A few of the tracks they had written were just great songs right off the bat and we just needed to get together and practice them. A couple others on the record were a second part of the writing process springing forth, which speaks to what we were each bringing to the table and how the record was developing.

Andres: From what I understand, you had the opportunity to record the LP at a particularly famous Vancouver music landmark. If you can elaborate on that, the decision to record there as opposed to other studios, and what that experience was like.

Mike Twining: When it came down to recording all the songs, what we always wanted as a band was to capture our live sound. We had never been able to do that because the way folks usually record albums nowadays is via layers upon layers in a very modern way of recording and you lose everything that’s “honest” about it; the mood, the rhythm, etc…that’s all lost to the digital sphere.

With our band ideology being about live music and being a great live band, playing great songs, etc, we felt that that’s the way we should be recording: live off the floor of the recording studio. Through some connections, we ended up at Mushroom Studios. Mushroom was this legendary studio [in Vancouver] where a ton of bands recorded. It had a massive live room, that unfortunately wasn’t being used enough, and when we heard that it was going down, we decided to get in there one last time, and record live off the floor in their live room. Everything turned out great, using old analog gear and tape. We got it all mixed together digitally of course, but it was all initially recorded on tape, and so it has that special quality that’s like the room itself is being recorded. It’s honest and genuine, and is hopefully like listening to us live. 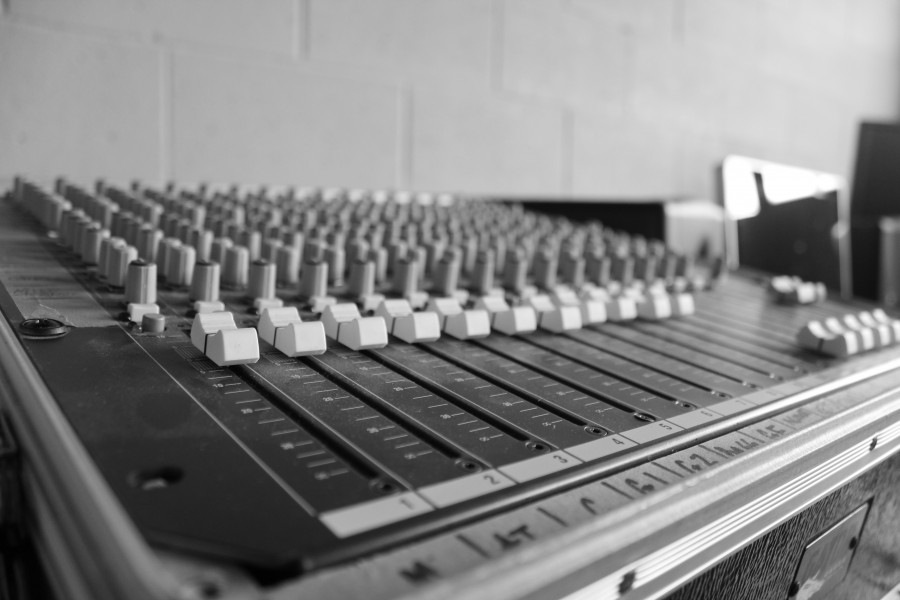 Telling a near parallel story to the fate of Vancouver-based Mushroom Studios, which played a part in recording albums for artists ranging from Sarah McLachlan to Led Zepplin to Tegan and Sara, is Sound City, a 2013 documentary by Foo Fighters lead vocalist/guitarist/songwriter and founder, Dave Grohl. Sound City covers the history of the famed Los Angeles-based Sound City Studios, that similarly closed its doors in 2011, due to the face of the changing music scene, and movement towards producing albums via amalgamations of separate digitally recorded elements and layers, synced by software in post, as opposed to live off the recording floor. 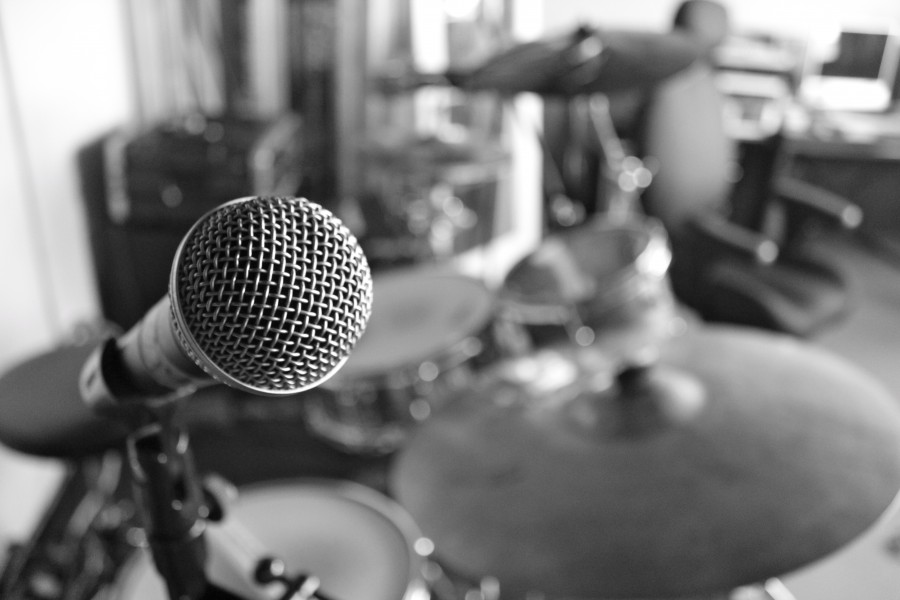 Alex: When music isn’t perfect it shows its human quality, and that’s kinda what you get with recording live off the floor. Its not done by a computer or a machine, and that’s the basis of rock and roll. And as musicians, if we didn’t do something perfect on the record, we have to live with that. It’s like a snap shot in time…recording the energy at that moment.

Mike Twining: We worked at it! Got weekly gigs playing around at a bunch at local bars. Saved up and practiced three times a week consecutively for four months to really nail down all the songs. Then, we walked in on January 3 to 7, four days, 12 songs, all recorded live off the floor.

We also got producer Dave “Rave” Oglivie, who was really the only guy that we trusted to come in and facilitate the kind of recording we wanted to do. Everyone else we worked with in the past had their own way of recording, but Dave was very keen on making it work with how we wanted it. Him and the rest of the engineers and producers really worked with us [on that vision].

Not blessed with the luxury of a comfortable number of weeks to record the album, Damn Fools had to really commit to all their parts, including lead vocals. This meant that unlike traditional recording when vocals would be done separately at a different session, Mike would sing live with the band for each song. Some songs were recorded in only three takes, and using unforgiving vintage amps and guitars, which don’t hide mistakes like modern tech.

Andrew: The worst part about recording [with that schedule] was when you did a great take yourself, and upon finishing the take you were like, “ Yaaa! That’s the one” That’s when you’d hear, “No, I f***ed up.” Haha definitely time consuming, and stressful.

Damn Fools released their first LP, Off the Floor, at the new Vancouver hotspot The Imperial, June 23 2013 to a boisterous full house.

The wonderful Vancouver artist Nick Lepard, currently based out of New York, provides the album cover to the Damn Fools’ newly released, Off the Floor. A charcoal sketch of the real reel tape machine titled – Live Off the Art Room Floor. 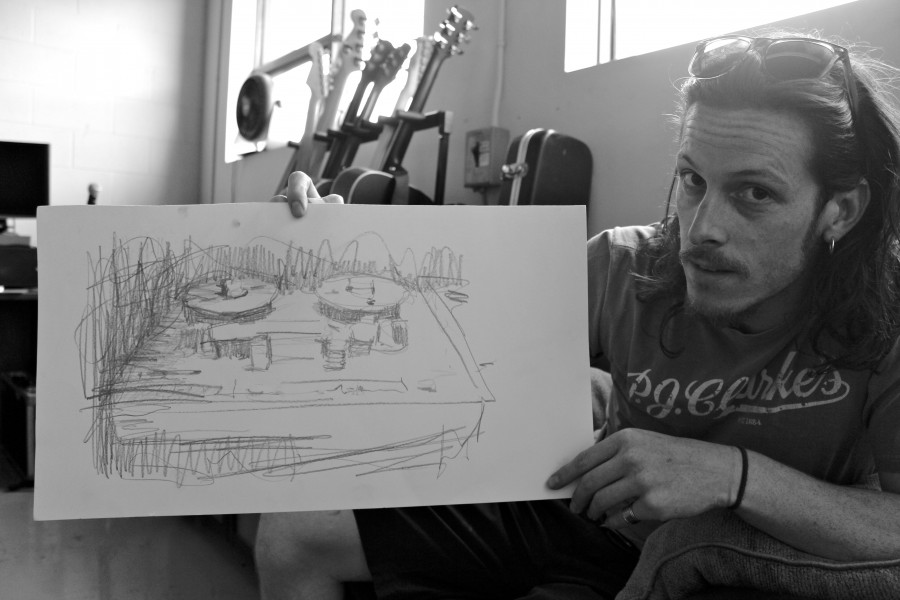 Damn Fools perform this weekend at the Keloha Music Festival in Kelowna, that is headlined by MGMT, Matt & Kim and MUTEMATH. Damn Fools play the Island Stage at 2:00 p.m. on Saturday, July 6, 2013.