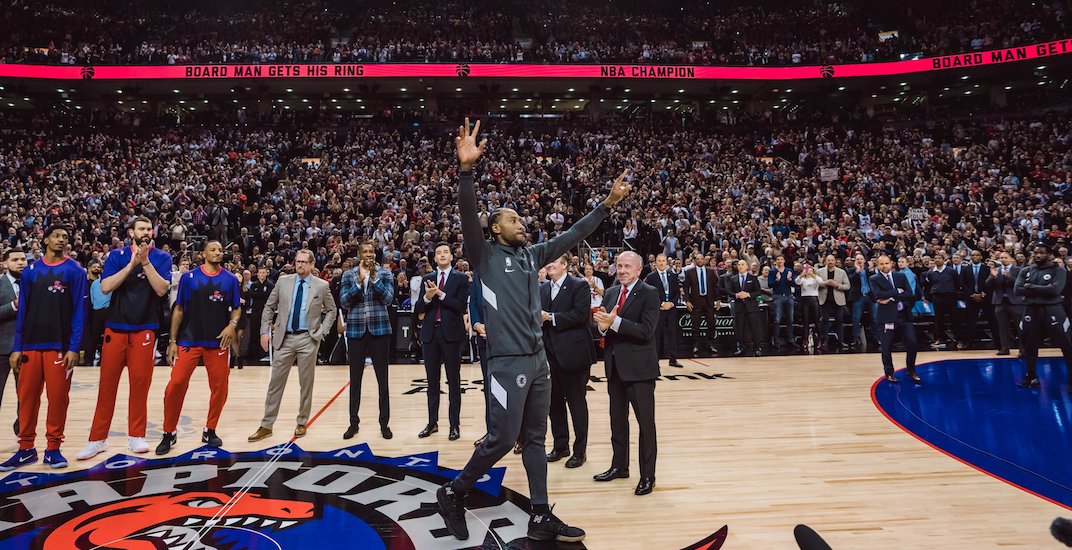 Kawhi Leonard made his long-awaited return to Toronto with the Los Angeles Clippers on Wednesday, receiving his Raptors championship ring during a pre-game ceremony.

Ahead of his first game in Toronto since their historic championship run last season, Kawhi told media that he expected to get booed by the home crowd, but he couldn’t have been more wrong.

Just at first mention of his name, the crowd shot to their feet and erupted in cheers.

A massive standing ovation and "MVP" chants for Kawhi Leonard as he finally receives his championship ring. 👏 pic.twitter.com/Hm9AOcLeDL

As Kawhi did the rounds and shook hands with his former teammates and executives, it was evident from the smiles, that they were happy to see him, particularly his moment with Kyle Lowry — the man who gave the NBA Finals MVP his championship ring.

The moment Kawhi got his ring 🙂 pic.twitter.com/cmfaW39OzS

The Raptors also played a tribute video from Kawhi’s one year with the club.

OK, but the Raptors' presentation of Kawhi's game seven buzzer-beater was AMAZING. pic.twitter.com/gJeLDu2Utv

It’s important to note that the tribute video extended beyond the big screen, lighting up the court with the footsteps Kawhi took during his iconic shot.

The Raptors court has Kawhi’s path to the buzzer beater over the final 4.2 seconds on the court during his video tribute. Incredible. pic.twitter.com/RQrQaKqaDc

Many NBA players have received tributes from their former teams over the years, but Clippers head coach Doc Rivers was blown away by what Toronto displayed.

Doc Rivers says the Raptors' pregame ceremony for Kawhi is the best he's seen in the NBA. pic.twitter.com/5YW7a6H72Y

The praise may have energized the ‘Board Man,’ as once the game started, he became a player on a mission.

Leonard put on a show to the tune of 23 points, five rebounds, and six assists, leading his team to a 112-92 blowout win over the Raptors.

It marked the third loss in four games for the Raptors, as the team has struggled as of late.

“We put ourselves in predicaments where we are getting good shots, but we’ve got to create better shots,” Lowry told reporters after the game.

Leonard, meanwhile, was feeling the love.

"It was a great moment."

Kawhi Leonard talks about getting his ring and the ovation from the city and the fans in his return to Toronto. 🎥 pic.twitter.com/LL8wrYNR4s

“They did a good job putting things together,” Kawhi told a media scrum following the game.

Kawhi also let reporters know which message he chose to get inscribed on the inside of his ring.

In the most Kawhi fashion, he chose one straight-forward message in emoji form: the middle finger.

With this anticipated match out of the way, Toronto can now focus on rebounding against the Brooklyn Nets on December 12.