It may not come as too much of a surprise, but on Sunday, Justin Trudeau officially claimed the leadership position of the Liberal Party of Canada. Trudeau won the election by a landslide – taking 24,668 of the total 30,800 points, about 80 per cent of the vote. The runner-up was Vancouver MP Joyce Murray, with only 3,130 points.

Trudeau looks forward to representing the party in the 2015 federal election, and spearheading the “revival” of the federal Liberal Party. In 2011, the Party reached a historic low, pushing them behind the NDP into third-party status as the Conservatives won a majority.

Recent polls show that with Trudeau in the leadership position, the Liberals are capable of surpassing their competitors – even the ruling Conservative Party. The Conservatives are well aware of this, and began to prepare attack ads against Trudeau even before he was officially elected as leader. 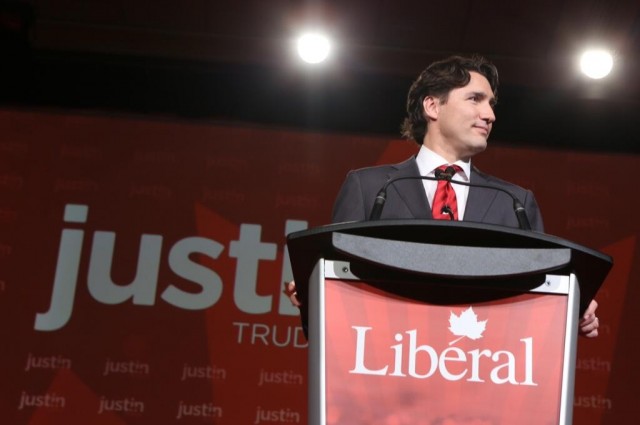 In his acceptance speech, Trudeau echoed this sentiment. He said:

“Canadians share deep values that cannot be shaken, no matter how hard this Conservative Party may try.”

“There is nothing that the Conservatives fear more than an informed and engaged Canadian citizen.”

“I love this country, and I believe in it deeply. It deserves better leadership than it has now.”

Trudeau humbly accepted the leadership position of the party, saying: “It’s not my leadership that Harper and his party fears, it’s yours.” Trudeau thanked Liberal supporters and Canadians across the country for inspiring him with their determination, and reminded them that “we have won nothing more and nothing less than the opportunity to work even harder.”

Trudeau is right. Winning the Liberal leadership may have been easy, but the road ahead is not so certain. Trudeau and the Liberal Party will have to work hard in the next few years to demonstrate that they are the right choice for the future of the Canadian government.

It’s official: Justin Trudeau has been elected the new leader of the Liberal Party of Canada. #lpcldr

#Trudeau I will not vote for Justin because who his father is.But the quality,trust of candidate.Great character, a core he seems to have!

I like Justin Trudeau because they played “The Veldt” by @deadmau5 as his walk off music! #LPCldr #cdnpoli — Unadari Philips (@Unadari) April 14, 2013

Good acceptance speak by Justin Trudeau. Humble yet directly speaking to his priorities and the challenge ahead #lpc #cdnpoli — Adam Johnson (@AJohnsonBC) April 14, 2013

Justin Trudeau is the new leader of Liberal Party as of today. Hope to witness him end this nightmare called conservative government. — Arash (@realArash) April 15, 2013

Written by Jenna Hussein, a political columnist at Vancity Buzz. Connect with Jenna on Twitter at @jennahussein.