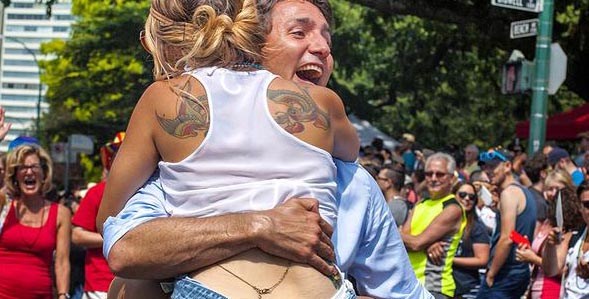 Justin Trudeau has promised that he cares about Canada’s youth, and at the Vancouver Pride Parade last Sunday it was very clear that Canada’s youth care about him.

While marching in the event, the Liberal leader got an arm full from an apparent supporter who jumped into his arms as he passed. He was soon surrounded by two more young women, who piled on the hugs.

Trudeau caught some flak over the weekend, as he was unavailable for comment following Prime Minister Stephen Harper’s calling of the start of the Federal election period. He was on a plane to Vancouver to attend the Pride Parade, and had a few choice words for his critics at the start of his campaign.

“I made a promise to the half a million British Columbians who will be celebrating Pride this afternoon, celebrating Canada’s diversity,” he said. “And I’ll tell you something, no one’s going to get me to break my word, particularly not Stephen Harper.”