For many people, their dreams of seeing Justin Bieber live in concert came true on Friday, March 11 when the singer rolled through Vancouver on his Purpose World Tour. Unfortunately, those dreams weren’t realized for a handful of people who say they were sold fake tickets.

Stacy Jewer is one of them. She tried to buy Justin Bieber tickets the day they went on sale, but they were sold out before she even had a chance. From there, she decided to try her luck on Craigslist.

“I had never bought tickets off Craigslist before, so I was a little bit hesitant – I was also buying for another girlfriend who’s not from Vancouver, so I was in charge of figuring it all out,” Jewer tells Vancity Buzz.

She went through multiple ads – in fact, new ones were being posted daily with varying prices. Jewer emailed several people before getting a response, and she started texting the seller shortly after exchanging phone numbers.

This is a screenshot of the exact ad Jewer says she responded to on Craigslist: 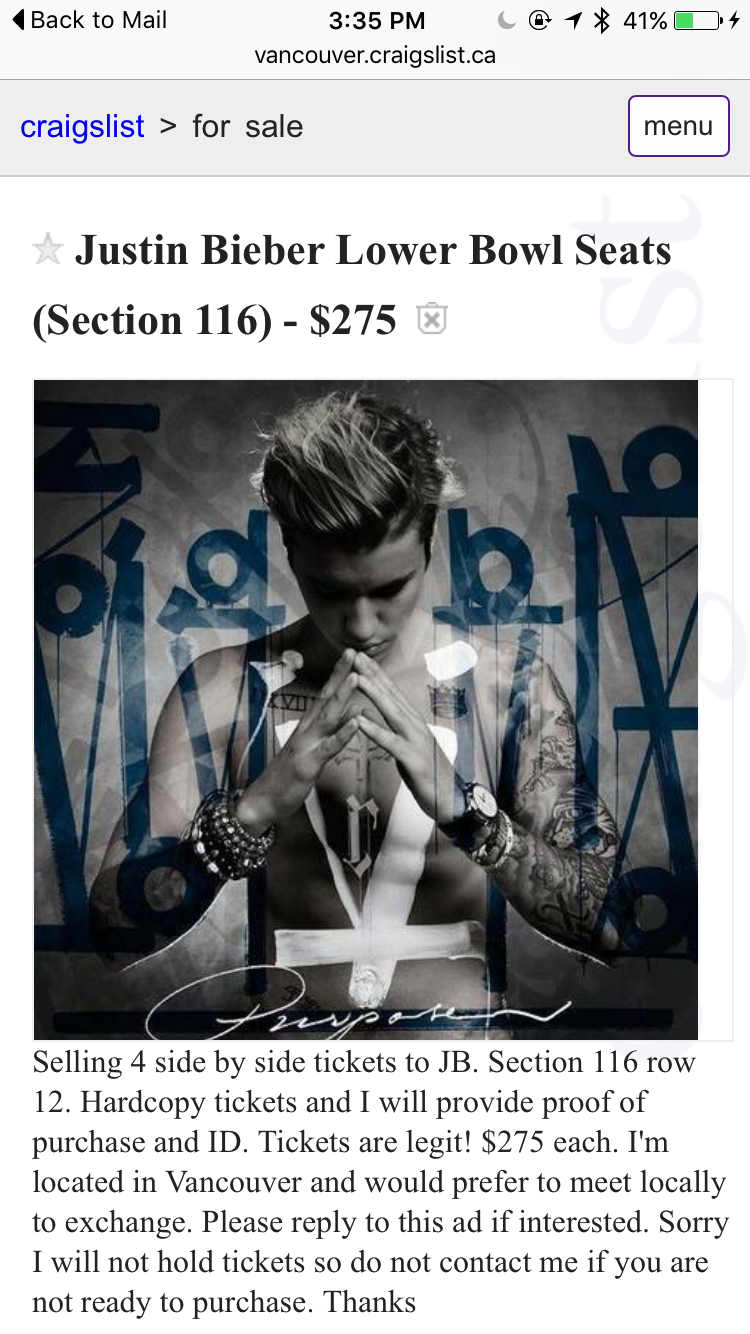 The pair agreed to meet at Pacific Centre and exchanged the tickets at a cost of $520 to Jewer. The seller provided her with a receipt and even offered to show her his ID before they met.

“I never asked for it, to be honest,” says Jewer. “I didn’t even think to ask for it when I actually saw him.”

The receipt looked legitimate – the dates and dollar amounts checked out in Jewer’s mind. She said she felt very confident in her decision.

She sent him a quick text after the transaction to say thank you and went on her way. She didn’t realize her tickets were fake until she was at Rogers Arena and they wouldn’t scan.

“I called the number that I was texting back and forth and it said this number’s not in service.”

Jewer and her friend were directed to wait in a separate line at the Ticketmaster booth where they encountered other people who had also been scammed. Little girls were crying and adults were angry.

She posted on Facebook that she had been duped out of her Justin Bieber tickets, and a friend messaged her with a posting she had come across of another woman who had also been scammed. That woman, Amber Sekhon, had posted a photo of the man she says sold her fake tickets and Jewer says it was the same person who she had met at Pacific Centre just days earlier.

“I Facebook messaged the girl and said ‘hey, what do we do from here?’ And she was really great,” says Jewer.

Sekhon was in a similar situation. She met a man at Oakridge Mall where they exchanged the tickets for cash, but she was a little more cautious. She took a photo of the man saying she would post it on social media if he scammed her, which is exactly what she ended up doing.

“I said, ‘If they’re fake tickets, I’m going to put you on Facebook and I’m going to figure out who you are and I will find you,’ and he said ‘Ok, that’s fine,’ and he laughed about it,” Sekhon tells Vancity Buzz.

Like Jewer, her tickets wouldn’t scan at the door, and she says she wasn’t alone.

“Girls were serious – they were so upset, makeup was running down their face, it was just a really bad scene outside of Roger’s Arena – it was so sad,” says Sekhon. “Girls had spent up to $500 on tickets.”

While she had posted the photo of the man who allegedly sold her the fake tickets to her Facebook page right away, Sekhon filed a police report the next morning. Sergeant Randy Fincham with the Vancouver Police Department said they received several complaints stemming from that night and have a few suspects in mind – however, this isn’t something that is exclusive Vancouver fans caught in Justin Bieber ticket scam to Justin Bieber’s March 11 concert.

“Unfortunately we see fraudulent tickets in relation to the majority of large scale events that take place in the city. This is not limited to one particular artist or event,” says Fincham.

“Buyers should be careful when purchasing tickets from resale sites, and always obtain valid identification from the seller so they have some recourse, should the tickets be invalid.”

He recommends making use of the lobby of the police station when doing Craigslist exchanges – that way, if anything fraudulent happens, the exchange will be caught on camera, there are police officers everywhere, and it might deter would-be scammers from meeting with their victims in the first place.

After posting the photo on Facebook, Sekhon says she received not only messages of support, but other people who had been allegedly scammed by the same person as well, including Jewer.

Sekhon also received messages from people saying the same man had scammed them out of Drake tickets.

Bieber Fever Makes Me A Belieber

Little girls, excited women, and a 20-something year old dude… We sent Zain to meet Justin Bieber fans before the show to make him a #Belieber!