Friday looked to be a normal day for Jaime Stein.

The Vancouverite was ready to leave his Mount Pleasant office before meeting his wife to enjoy a long-planned date night alongside thousands of spectators taking in the Justin Bieber concert at Rogers Arena.

And that’s when all hell broke loose.

“I was heading out of the office when my phone started to ring,” Stein told Vancity Buzz. “Since almost no one ever phones me anymore, I was intrigued. It was a number that I didn’t recognize, so I ignored it. Then my phone rang again. I thought it might be important, so I picked it up. Someone asked me if I still had the tickets. ‘Which tickets?’ I asked. ‘The Justin Bieber tickets from the Craigslist ad.’ At this point, I figured someone was up to something.”

That was the first of over 90 calls Stein would receive over the next few hours.

“I tried to call my wife, but the phone kept ringing so it was hard to dial out.”

Trying to figure out what was going on, Stein sat in his car as dozens of texts and calls began flying in. “I was finally able to get [iPhone’s Do Not Disturb feature] working so no calls came through to my phone and most texts didn’t create alerts.” 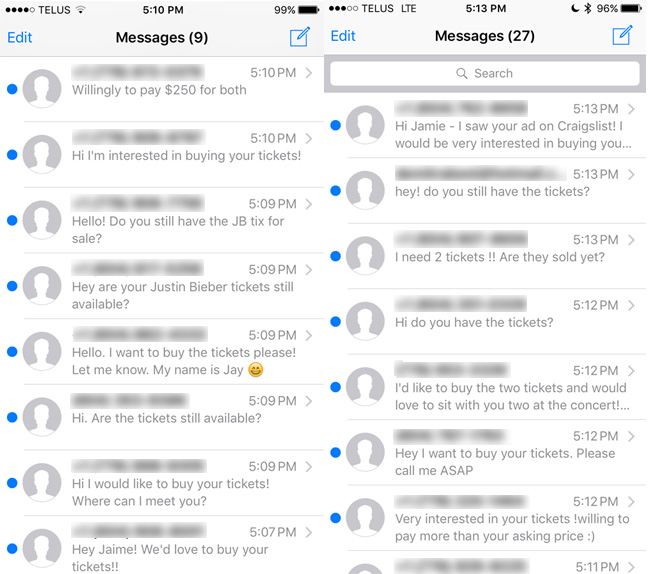 After replying to one attempted buyer, Stein was able to get the URL of this so-called Craigslist listing, which he flagged for removal, only to get an autoreply. 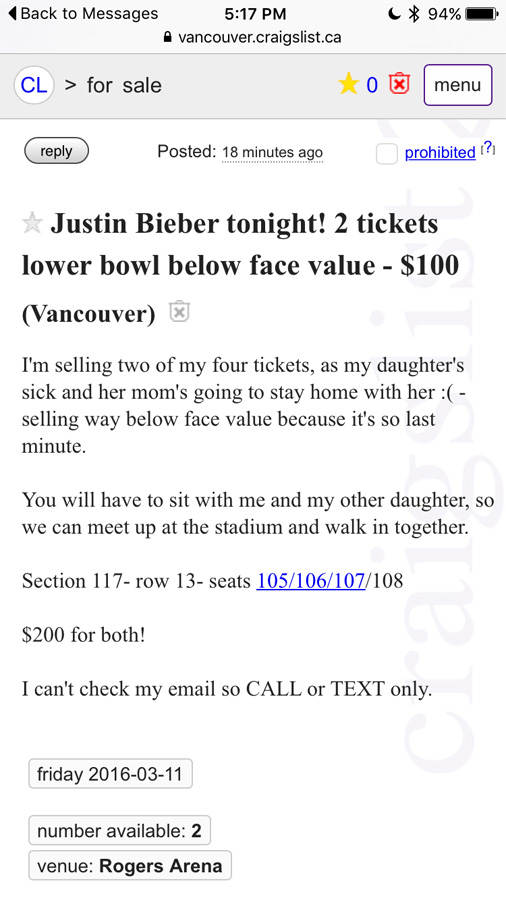 Seeing a colleague’s post about the same thing happening to them a few hours earlier, he started reaching out to his coworkers to try to find out who was behind the whole thing. Around 6:15 p.m., and 140 text messages later, he solved it – his colleague Juan.

When your “friends” make a Craigslist ad saying you have Justin Bieber tix for sale ???? pic.twitter.com/6ekxFKvhl6

Seeing his tweets earlier, CKNW’s Drex reached out and Stein went on air to tell his story. “I had to use my wife’s cellphone do to the interview because my phone was so jammed up with incoming texts and calls that I couldn’t receive the call from CKNW on it.”

“Guy. You’ve had a long week! Figured you needed a break. And you’re such a selfless guy, figured you’d wanna sell em for cheap. Missed the radio interview cuz my phone was dead! I’ll take it down now so you enjoy the rest of your evening.”

In the end, Stein received over 170 text messages, more than 90 phone calls, 2 FaceTime attempts, and had his voicemail box completely filled – all within hours.

Him and his wife enjoyed the show, though, “Bieber knows how to entertain.”

Does Stein have anything planned to get back at his coworker? “I’ll get Juan back, for sure.” And we’ll be waiting.

Some of the text messages Stein received that evening: