A quick trip down a grocery aisle – especially the cereal section – shows many sugary foods and beverages are directly aimed at children with fun colours and cartoon mascots. It seems, however, with obesity and diabetes on the rise in Canada, 74% of Canadians say they’d like to see junk food ads that target children banned in the country.

A new survey from the Angus Reid Institute suggests Canadians are generally supportive of other government moves to combat obesity. Nearly 87% say they’d like laws instituted that require nutritional information to be displayed on the front of all packaging, while 76% wants laws in place requiring restaurants to display calorie counts next to every menu item. 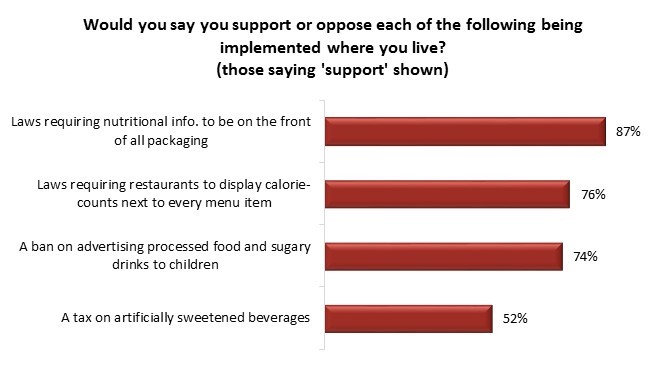 Aside from advertisements, many Canadians (74%) want junk foods banned in institutions like schools and hospitals, and more than half want restaurants to be barred from selling beverages larger than 16 ounces. Another 50% believe introducing tax incentives for overweight people to drop pounds is a good idea.

Despite the fact that Statistics Canada says more than 14 million Canadians are overweight or obese, those polled in the Angus Reid survey seemed to be caught in the middle on the issue. When asked to rate the importance of rising levels of obesity in Canada on a scale of one to five – one being not important, five being very important – 44% chose the number three. 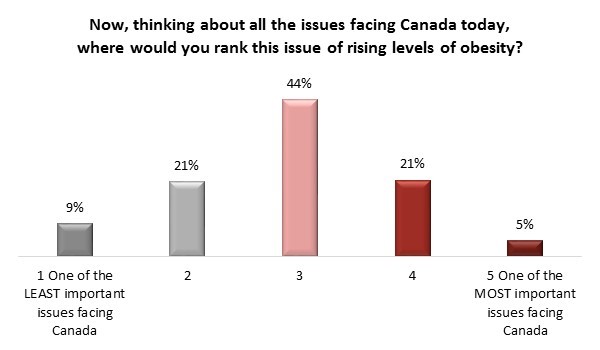 But could food prices be to blame for rising obesity levels in Canada? Another Angus Reid poll released earlier this month suggests some Canadians are choosing unhealthy options in order to save a few dollars at the register.