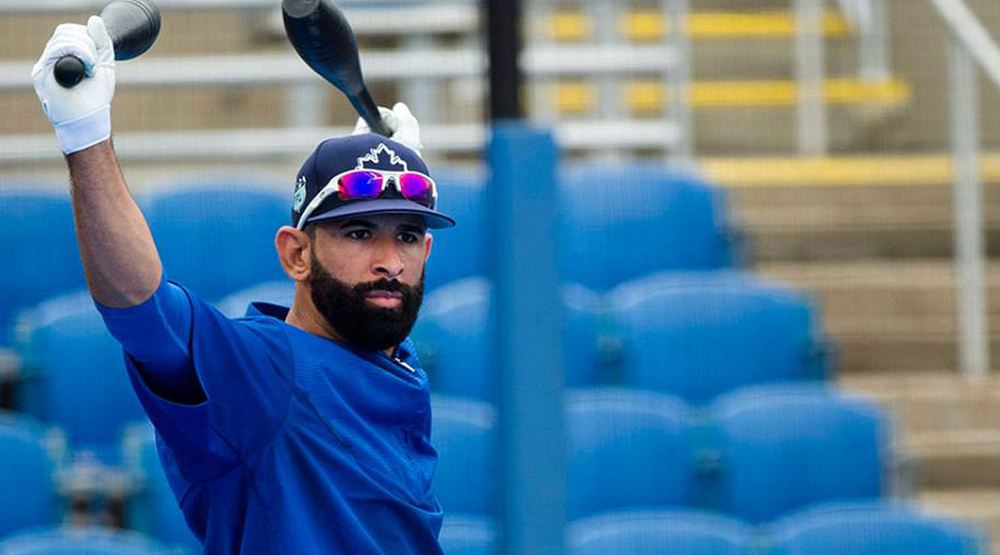 If someone asked “what are Jose Bautista’s strengths?”, the answer would be: towering home runs, bat flips, laser-like plate recognition precision, and the ability to grow a full beard in under 24 hours.

Under weaknesses, listed would be: umpires, artificial turf, outfield fences, and ability to make a strong throw to the outfield.

Last year, Bautista missed close to 50 games in 2016 due to a series of weird and unforeseeable injuries in the outfield.

In one incident, his foot got caught in the turf at Rogers Centre. In the other, Bautista suffered a foot injury when he somehow caught his toe in the fence during a game in Philadelphia.

While these injuries were freak in nature, it merely added to the long list of reasons why the Blue Jays shouldn’t play Bautista in the outfield.

When the Blue Jays decided to bring the six-time All-Star back this offseason, the thought was he may graciously step away from the outfield and agree to play some first base and perhaps even transition to first base full-time. That never happened.

Bautista not only played in the outfield during Blue Jays Spring Training, he also picked up some outfield playing time with the Dominican Republic team during the World Baseball Classic.

For whatever reason, Joey Bats has been a changed man in the outfield in 2017. He can field, he can throw; two aspects of Bautista’s skill-set which were highly criticized last year.

When a team parades a 36-year old out there with a history of injuries, they should probably expect the worst. But Bautista has looked a little like his former self out in the outfield so far.

On Opening Day, not only did Bautista pick up an outfield assist, he also made a game-saving catch in right field. MLB Statcast deemed it to be a five-star catch, having a 21% probability of being caught.

The three-time Silver Slugger has never really been revered for his range in the outfield, but at the very least, the Blue Jays could always count on him to make strong throws from the outfield.

Bautista tried to throw out Delmon Young at first base in a fit of anger from April of 2015, and his arm hasn’t been the same ever since.

Another sign his arm may finally be back? Bautista caught a lot of people’s attention by made a clutch throw from the outfield during the World Baseball Classic.

During Monday’s Opening Day game, Bautista made a solid throw from right field to nab Chris Davis at second base. In total, Joey Bats had two outfield assists against the Orioles. To put that in perspective, he had five outfield assists the entire 2016 season, playing 91 total games in the outfield.

Not to say Bautista will play Gold Glove-calibre defence this year for the Blue Jays, but he just needs to be a capable player in the outfield this year – that’s it.

Bautista’s range and arm have diminished over the past few years, but he’s still an extremely capable player at the plate. His plate recognition is among the best in baseball.

These days, Bautista is known for his power, so all he has to do is stay healthy enough in the field so he can keep doing damage at the plate.

Given the Blue Jays’ lack of outfield options, the club can’t afford not to have Bautista playing right field for them every day.

The Blue Jays’ regular season may only be in its infancy, but you can bet the team likes what they’ve seen so far out of Bautista.