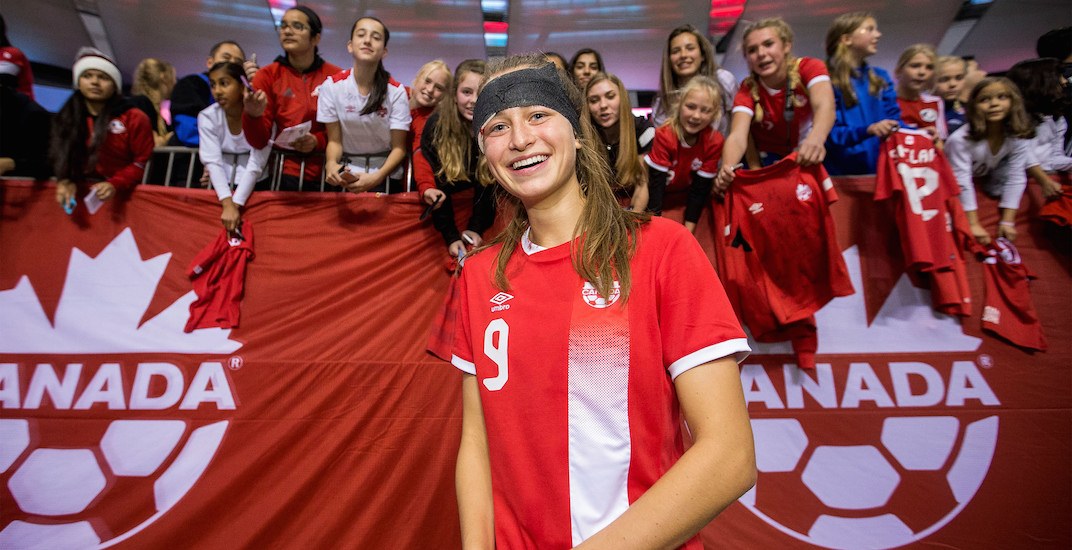 The beautiful game gets marred by the theatrics of players who choose to dive and fake injuries to get an edge. For casual soccer fans – particularly those in North America – it can be a real deterrent from enjoying the sport.

One of the reasons why I love women’s soccer – other than the fact that Canada has one of the best teams in the world – is how rarely the women get involved in that kind of nonsense.

The amount of diving and faking in women’s soccer is a fraction of what you see from the men, and that was on display once again during Thursday night’s international friendly between Canada and the United States in Vancouver.

In front of a crowd of 28,017 at BC Place, 16-year-old Jordyn Huitema showed the kind of toughness we don’t always see in the men’s game. Coming on as a second half sub in the 90th minute, the Chilliwack, BC native took an elbow to the head from American Kelley O’Hara.

Huitema, who was cut above her eye, didn’t complain. This, despite the fact that a foul was given against Canada on the play, and the fact that she was leaking blood.

If this was men’s soccer she surely would have stayed down for minutes, trying to draw a penalty. She would have pleaded her case to the referee. But instead?

I mean, look at that swagger…

She tried patching up the cut herself…

…But to no avail.

The referee stopped play after noticing the blood, and by rule Huitema had to get patched up.

The teenager would have walked off the field for repairs if not for head coach John Herdman telling her to go down and get bandaged up on the field, thus avoiding having Canada play a woman down.

Huitema’s reaction was hilarious, smiling at the sight of her own blood.

She seemed to find the whole moment comical, laughing at the over-the-top bandage required…

Canada came back from a 1-0 first half deficit, getting a goal from Adriana Leon in the 57th minute.

The No. 4 ranked Canadians believed they deserved a better fate after nearly scoring the go-ahead goal late in the match. There’s a bright future for Canada, as a number of youngsters have bolstered their lineup in recent years.

“We look at our roster and we have veteran players and a handful of teenagers,” said captain Christine Sinclair.

Including Huitema, Canada had three teenagers take to the field.

“The crowd was great, everyone was on their feet. The only thing that’s bruising is to not come off with a win tonight,” Herdman said. “There’s an exciting future for Canada here. We have had extensive training leading up to this game, we know what the USA can do and it was nice to see the preparations worked. I am really proud of every player on the field.”