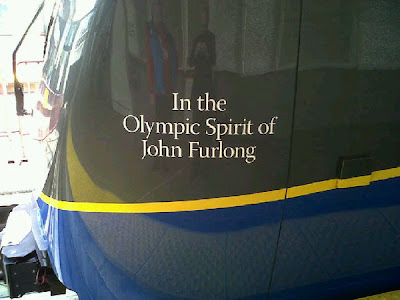 Yesterday, TransLink did something that they’ve never done before. They named one of its new Mark II SkyTrain cars in honour of VANOC CEO John Furlong. The honour was bestowed upon him to commend him and the organizing committee for their effort in bringing the 2010 Winter Olympics to Vancouver and then delivering one of the most successful games of all time.
The full name of the Mark II car is “In the Olympic Spirit of John Furlong.” Not only were the Olympics a success in terms of spirit and medal counts. They were also successful in getting people to use transit. Translink too, should be commended for their efforts in making sure people got to their destinations smoothly during the games. However, once the games were over, that could no longer be said.

The questions remains, what will it take for Lower Mainlanders to embrace transit? During the games our ridership numbers were only behind Mexico and NYC. Think about it for a second. Two of the largest metros in North America and we were third, that’s impressive.

Vancouver is already a good city for public transit, however, one day it will be one of the best. The UBC line and the much delayed Evergreen line are a must.
VancityBuzz.com