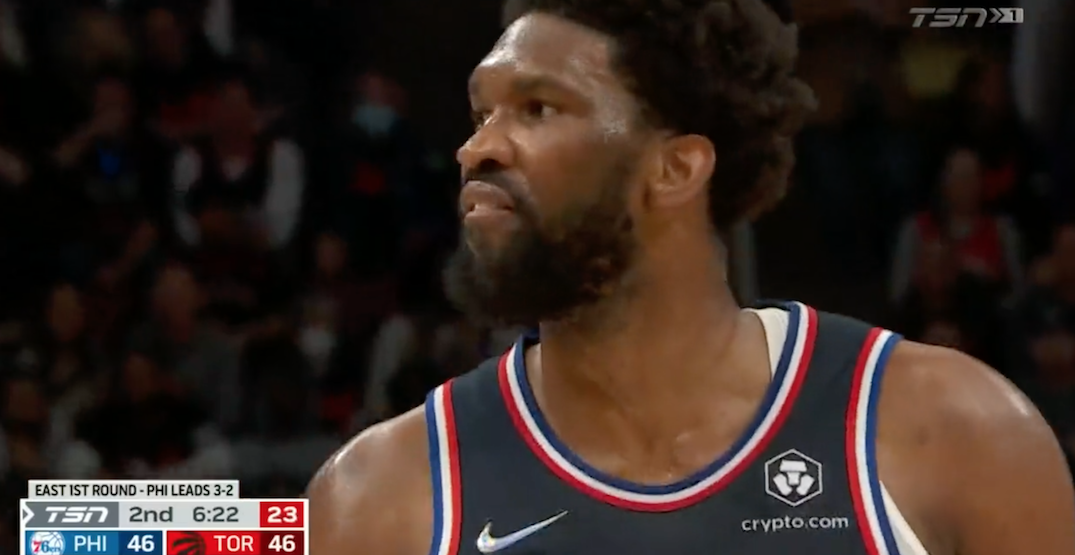 The seven-foot Philadelphia 76ers big man scored 16 first-half points in Game 6, so maybe not, but they did get his attention during the second quarter.

Embiid wasn’t happy about the officiating for much of the first half, and was seen complaining to the referees about missed calls on a few occasions, which is ironic of course, because after Game 2, he told Nick Nurse to stop complaining.

“I told him, respectfully, to stop bitching about calls,” Embiid said.

Embiid drew the ire of Raptors fans during the 2019 playoffs, and he’s the target of their taunts in this series as well.

So when Embiid was seen complaining, raising his arms in the air after what he thought was a missed call, Raptors fans at Scotiabank Arena were all over him.

Embiid’s response? He swore at them.

Joel Embiid going at Raptors fans in the first half 😳pic.twitter.com/mVj81DEsea

Joel Embiid outmuscles the Raptors to tie the game, 46-46.

Embiid clearly unhappy there was no foul on the play #WeTheNorth pic.twitter.com/UIGgWuw18p

The Raptors trailed 62-61 at halftime, in what is a must-win game for them. Down 3-2 in the best-of-seven series, the Raptors are trying to become the first team in NBA history to advance after losing the first three games of a series.