I fly to #Windsor, #Ontario on Monday & on Tuesday I’ll be at City Hall plaza to wait for Marc to cross the US-Canada border as a free man!

As the tweet says, Marc Emery has finally come home. The Prince of Pot has done almost five years in an American prison for selling pot seeds on the internet.

Harper and the Conservatives had no problems gift wrapping and sending one of world’s biggest marijuana advocates to our neighbours to the south.

Over the last few months, Marc sat in a Louisiana prison a supposed free man. He served his time but the wheels of justice turn slowly in America, and when you have been a pain in the ass for both governments on either side of the 49th parallel, you can expect delays when it comes to processing and deportation back to Canada.

As ridiculous as many feel Marc Emery’s arrest was, the marijuana martyr’s return will be a big boost for the legalization movement.

Our Federal Government turned their back on a Canadian as Marc Emery’s arrest appeared to be nothing more than petty political revenge.

The DEA put out a press release when Emery was arrested that still to this day doesn’t make a lot of sense. 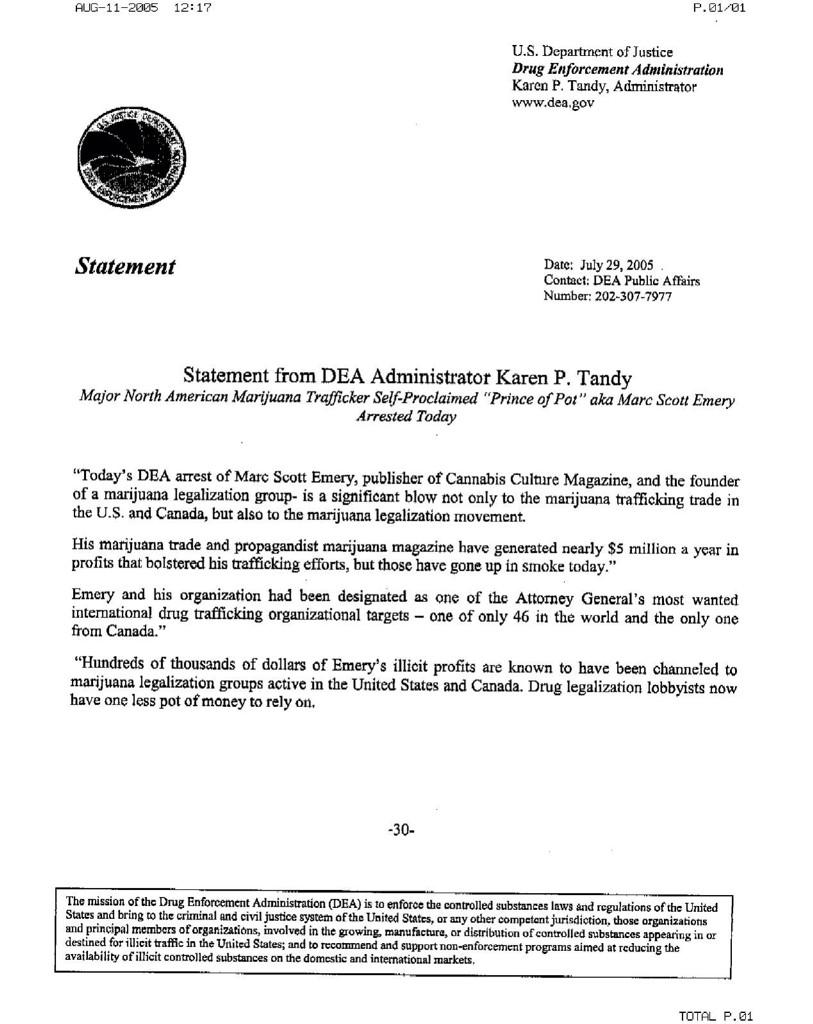 Marc was not a drug dealer nor did he fund drug dealers. Yet when you want to arrest somebody, don’t let the truth get in the way of a good story.

If you go on the internet now, there are hundreds of websites selling all kinds of marijuana paraphernalia and actual weed that can be delivered to your door. Have any of them been arrested? What was the point anyway? It never made sense considering we are dealing with a Harper Government that has committed worst atrocities against Canadians.

The point was to set an example. It was to try and squash a movement that the majority of Canadians supported. Marc Emery became a POW in Harper’s useless war on drugs.

While the Prince was doing hard time in America, his lovely wife Jodie Emery was continuing to do great work in his absence. From speaking engagements, to loads of media, Jodie became the face of legal weed.

Now the Princess of Pot is setting her sight on politics. She has thrown her name into the hat to become a Liberal MP in the East Vancouver riding, a district currently under the care of NDP Health Critic Libby Davies.

Liberal leader Justin Trudeau has promised, that if elected in next year’s Federal election, that marijuana would be legal to purchase and smoke across the nation. Who better to join the party than Jodie Emery? She has had experience working with the BC Green party as well as the NDP. 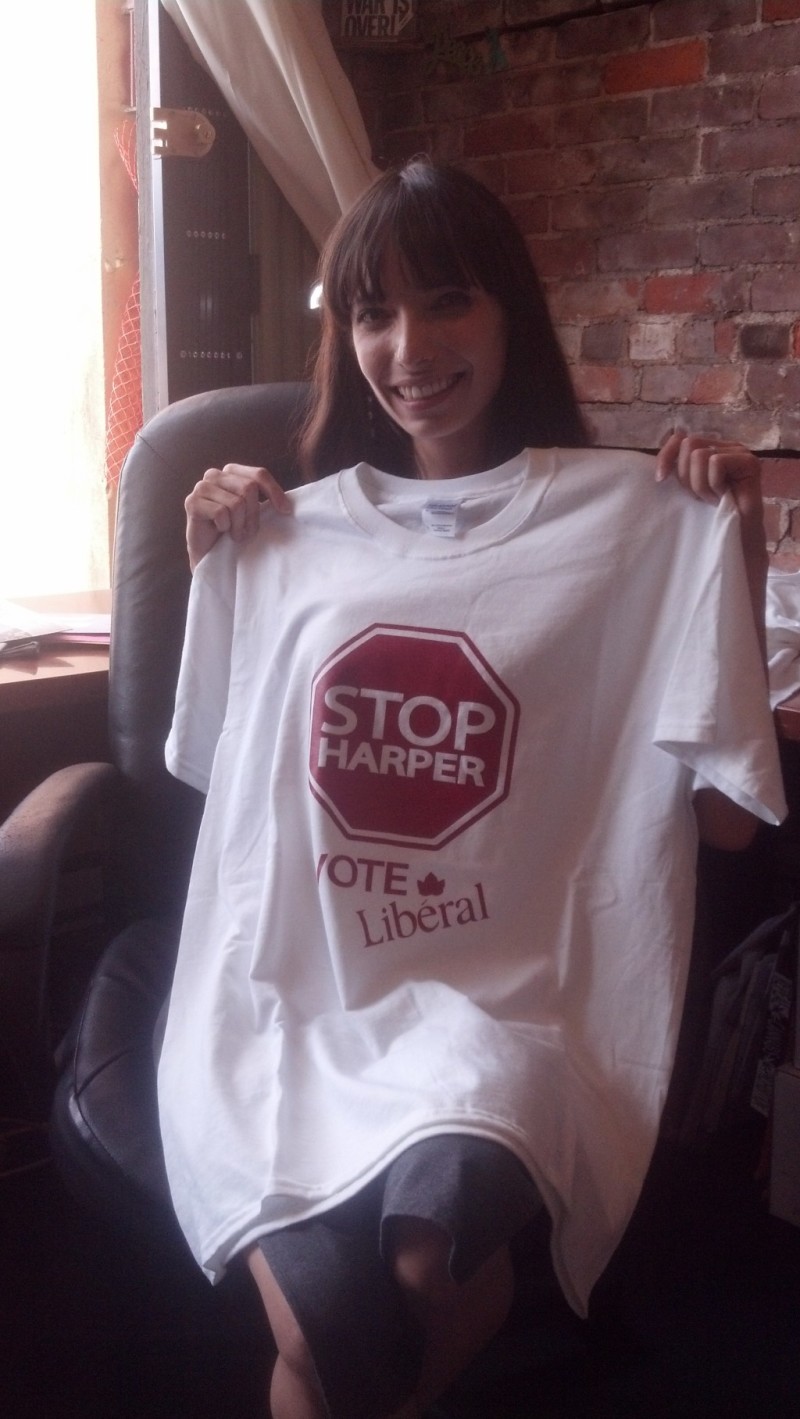 “I’m not really a party hopper; I’m more of a policy and principal kind of gal,” said Jodie from her office at the Cannabis Culture Head Quarters in Vancouver. “So when the Liberals said that they are going to end marijuana prohibition, I was like ‘yeah I’m all for it.’ Just like ten years ago Marc and I supported the NDP for wanting to decriminalize it [marijuana] because that is all there was, it didn’t mean we were socialists it meant we had to be pragmatic about what options we had.”

Some have scoffed and maybe laughed at the idea of Jodie Emery going to Ottawa, but when one listens to her speak you can’t help but listen and realize that there is a lot of truth and passion in her convictions. She has a magnetic personality and a passion that many, including the younger generation, can get behind. The problem is, is Ottawa ready for Jodie?

“I read something about me with a headline that said Jodie Emery: Nightmare Dream Candidate. I definitely have a lot of support but there are people who aren’t that excited. Half of the Liberal party probably don’t want me to be involved,” laughed Emery.

“I think the Liberal Party is uncomfortable because nobody else wants the riding here in East Vancouver or go against my friend NDP Health Critic Libby Davies,” Jodie said. “Trudeau has promised positive campaigning and what more positive campaign could be run between me and [Libby Davies] whose work I would love to continue and carry further.”

It is up to the Liberal party whether they want a “pot smoking rebel” as part of their team, but if the Liberals want to win the election they are going to have to think outside of the box and go after the younger voters who have become disillusioned with politics and a Prime Minister who has alienated a nation.

Whether or not Jodie gets the nod, plans are being made for a Canadian wide Emery tour. Now that Marc has returned to Canada, you can expect many speaking engagements including a national University tour.

“Whether I end up running or not, Marc and I will be putting our full support behind the Liberal Party. We will be going on a national speaking tour to tell people to put their support behind Justin Trudeau,” Jodie said excitedly.

“We will be doing a paid University tour and telling students to go and vote. Elections Canada is not even allowed to tell people to vote. It’s madness. They can only tell people where to vote. So who better than to mobilize the young and angry vote than two people who were unjustly screwed over like Marc and I were by this current Government that everyone agrees is cruel.”

Let Emery Mania begin. The couple spent time doing appearances and interviews in Ontario before arriving home to Vancouver on Sunday to a big reception.

Marc Emery claims he can rally over a million votes to the Trudeau cause. Here in British Columbia it won’t be a hard a sell. The Conservatives really don’t stand a chance in this province, however the name Trudeau is also a tough pill to swallow for older voters who remember the one finger Pierre Trudeau salute.

That said, the end of marijuana prohibition might be just enough for most British Columbians to cast a vote the Liberal way.