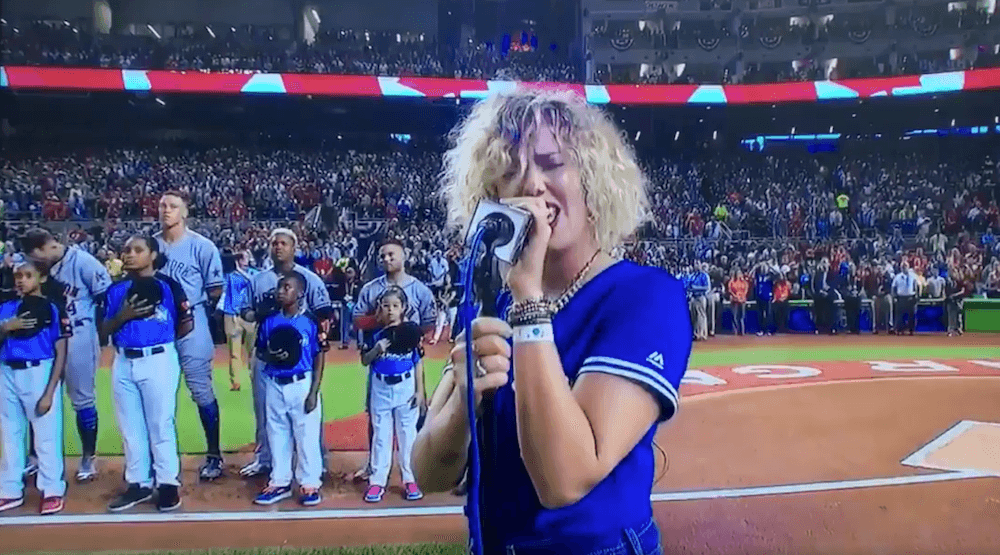 It was the talk on social media on Tuesday night.

Canadian singer Jocelyn Alice appeared to giggle during her rendition of O Canada at the MLB All-Star Game in Miami.

After singing the lyrics “God keep our land,” Alice let out a giggle, before continuing on with the rest of the song.

What was so funny?

The Calgary recording artist explained herself on social media on Wednesday.

“A BIG thank you to the MLB for one of the best days of my life yesterday,” Alice wrote on her Facebook Page. “I giggled because I saw some fellow Canadians on the big screen and was overcome with excitement in that moment. I love my country. I am so proud to be Canadian.”

Here’s an angle that shows what Alice saw on the big screen:

Here’s what fans saw on television:

The reactions from Joey Votto & Justin Smoak during the Canadian anthem, was, uhh, something? What’s with that laugh? #Remix #MLBAllStarGame pic.twitter.com/QaofBFbVK8

There was some backlash on Twitter on Tuesday night (internet gonna internet), but this isn’t close to the controversy we saw at last year’s MLB All-Star Game in San Diego.

Last year, one member of Canadian singing group The Tenors changed the lyrics to the Canadian national anthem to include “all lives matter,” sparking a firestorm of criticism. The incident resulted in Remigio Pereira being kicked out of the group and the Tenors issuing an apology.

Alice will be able to get back to making music.