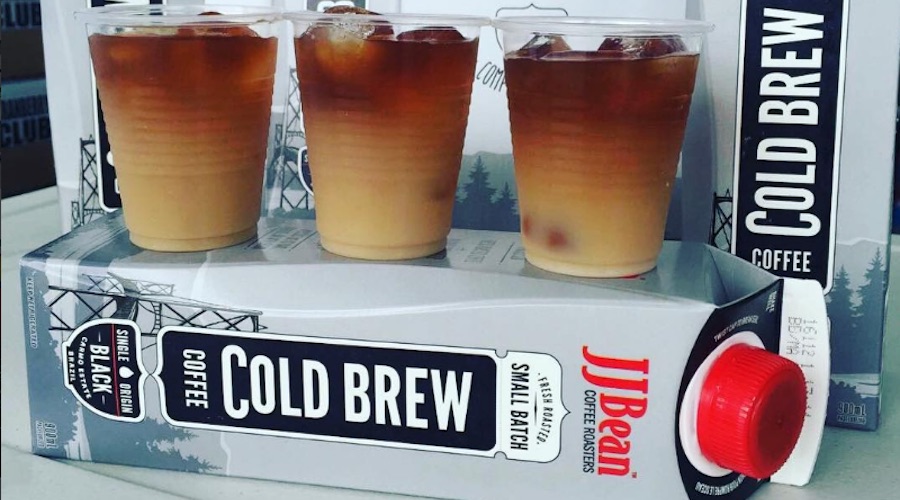 Cold brew has really changed the way Canadians consume coffee, especially in the warmer months. It’s not surprising to see so many local coffee roasters and cafés adding the cold filtered item to their menu to keep up with the trend.

Vancouver’s own JJ Bean, itself a forward-thinking and forward-moving Canadian coffee mini empire, has now launched a packaged cold brew that connoisseurs of the cool caffeinated drink will want to check out.

Using the same single origin beans and brewing process as they do with their cafe cold brew, JJ Bean has simply expanded the scale of what they do in order to produce enough cold brew for the Canadian market.

JJ Bean works directly with farmers to select beans–a process done through blind tasting–and roasts the beans in small batches once the beans arrive in BC.

The next step is to move the roasted beans to Kelowna for the grinding and steeping in cold filtered water, which takes about 24 hours, Andrew Cripps, the marketing coordinator for JJ Bean’s cold brew summer launch campaign, told Daily Hive Vancouver.

The only way the brewing method deviates from what happens at the cafe level is in the size of the tank, adds Cripps.

The result is a preservative-free cold brew (ingredients: coffee and water) that’s packaged in a carton and available for purchase at grocers, retailers, and even JJ Bean cafes.

Since so many bottled cold brews are single serve (and in glass bottles), JJ Bean is pleased that their cartons offer customers three to four servings–which means you can stash it in your fridge and enjoy for a few days.

Of course, things get a little tricky when you want to find a carton of cold brew at your grocery store; it’s not like there’s a “cold coffee” section already. That means JJ Bean’s cold brew will be the lone eagle in the “fresh foods” section next to juices and smoothies and such at stores like Save On Foods in Western Canada, Urban Fare, and Nester’s (with Whole Foods coming aboard in late June, and more major retailers to follow this summer).

You’ll also find some pop-up cold brew cafes around town this summer, keeping in the very Vancouver vibe of the family-owned JJ Bean. Their team will be at events like Jazz Fest and popping up in local parks, along the seawall, and at Save On Foods and Nester’s locations, too, offering tastings. Follow @liquidcreations on Instagram to see where they will be next.