Vancouver City Council has approved a rezoning application that will allow the construction of a multi-tower complex that will includea 54-storey, 526-foot tower – the third tallest in the city after the Shangri-La Hotel and the Trump Tower currently under construction.

The project was approved last night in a unanimous vote after a marathon 3-hour public hearing. It will create a new landmark along the Burrard Street corridor as well as an dramatic entrance into the downtown Vancouver peninsula from the Burrard Bridge. 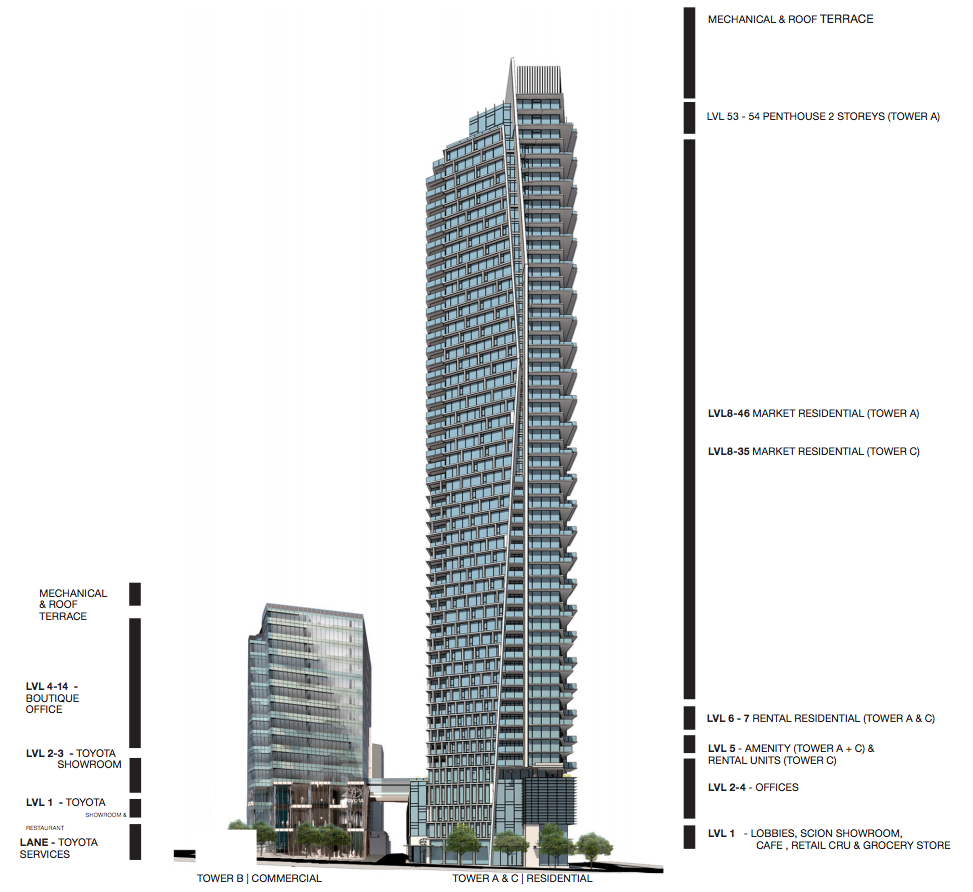 The application to develop a site at the intersection of Burrard and Drake Streets, currently occupied by a Toyota automotive dealership, was submitted by the Jim Pattison Group and Reliance Properties. The project was first proposed in November 2010 and has since gone through design revisions after being reviewed by the City of Vancouver’s Urban Design Panel.

Along the development site’s Hornby Street perimeter, the project will build a 54-storey tower and a 36-storey tower with a 7-storey podium for market residential, rental housing, retail uses including a grocery store.

The allowance of a 54-storey building in the southern part of the downtown peninsula was made possible by the City’s General Policy and the Jim Pattison Group’s promise of contributing $15.8-million in community amenities. This includes a new $7-million LGBTQ community centre (QMUNITY), $4-million for public realm improvements such as additional bike lanes in the neighbourhood, $2-million for the completion of local/city-wide cultural facilities, and $2.8-million for the completion of downtown south parks.

Another tower at 14-storeys in height will be built along Burrard Street for exclusively office uses and will house a 3-storey automotive dealership for Toyota.

The residential towers were designed by IBI/HB Group while the office tower containing the automotive dealership was designed by Bing Thom Architects as part of the project’s revisions for a more unique office building facing Burrard Street.

The office tower now features glass curves to provide the Burrard corridor with a “sculptural gesture” and to allow the building to self-shade during the summer months while also providing ample room for natural light onto the site. The Toyota showroom within the office tower is located at the highly visible corner of Burrard and Drake Streets and is conceived as a “magical house of mirrors, with cars and shoppers appearing to float within the large open volume.”

Public spaces such as plazas and pedestrian corridors are also envisioned for the project site. Public art, a significant green wall and waterfall are among the components of the project’s public spaces.

Overall, the development will have a proposed floor space ratio of 13.33, gross area of 898,755 square feet, 723 market residential units, 87 rental units, 813 vehicle parking spaces and 1,025 bicycle parking spots. Developers aim to achieve a LEED Gold environmental performance and certification for the entire project with elements such as green roofs at the top of all three towers for heat and storm water management, curtain wall system with fritted glazing, and horizontal and vertical shading fins aluminum louvres sunshades.

What are your thoughts on the approved proposal? Let us know by commenting below. 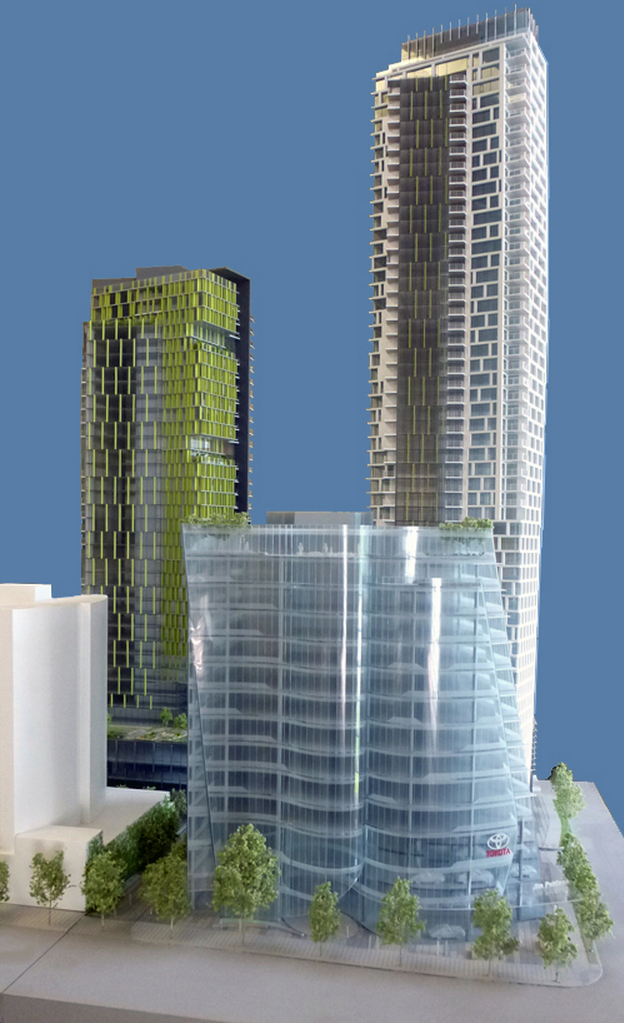 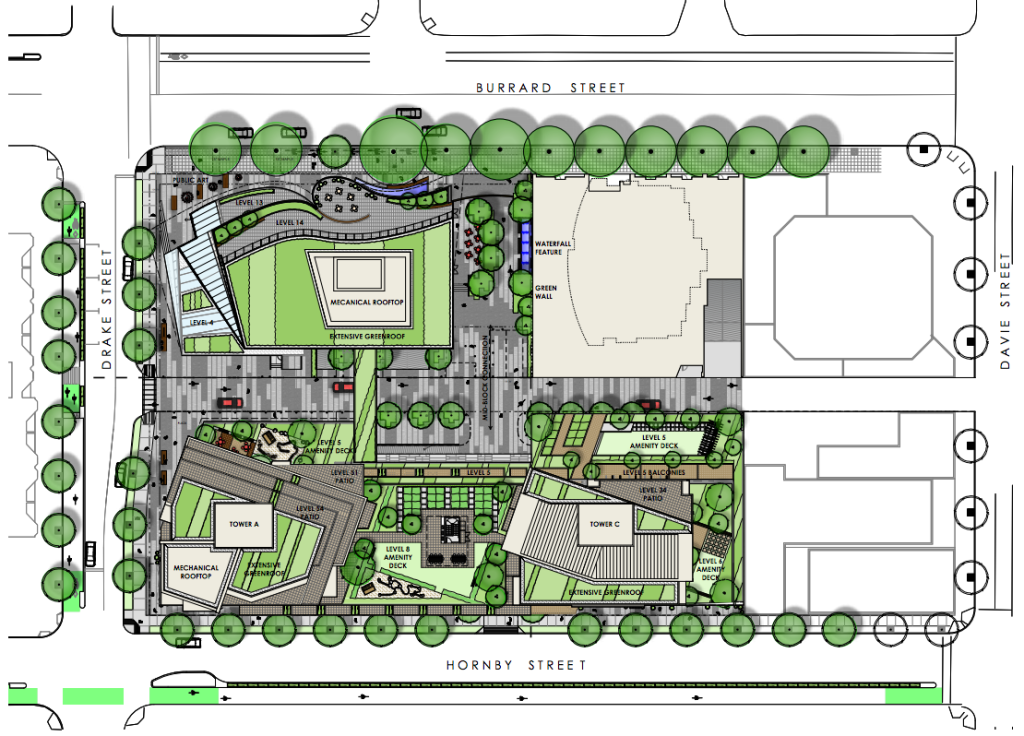 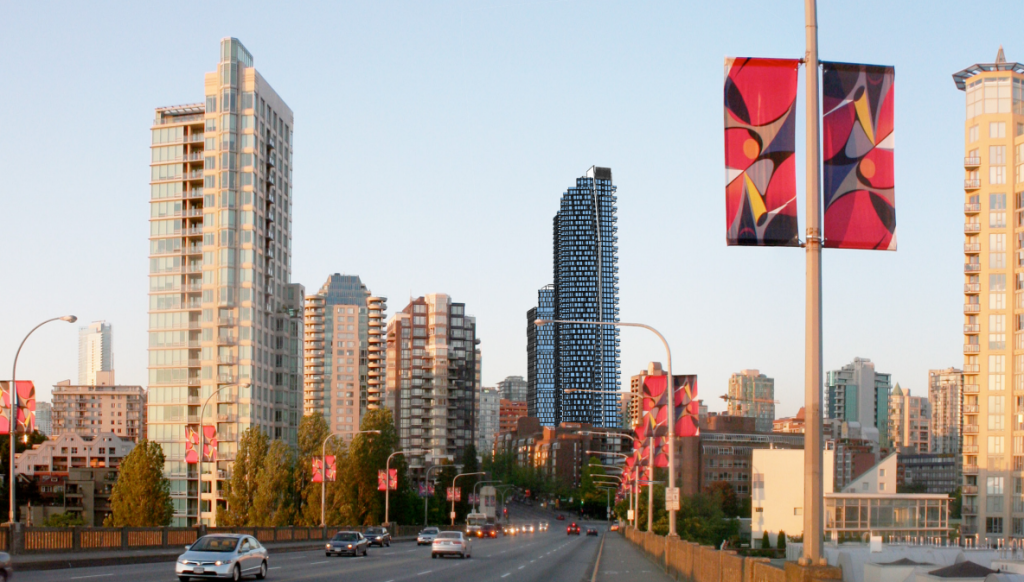 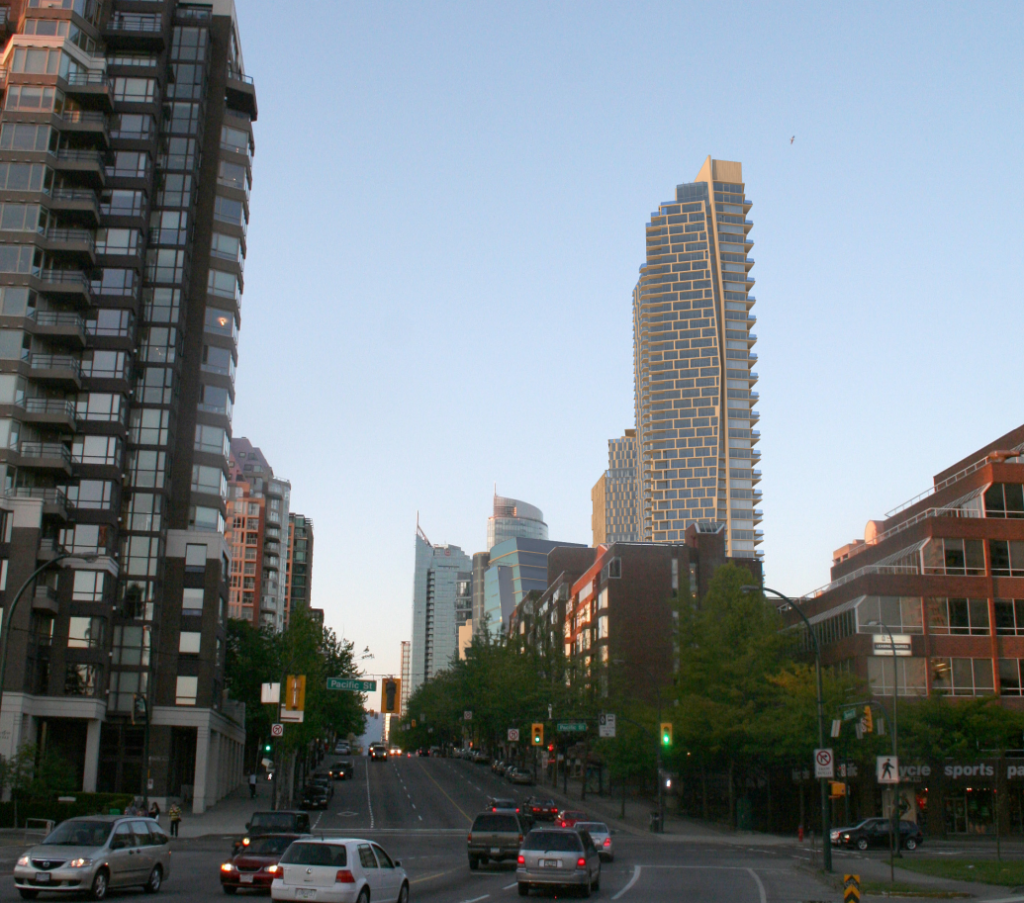 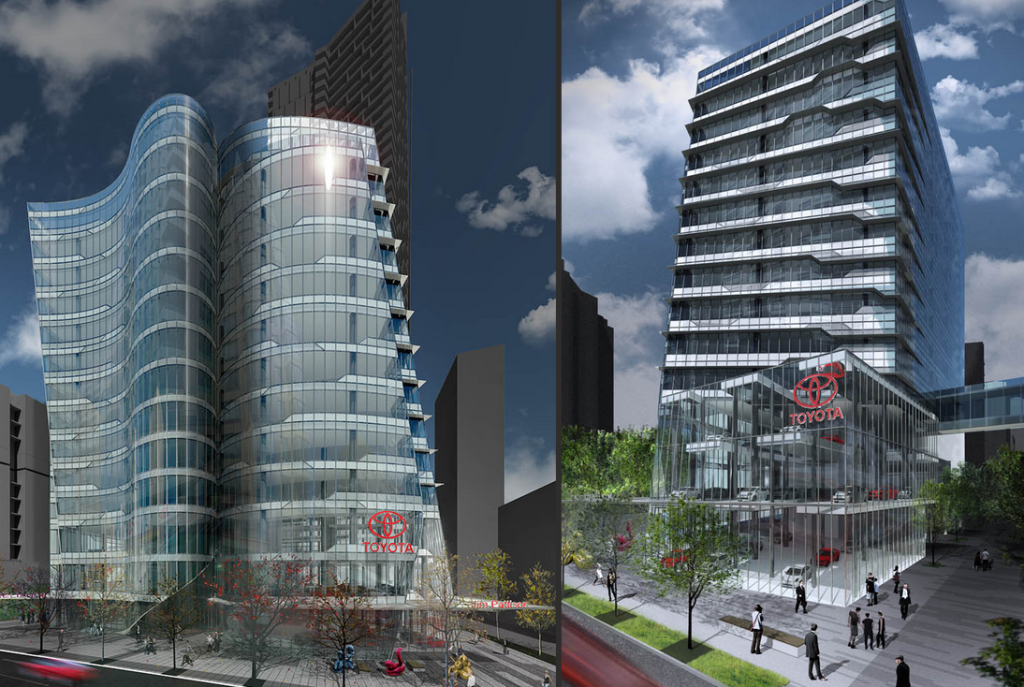 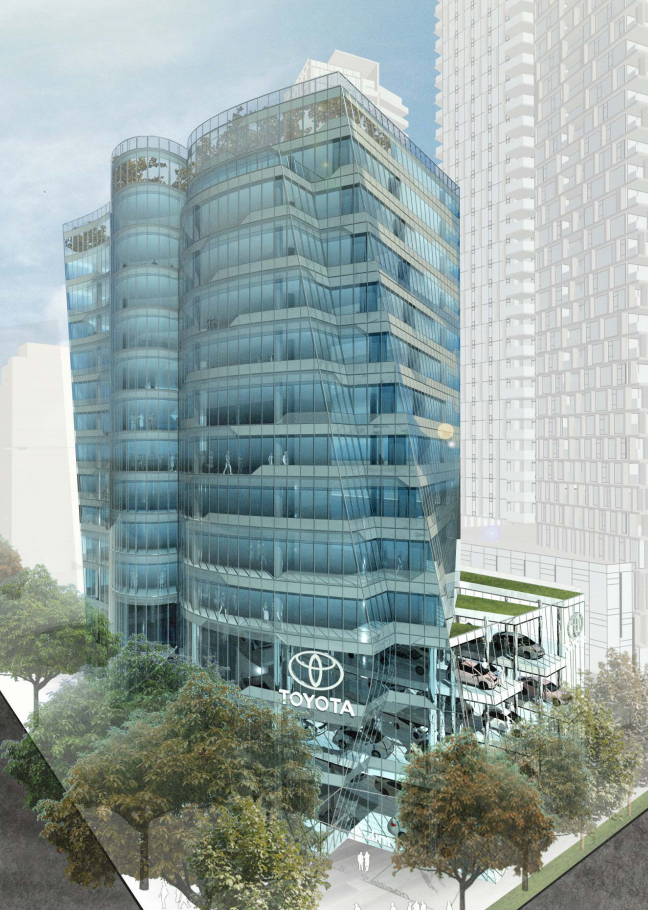 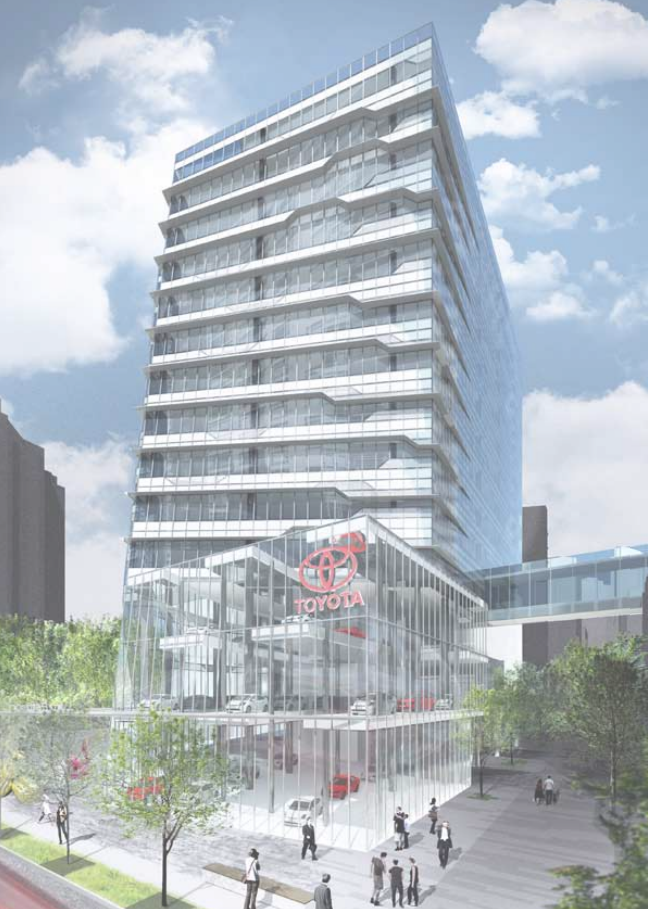 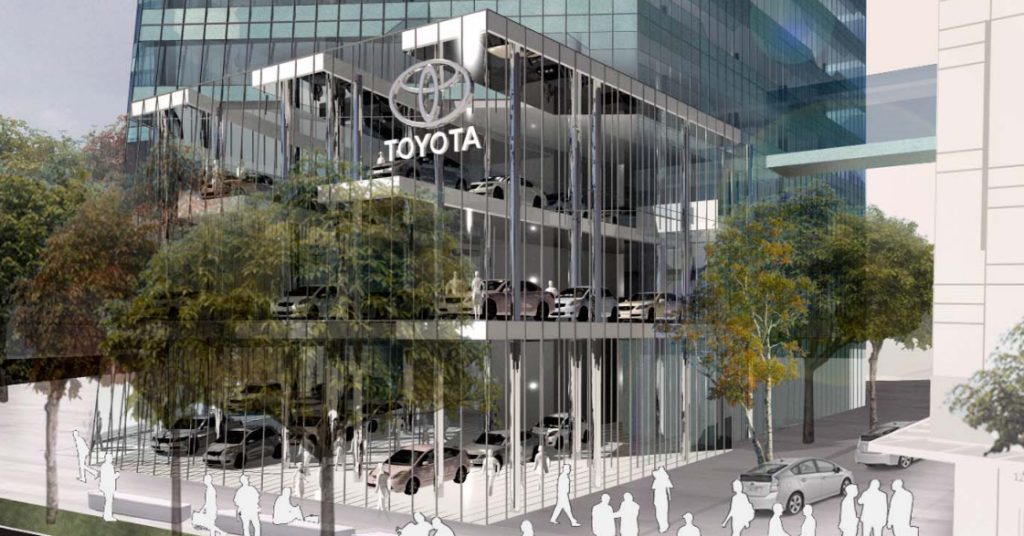 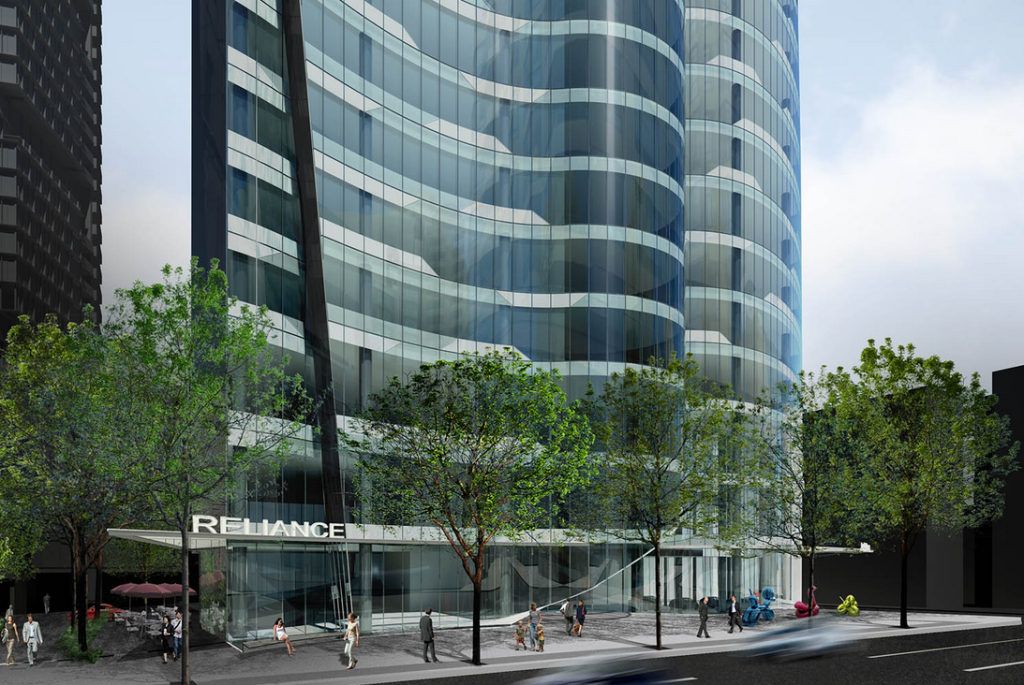 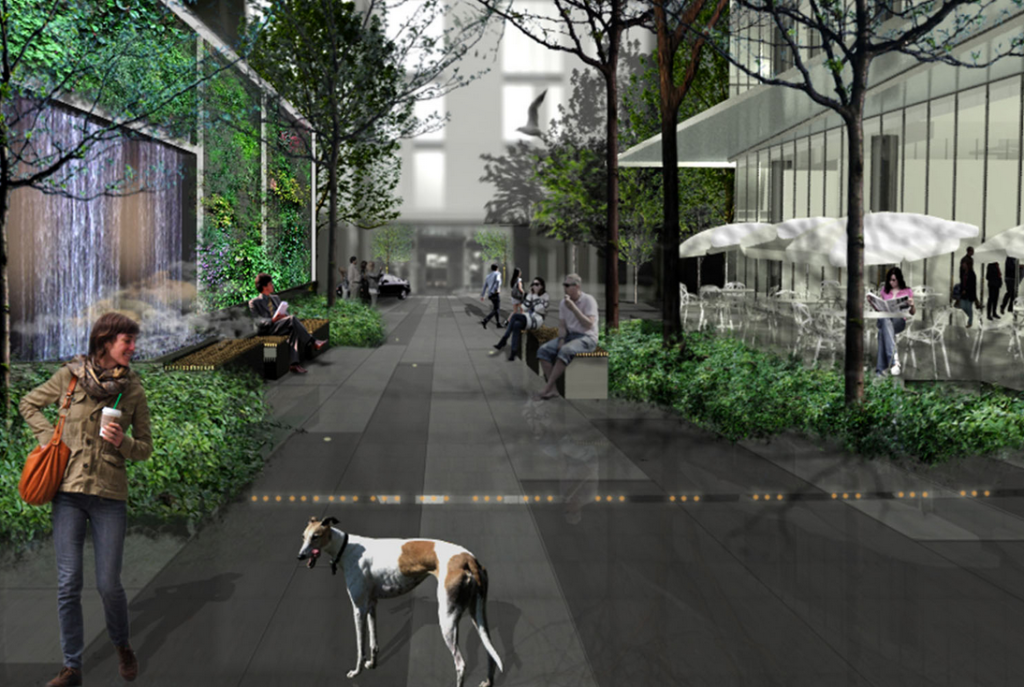 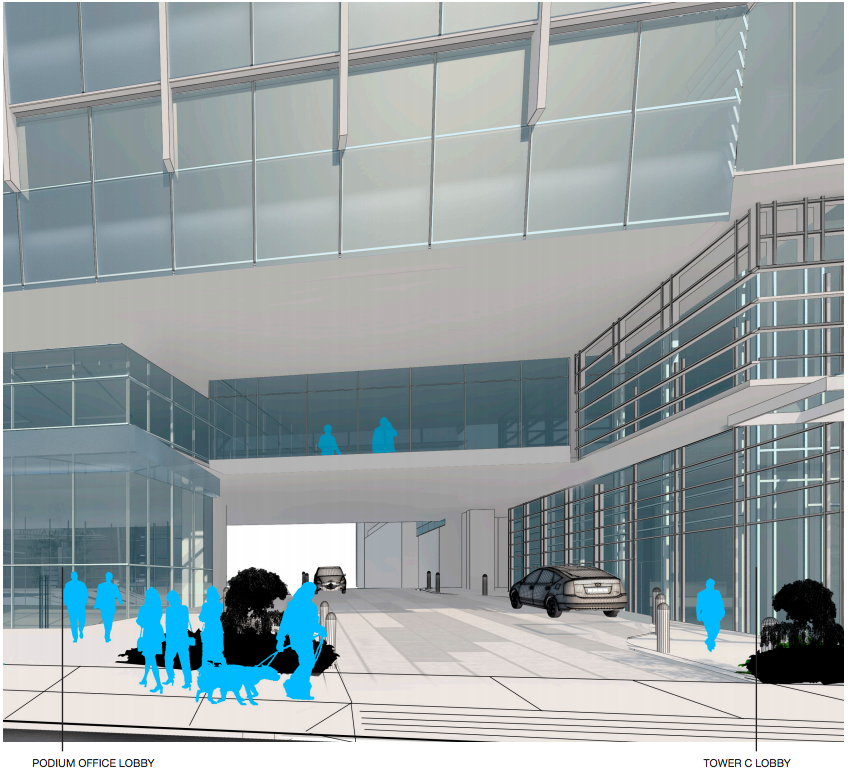 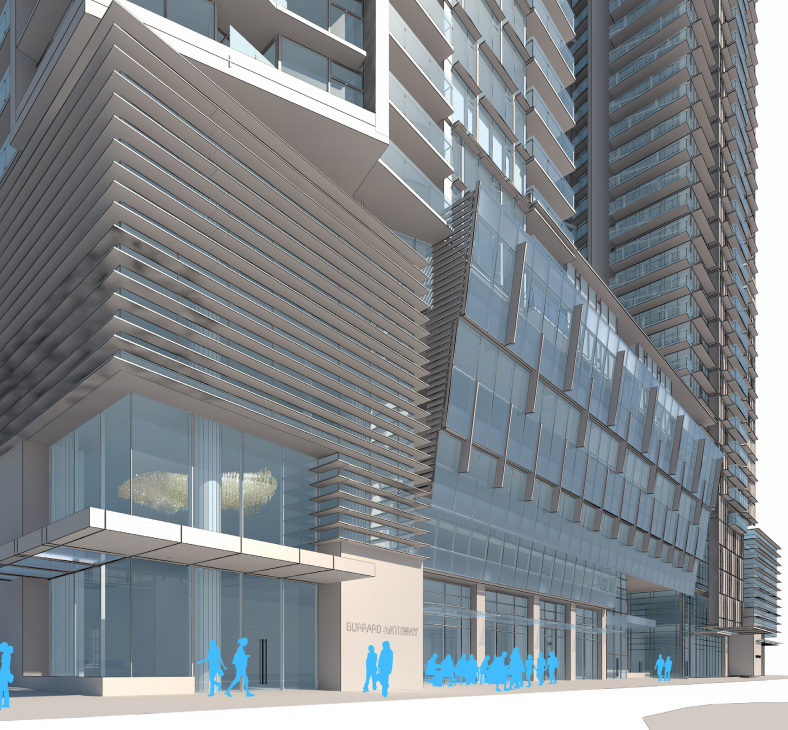 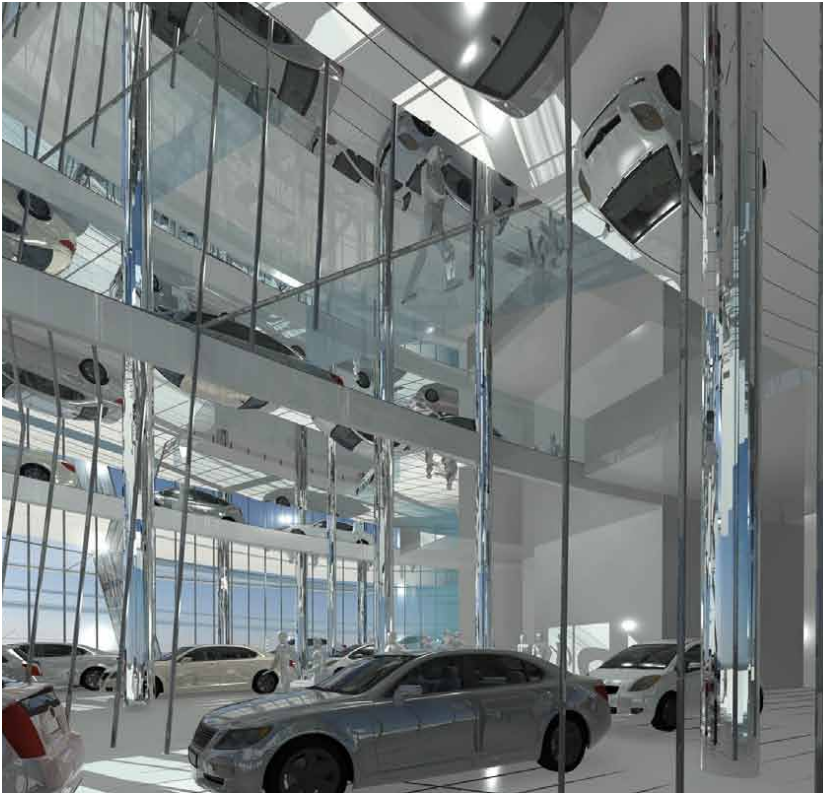 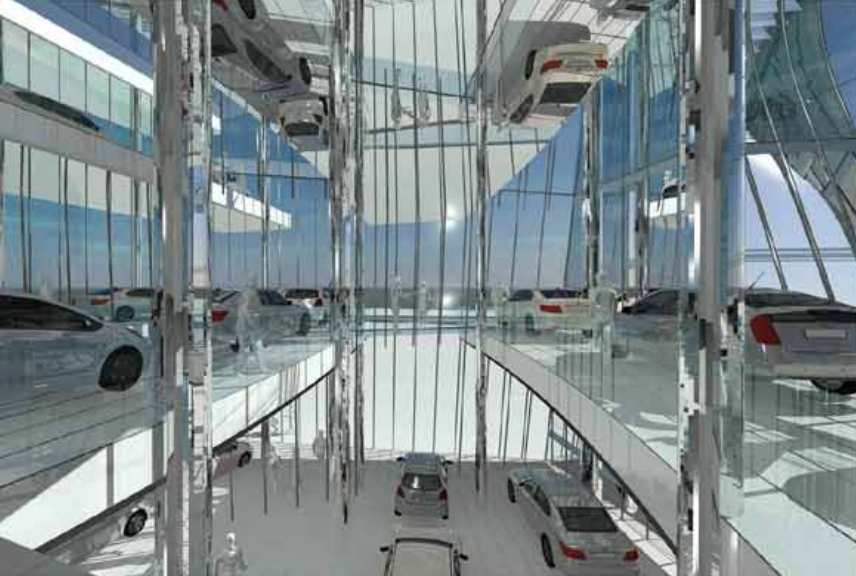 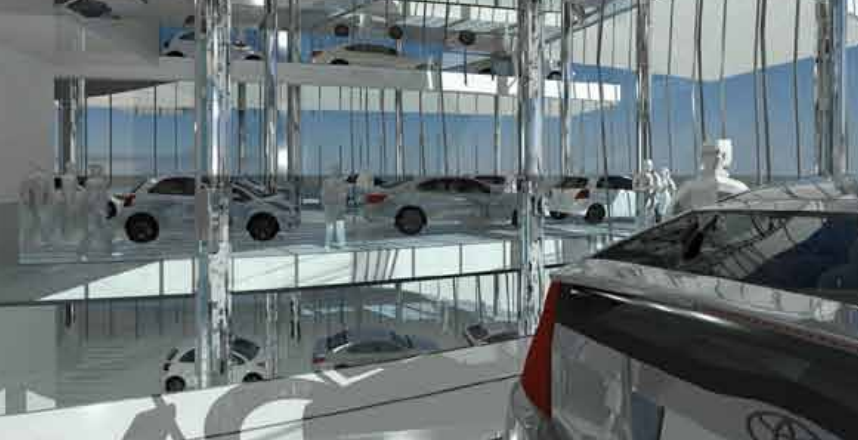 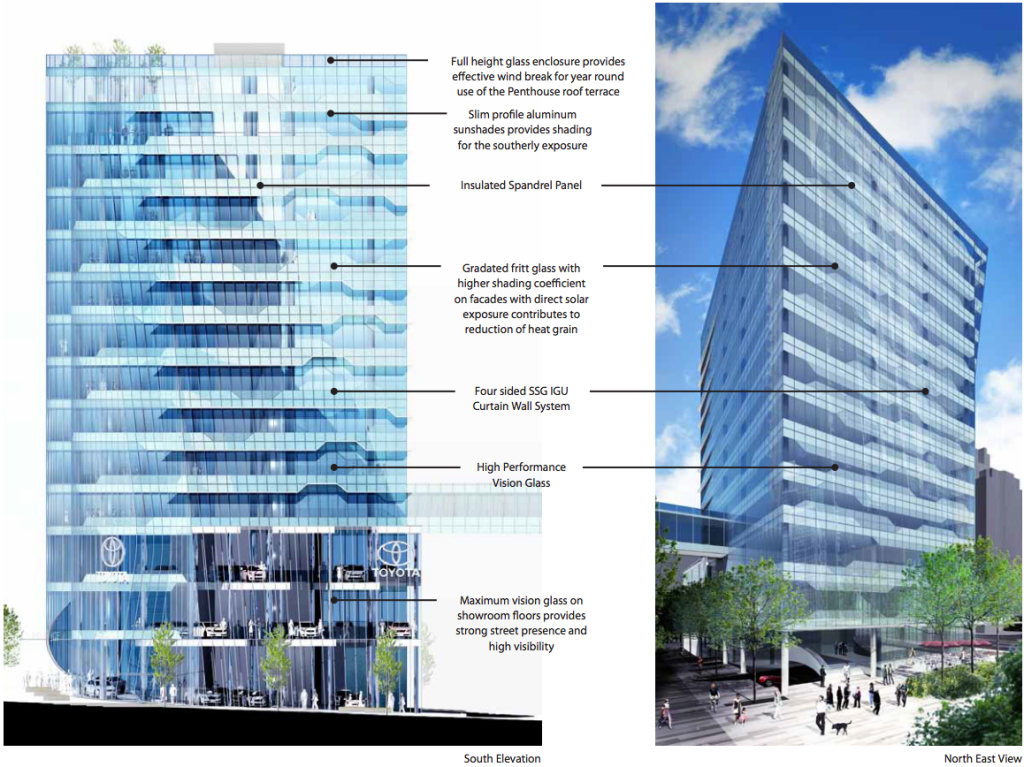 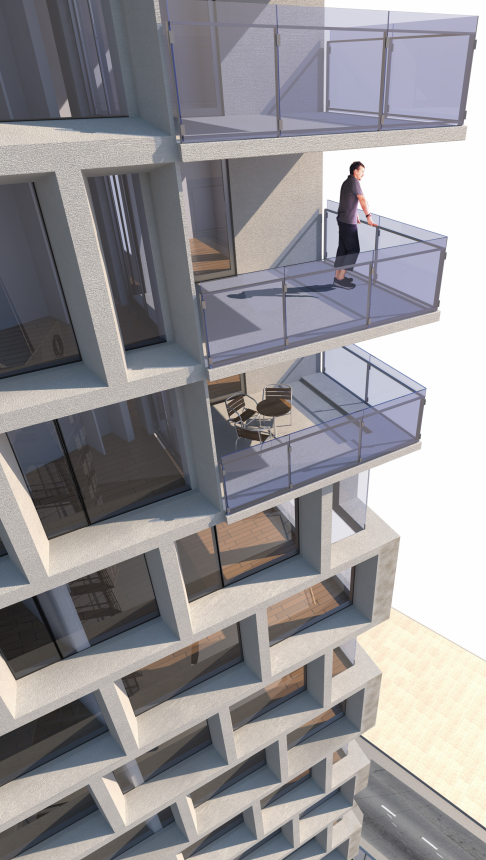