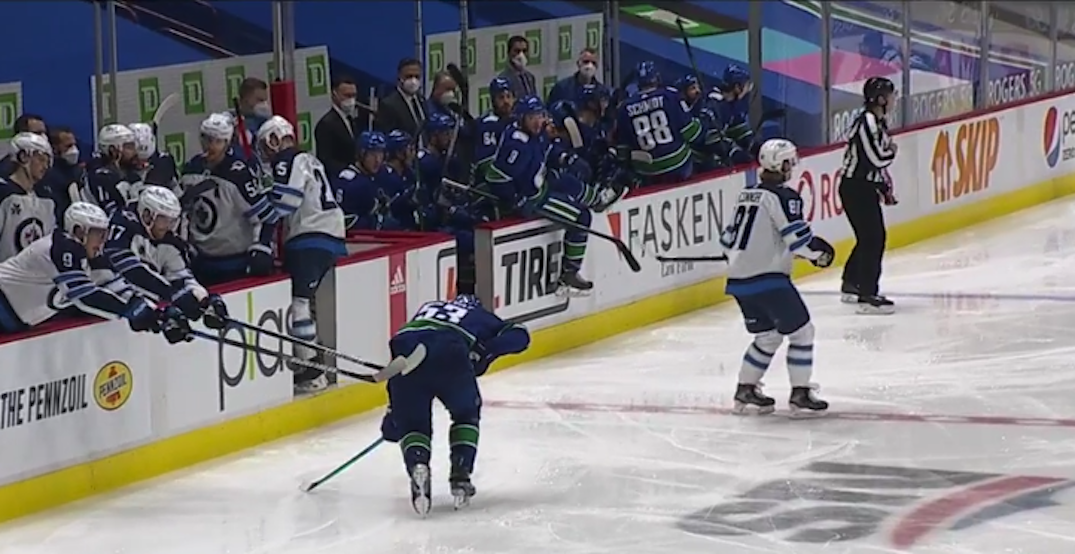 The Vancouver Canucks’ playoff hopes took another crushing blow on Monday night, in more ways than one. They lost the game 4-0, losing ground in the North Division standings, but that may be the least of their worries.

Captain Bo Horvat left the game early in the third period, after he inadvertently took an Alex Edler slap shot to his foot. Travis Green didn’t have an update on his status after the game, so the extent of Horvat’s injury is unknown, but it didn’t look good.

Horvat struggled to get to the bench, appearing to not put any weight on his left foot. He then fell to the ground in the hallway on the way to the dressing room — it was that painful.

Bo Horvat takes a shot from the point off his foot and goes down the tunnel in pain #Canucks pic.twitter.com/xcwdiXToqK

But while Horvat was in agony, a nice moment of sportsmanship emerged from the Winnipeg Jets bench.

Jets forwards Adam Lowry and Andrew Copp saw Horvat struggling to get off the ice, so they both reached out with their sticks to give him a helpful push.

Classy move by the Jets, trying to help Horvat get to the bench. #Canucks pic.twitter.com/oVMQNT8ZSk

“I think it’s one of those things, you see a guy go down, and he’s struggling to get to the bench. You’d hope someone, if you were in that position, would do the same,” Lowry told reporters after the game. “You’re just trying to give him a push. He’s such a good player for them, an honest player, plays hard. You see a guy go down like that, you just want to get him off the ice [because] you know how painful it is to get a puck in the foot, get a puck in the knee. I think me and Copper [Copp] were just trying to push him to get him there a little quicker.”

The move certainly resonated with Canucks fans, who were impressed by the class shown by a rival team.

That was so awesome!! Love that kind of sportsmanship! ❤️

Bo has earned respect in the league 👊🏼

This is why hockey IS the best game on the planet.

That’s the most Canadian thing I’ve ever seen from two Canadian teams..