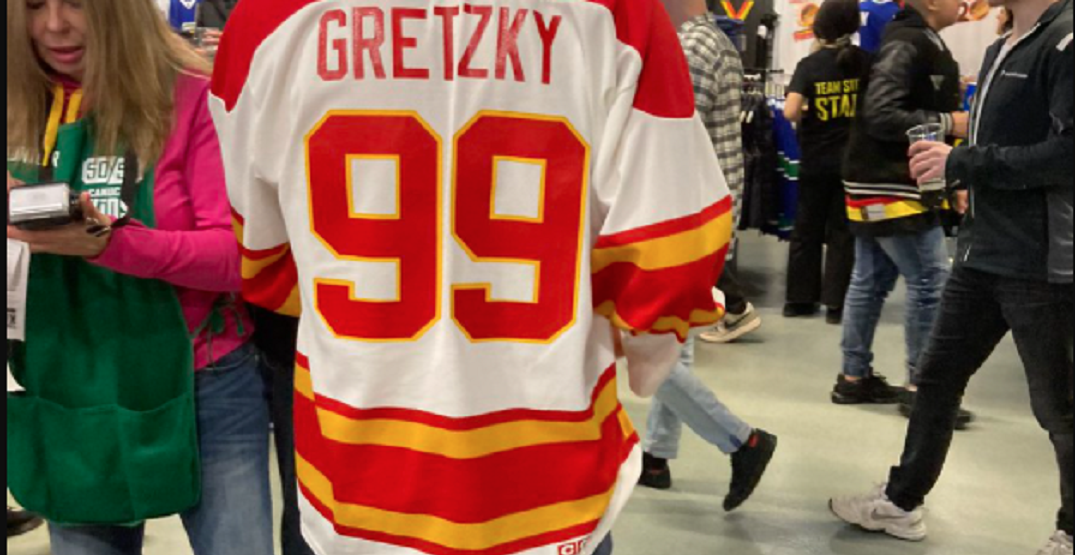 A Wayne Gretzky jersey is one of hockey’s instantly most recognizable uniforms.

Gretzky’s accomplishments for the game speak for themselves: a four-time Stanley Cup champion, nine-time Hart Trophy Winner as league MVP, 10-time winner of the Art Ross Trophy as the league’s leading scorer, and the game’s all-time leader in goals, assists, and points.

As you may know, Gretzky’s No. 99 is actually retired league-wide, meaning no player in the NHL moving forward can wear his iconic digits since his retirement in 1999.

But that hasn’t stopped fans from doing silly things with it.

At Rogers Arena in Vancouver on Saturday night, a fan was spotted wearing Flames jersey brandished with Gretzky and his famous 99 on the back while Calgary took on the Canucks. The jersey appeared to be bit of an older model, with a CCM tag adorning the uniform’s lower trim.

So I’m no hockey historian, but I don’t think Gretzky played for the Calgary Flames…@TheStanchion pic.twitter.com/eLfr6WSTgP

Playing with the Edmonton Oilers, Los Angeles Kings, St. Louis Blues, and New York Rangers, Gretzky had 69 goals and 161 assists for a total of 230 points in 117 games against the Flames in his career. Conversely, he had zero points for the Flames.

The Flames fan got the last laugh though, with Calgary topping the Canucks by a 5-2 score. Maybe the odd Gretzky uniform was good luck after all.