Vancouver’s second J. Crew location is now open at Pacific Centre! We passed by it this afternoon: it’s great news for the ladies, but not so great for the men and kids as this location only sells women’s apparel.

This is the American retailers second location in the city after its Robson Street opening last year. The new store is located near the food court in a space formerly occupied by American Eagle Outfitters (AEO was relocated to a unit near the mall’s Canada Line entrance).

Massive changes are coming to Pacific Centre beginning in late-2014 with the opening of a major expansion of the shopping mall level in the former Sears men’s basement level. Beyond many more new retail spaces, this mall expansion will include a new direct street entrance from Robson Street. Canada’s Nordstrom flagship will also be opening in the levels above the mall expansion inside the former Sears building in early-2015.

An artistic rendering of Pacific Centre’s retail expansion in 2014 in the space that was formerly the Sears men’s department. Rendering by Cadillac Fairview. 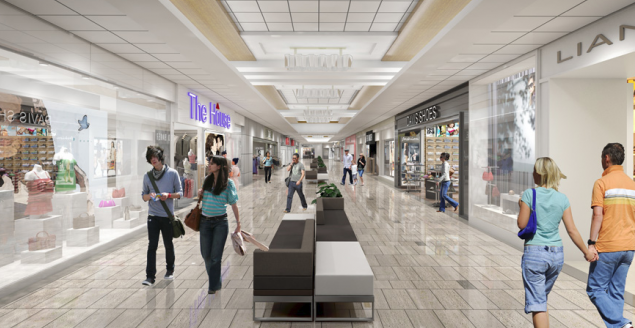