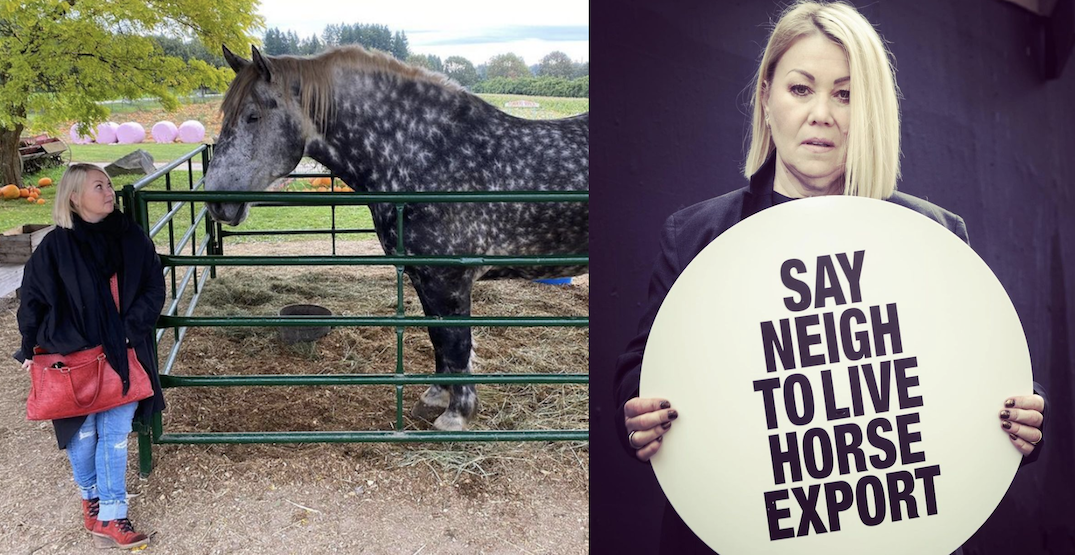 Alberta is known for its wholesome cowboy image, but Canadian singer-songwriter Jann Arden is working to bring light to a darker side of the agriculture industry: the transport of horses overseas for slaughter and consumption.

Arden says that raw horse meat is considered a delicacy in Japan.

“It’s a status thing,” she told Daily Hive in a phone interview.

“It’s not an everyday-man food. It’s not on the table of the average hardworking Japanese family.”

She compares it to a Canadian eating lobster or truffles on a daily basis.

According to a petition supported by the Canadian Horse Defence Coalition (CHDC) that’s aimed at ending this export, large draft horses over 17 hands high are being air-shipped annually from Calgary, Edmonton, and Winnipeg airports to Japan for human consumption. Three to four horses are loaded into crates smaller than a single horse stall, which creates a lack of sufficient head clearance.

The petition, which is sponsored by MP Nathaniel Erskine-Smith, notes that these flights are up to 13.5 hours long, with additional time for ground transportation and the loading and unloading process. During this time, horses have no access to food, water, or rest.

Furthermore, according to the petition, horse deaths and injuries have occurred on these flights, as well as broken crates and one known incident of aircraft fuselage damage, and scientific evidence shows that horses suffer physically and psychologically during long-distance transport as well as loading and unloading.

“It’s one thing to fly a person overseas,” Arden says. “A pilot usually comes on and tells you ‘there’s going to be turbulence, please put your seatbelts on.’ These horses are shoulder-to-shoulder in wooden crates, and it’s easily a two-day trip.”

The live export of draft horses to Japan is nothing new. In the United States, horses were bred for export and consumption until 2006. Public outcry and petitioning pressured the government into cancelling funding for horse-slaughterhouse inspections, which, in turn, sidelined the industry.

But this didn’t end the export of horses altogether. When the US industry came to a halt in 2006, Arden says that a large number of horses were sent to both Mexico and Canada.

“They’re not coming up here for a 10-year-old girl to ride. They’re coming up here to be mistreated, put into feedlots, and slaughtered,” says Arden.

She goes on to add that there are “four or five different guys” in this industry in Alberta. They receive approximately $5,000 a head for these horses, and, says Arden, “they just laugh their way to the bank, they don’t give a shit.”

“The fact that they’re registered as a farm is offensive to farmers.”

The Government of Canada’s “Live horse exports to Japan – Know the facts” page states that “Canadian Food Inspection Agency (CFIA) veterinary inspectors are present for each air shipment to certify the export as required by the Health of Animals Act.“

According to the Government of Canada, approximately 40,000 horses have been transported to Japan from Canada since 2013, and the CFIA is only aware of five deaths during air shipments.

Arden has been working with the CHDC to put an end to this little-known Canadian import, and launched a campaign in 2020 to bring more attention to the issue.

“You look at the interaction between horses and humans, even over the last 40,000 years,” says Arden. “They’ve been companions, they’ve carried us, they’ve dragged us, they’ve plowed fields, they’ve hauled logs, they fought by the millions in the first and second world wars, they are therapy animals, they console.”

Arden references poetry from the late 19th century, and the famous words of the “cowboy creed.”

“‘A cowboy never eats his horse,'” she says. “It’s the last thing you ever do. And that’s the western way.”

But the singer isn’t trying to dictate whether or not people consume horse meat. “This isn’t about what you eat or what you don’t eat,” she adds. “We’re stepping out of that arena. This is just about being humane and kind and caring about the treatment of horses.”

The campaign, aptly named #Horseshit in a bid to win the public’s attention, aims to spread the word through social media presence, a website, and a donation page. Supporters can also purchase #Horseshit apparel and stickers to help bring awareness to the issue.

Website visitors are greeted by an eye-catching pink button that reads “sign the petition,” linking them to the official House of Commons page. Although the petition isn’t near the 100,000 signatures required by June 18 to present it for debate in Parliament, Arden encourages Canadians to sign it anyway.

“We just wanted to have something to start this conversation. But we’ve all been really pleasantly surprised. I think when the dust settles, we might be sitting at around 40,000 signatures. Which is a lot!”