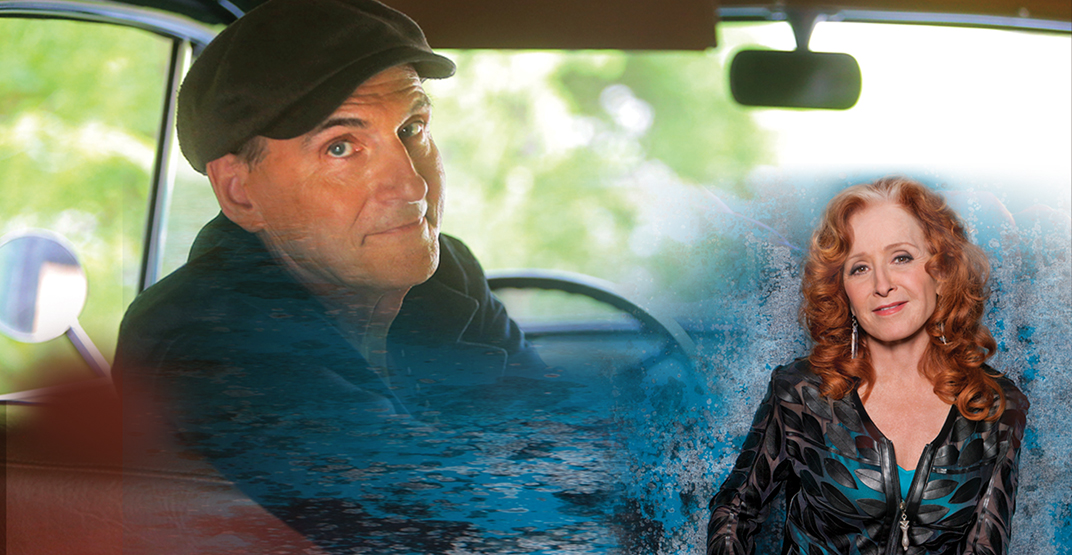 Five-time Grammy Award–winner James Taylor and His All-Star Band are teaming up with special guest, best-selling artist, and accomplished songwriter, Bonnie Raitt, for a Coast to Coast Canadian Tour.

The tour kicks off in Victoria, followed by a show here in Vancouver on Wednesday, April 15 at Pepsi Live at Rogers Arena, before going on to Edmonton, Calgary, Winnipeg, Ottawa, London, Toronto, Montreal, Halifax, and Moncton, wrapping in St. John’s.

Already, the show has earned rave reviews in the US. It has special meaning, celebrating a friendship between Taylor and Raitt that spans several decades. Taylor is one of the best-selling artists of all time, and in 2000, he was inducted into the Rock and Roll Hall of Fame.

His warm voice and distinctive style of guitar-playing with songs like “Sweet Baby James” and “October Road” have won him millions of fans throughout his music career. The artist released his first studio album in nearly 13 years in 2015 with Before This World, which became his first-ever number one album.

Raitt’s top hits emerged from her albums Nick of Time and Luck of the Draw, with tracks “I Can’t Make You Love Me” and “Something To Talk About.” Dig In Deep, her most recent album, dropped in 2016, with original music that conveys the star’s creativity as well as her daring style.

Tickets for Taylor and Raitt’s concert start at $45 (plus fees) and go on sale via Ticketmaster Friday, December 6 at 10 am. Each ticket sold will include a CD copy or digital download of Taylor’s forthcoming album, which will be released early next year.

When: Wednesday, April 15
Time: 7:30 pm
Where: Pepsi Live at Rogers Arena — 800 Griffiths Way, Vancouver
Tickets: Starting at $45 (plus fees) — Available via Ticketmaster from Friday, December 6 at 10 am